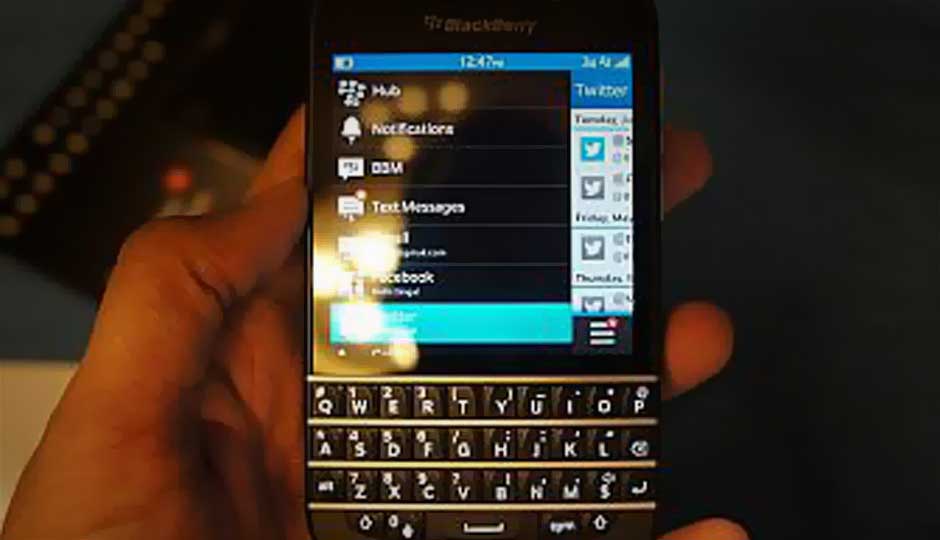 It is all fair and haughty to say that no-one wants a QWERTY phone anymore, but that would just mean looking at the entire ecosystem with myopic vision. There is still a fairly huge demographic that wants a QWERTY keyboard, for their mails, documents etc. And there are those who aren’t comfortable with a touchscreen, no matter what. What the Q10 does, much like the Bold Touch 9900, is bring the two together – the touchscreen with the physical QWERTY. While the 9900 was still handicapped by the fact that OS7 wasn’t optimized for touchscreens, BB10 pretty much takes to that like a fish to water. And that’s how it was made.

We had a chance to use the device at the event, and have conjured up some initial impressions.

The Q10 retains the familiarity aspect, for the most part, with the previous range of QWERTY phones from BlackBerry. The logic “if it isn’t broken, why fix it” applies here as well. 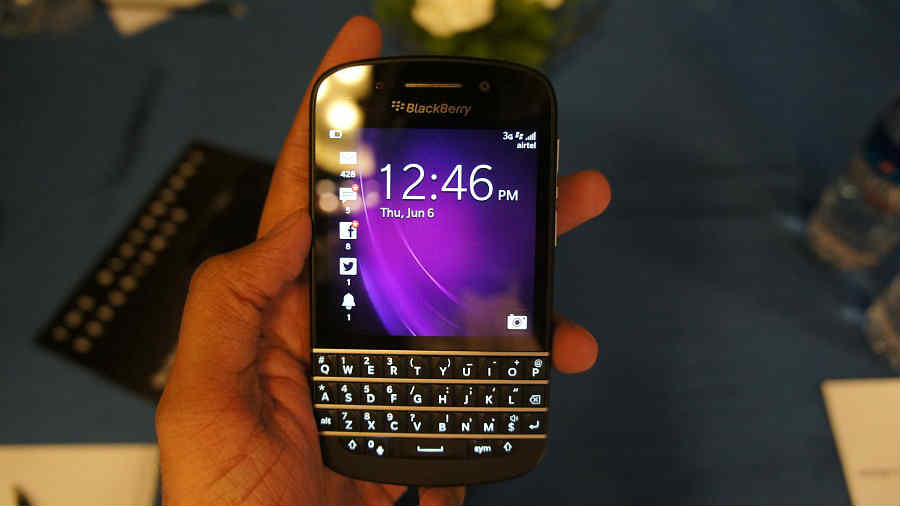 The build quality is fantastic. It feels premium. It feels upmarket. There is a metal frame, and the battery cover is what BlackBerry calls the Carbon Weave Casing. It is very light, yet incredibly strong. BlackBerry representatives demoed how you can completely bend that piece and yet it will neither break, crack or lose its shape. They also went on to explain how each of these glass weave panels has a unique fingerprint, explained by the analogy of zebra stripes! 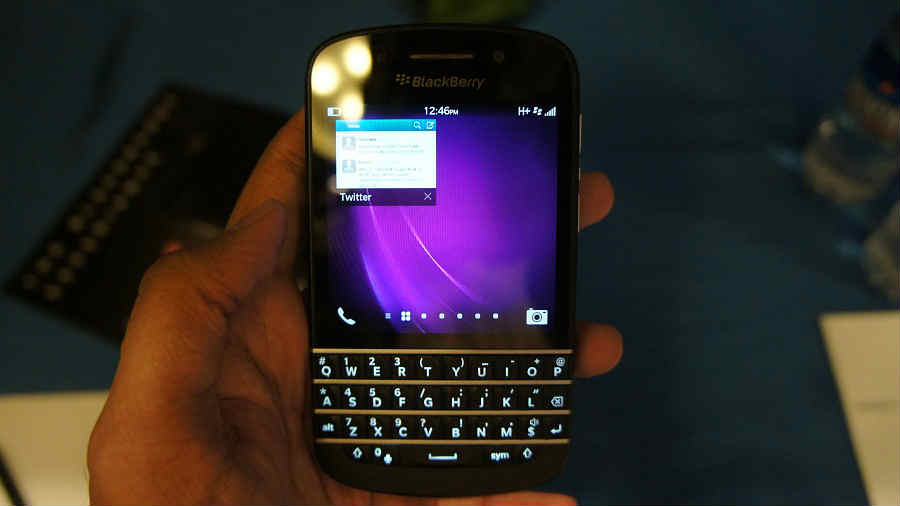 BlackBerry also went on to explain how each phone is made, individually. Every unit gets carved from a unibody block of cold forged stainless steel, and each chassis individually takes 20 minutes to be put together. 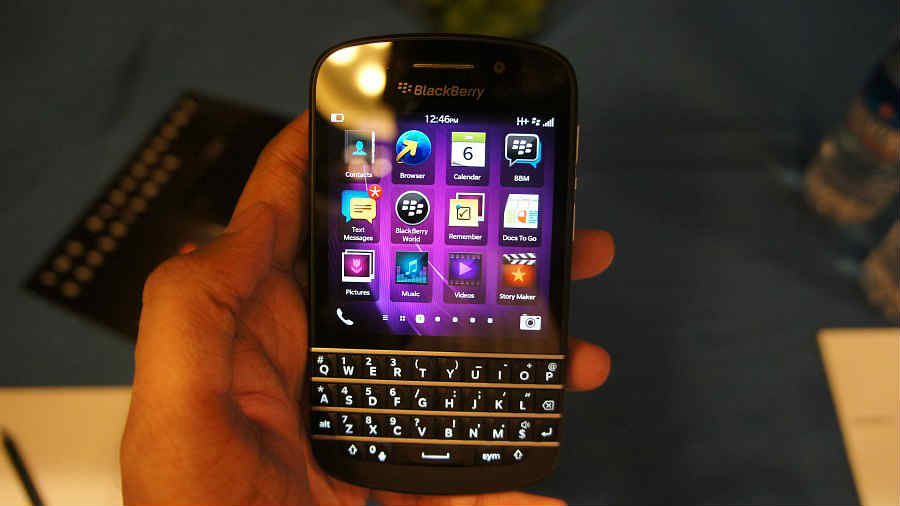 While the Q10 does feel a tad thicker than the Bold 9900, it still feels very comfortable in the hand. At 139 grams, it isn’t the lightest phone around, but you don’t really feel the bulk. 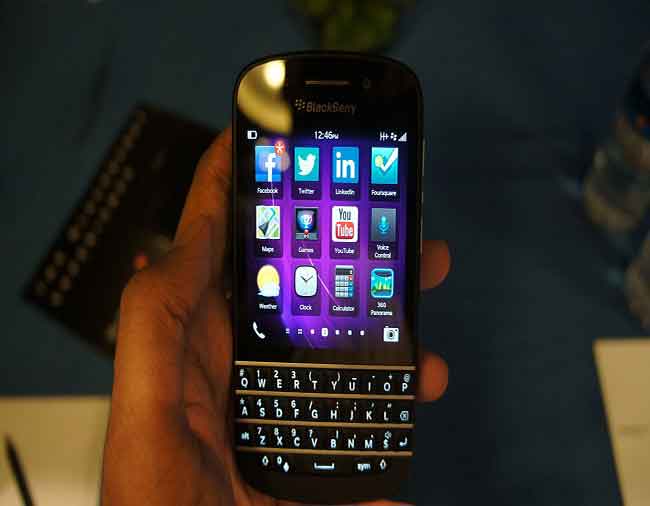 The BlackBerry Q10 will be available in two colours – black and white. We quite like the idea of matte finish, which will be easier to maintain and less prone to scratches etc. 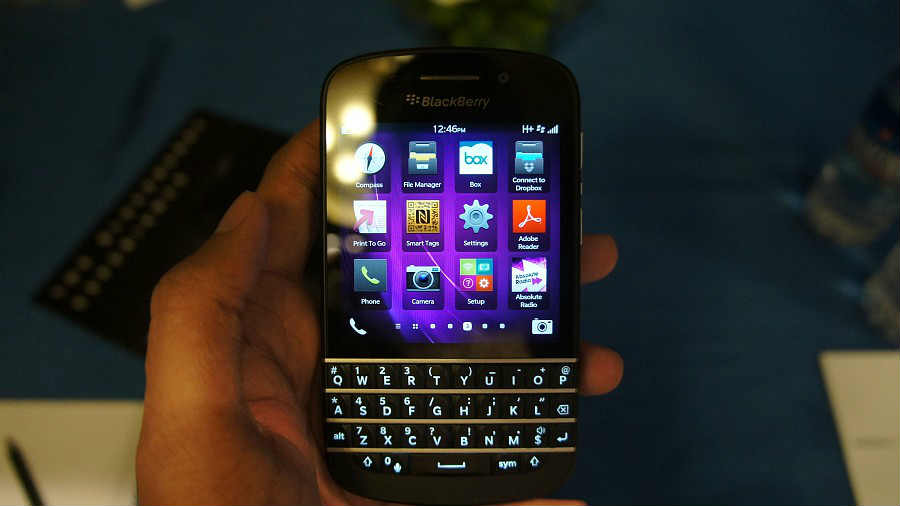 Now, for the most important part – the QWERTY keyboard. The keys on the Q10 are slightly bigger than the Bold 9900, mostly because of the extra space afforded by doing away with the call connect, and disconnect, menu and return keys and the optical track pad that usually sit below the display. The only way to navigate around the UI is via the touchscreen, including receiving and making calls. This will take some getting used to, but should not be a steep learning curve. 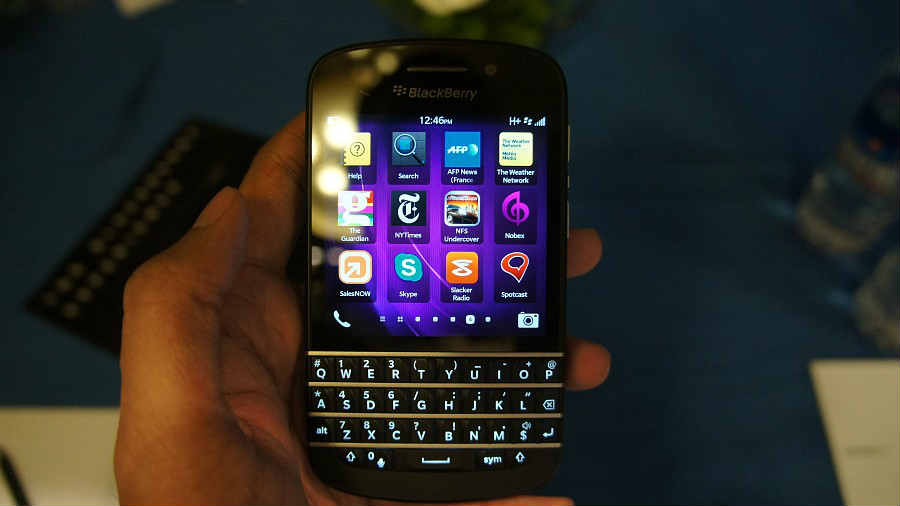 BlackBerry has always understood keyboard very well, and that shows with the Q10. The bigger keys, the arc on each key and the edge to edge layout make these very comfortable to use, and will actually entice you to type quicker. 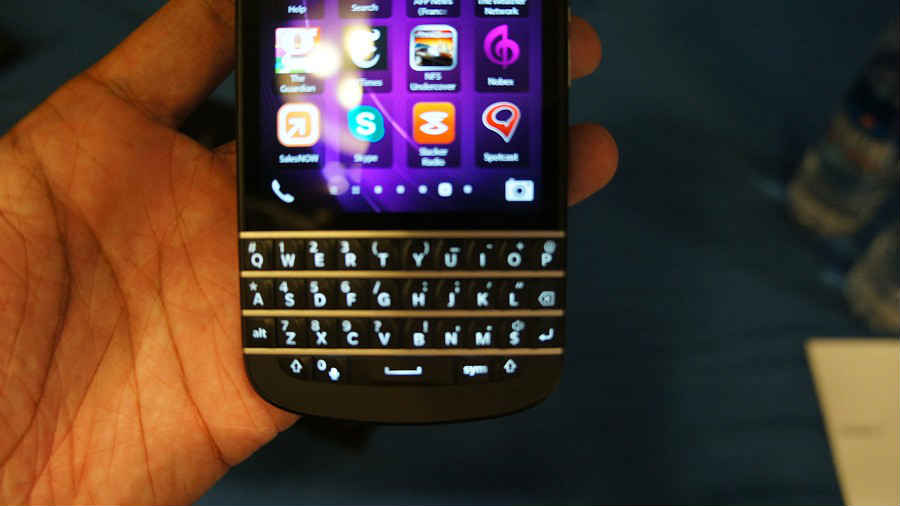 One difference over the previous-gen Bold keyboards is that this layout keeps the keys completely flat. There is no slight curve upwards on both sides. This is just a simple design element, and doesn’t present a learning curve at all.

The Q10 packs in a large 2100mAh battery. We will only be able to talk about its performance when we test the phone in greater detail. 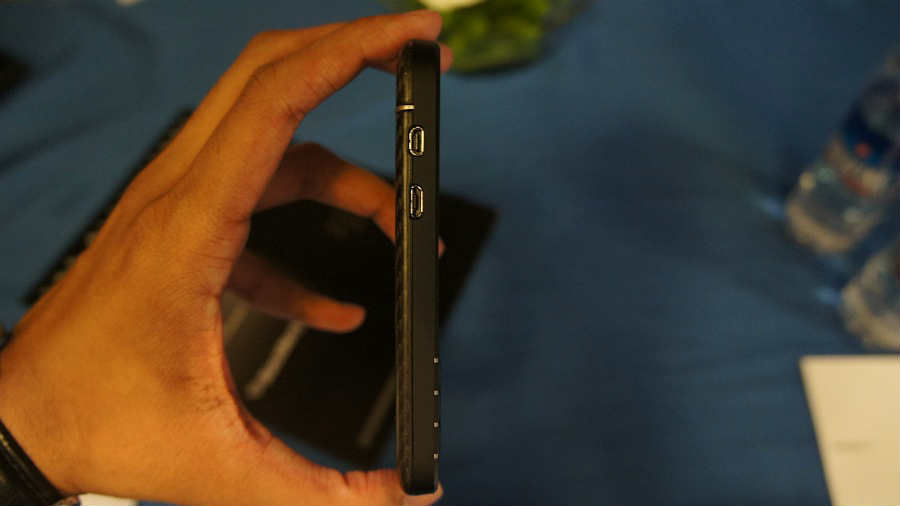 BlackBerry talked about the noise cancelling triple microphones, which make call quality better. Again, that is something we will test in detail. 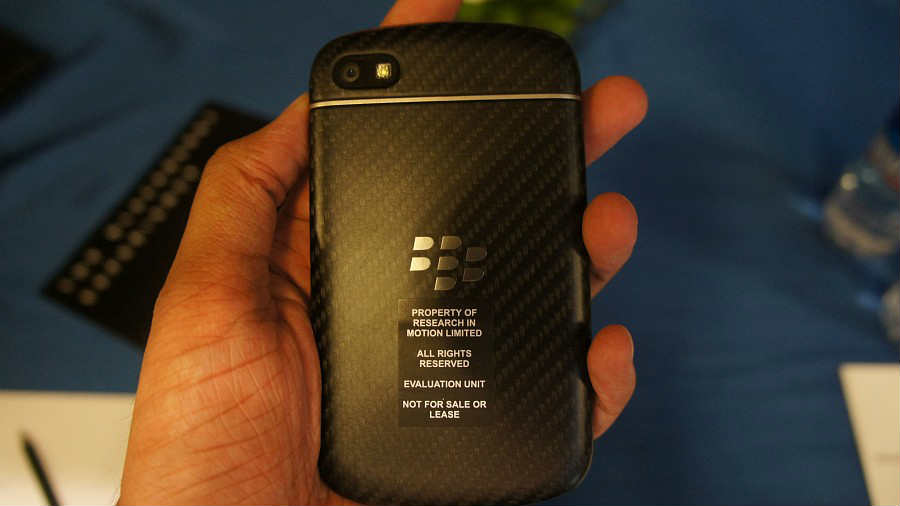 BlackBerry have packed in an upgraded antenna in the Q10, which reduces battery consumption in low signal areas. 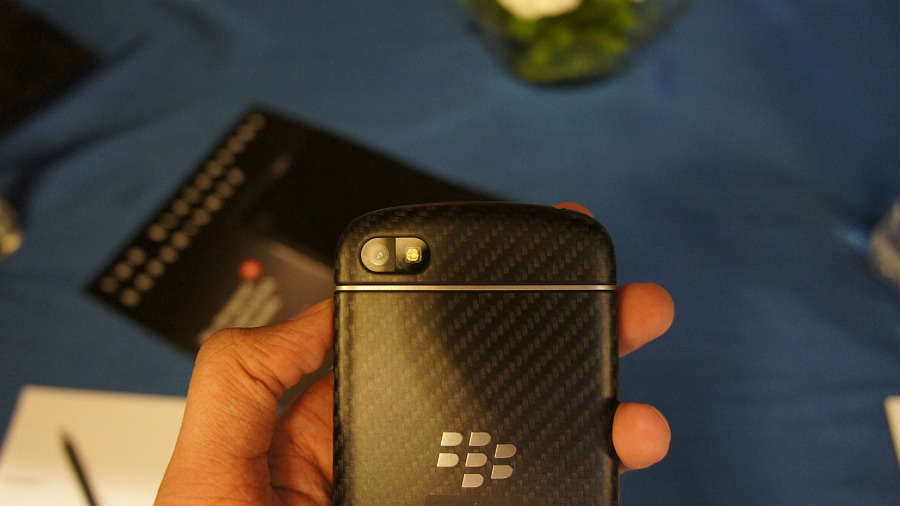 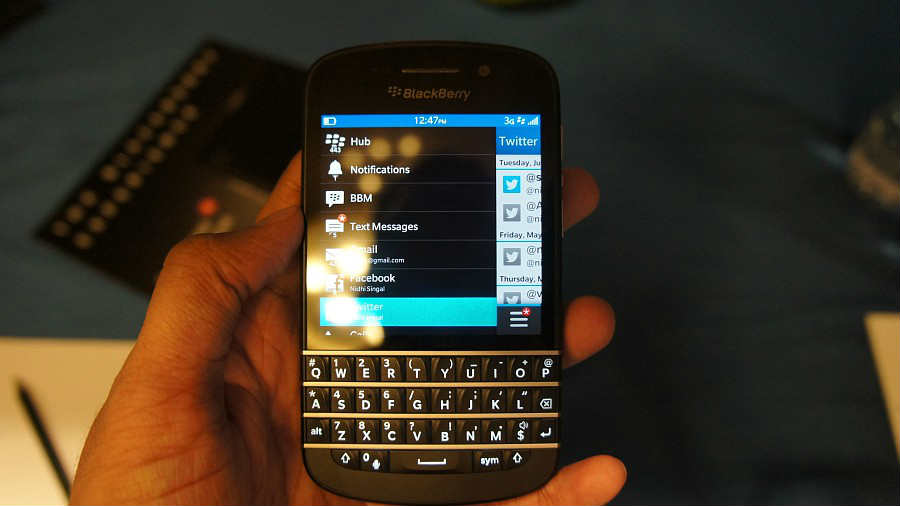 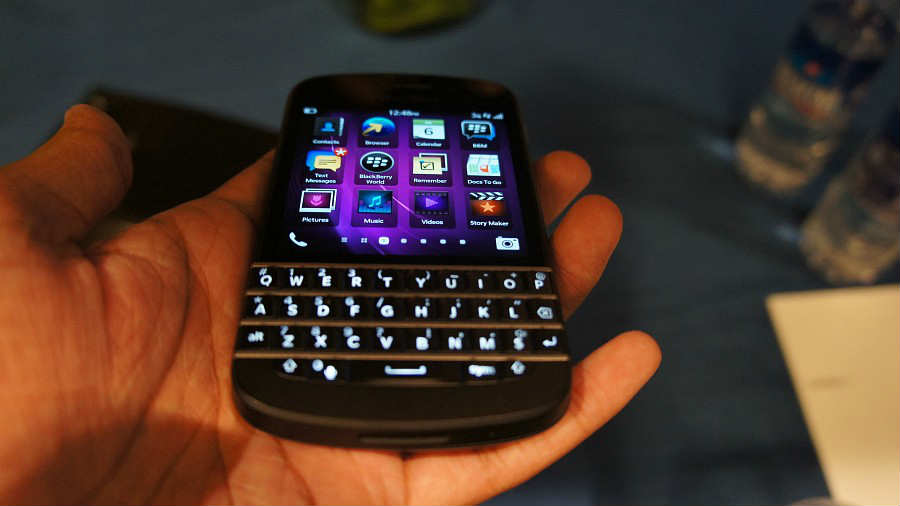