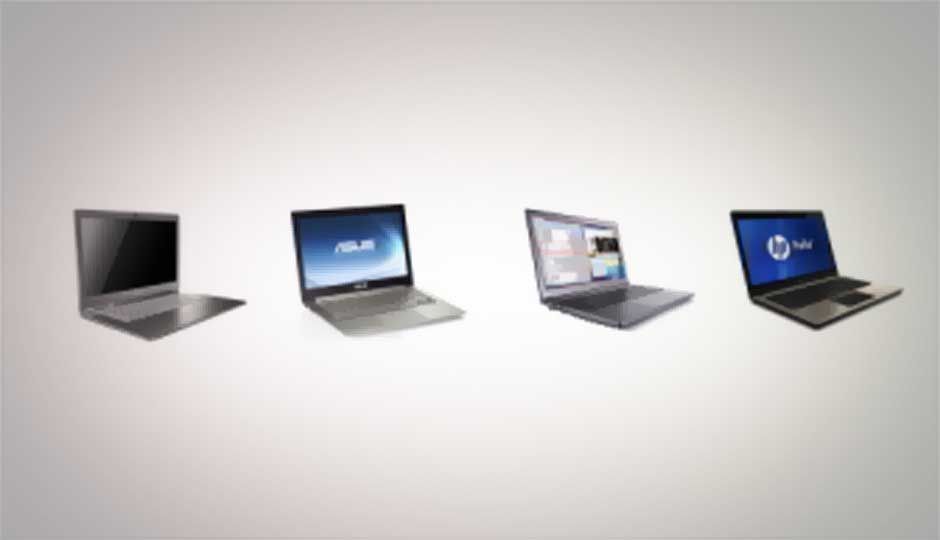 When it comes to mobile computers, Intel’s latest standard for notebooks- the Ultrabook is the hottest segment today. Ultrabooks are sleek, sexy, thin but powerful new-age variety of laptops, hinting towards the future of computing devices. Intel has gone on record to state that 40% of laptops launched this year will be ultrabooks, that manufacturers will flood the market with over 70 different types of ultrabook offerings globally. Such a remark from someone who makes chips that goes into hundreds of thousands of laptops every year is definitely a sign of things to come.

Our comparison test includes ultrabooks from four brands -- Acer, Asus, HP, and Lenovo. We are yet to receive products from Dell, Toshiba and Samsung. The four models under review are priced between Rs. 50,900 to Rs. 99,999.

Here is the specifications comparison table for the 4 ultrabooks along with their pricing.

Build & Design
Although Intel has an established roadmap with respect to the processor architecture, the defining physical attributes for an ultrabook are still largely its slimmer, thinner dimensions. The Acer Aspire S3 and Lenovo IdeaPad U300s are less than 0.7-inch in thickness, while the Asus Zenbook UX31E and HP Folio 13 are slightly thicker than 0.7-inch, but still thinner than 1-inch, when measured with their lid closed. None of the bundled laptops weigh more than 1.5 kg, which is the weight of the “heaviest” ultrabook -- HP Folio 13. All four ultrabooks in the comparison sport metal screen lids, with two sporting an all-metal exterior (Asus, Lenovo) while the other two having to make do with reinforced plastic shells (Acer, HP). While the Lenovo and Acer ultrabooks have smooth metal lids, the HP Folio 13 and Asus Zenbook up the ante a bit with brushed finish that feels excellent on touch.

Despite their razor thin dimensions, all the featured ultrabooks have good build quality -- although, we think the Acer Aspire S3 could be a little more rugged, but there its super-slim profile is to blame more than anything else. Another common thread across all the ultrabooks currently is their form factor -- all four ultrabooks have a 13.3-inch screen, with the Asus Zenbook sporting the highest resolution screen at 1600x900 pixels. All ultrabooks sport locked battery compartments that can’t just be pulled out.

Features & Performance
All four ultrabooks sport new 2nd-gen Core i5 and Core i7 processors. None of the ultrabooks have an optical drive or separate mouse buttons on their trackpad. All ultrabooks come with at least two USB ports, audio jacks and one output video port. Out of all the ultrabooks, we really liked the typing experience on the Lenovo IdeaPad U300s and HP Folio 13 keyboards. No problem with the Acer Aspire S3’s keyboard and trackpad, but the Asus Zenbook’s trackpad and mouse buttons are just plain difficult to use.

All ultrabooks managed to achieve the 2-hour mark in our battery tests -- Asus fell under by 7 minutes, while HP Folio 13 went over and above that mark by a long shot! Just like Intel claimed, the ultrabooks don’t compromise on brute performance despite their anorexic dimensions. Oh, no sir! How could they if all of them are sporting Core i5/Core i7 processors and fast-paced SSDs? HP’s Folio 13 won the performance crown in a closely fought contest, with Asus Zenbook coming in second. Despite multiple benchmark runs and double-checking, HP’s Folio 13 etches out the Asus Zenbook despite running on a slower processor. Trust me, it baffled us to no end, but no matter what we did, the scores didn’t change (although logic dictated otherwise).

All four ultrabooks can handle multitasking with various apps,watching HD 1080p flicks, music and day-to-day apps with ease. These ultrabooks don’t have great depth in onboard audio, but they are okay for personal entertainment. No doubt, as more manufacturers launch ultrabooks in the coming months, refinement in quality of user experience and fine-tuning components will be high on their agenda.

WinnerThe HP Folio 13 is our Best Performer, showcasing great processing power with its CPU-SSD combination, beating most other mainstream, general purpose laptops as well. The only thing it doesn’t have is dedicated graphics -- none of the ultrabooks presently have discrete graphics, though. All these ultrabooks challenge the might of Apple’s MacBook Air in design, features and performance in varying degrees, and some actually manage to successfully beat it -- especially the Asus Zenbook UX31E.

For more news and features involving Ultrabooks, check out our previous coverage...