Hands on with Acer's Kepler-powered Ultrabook 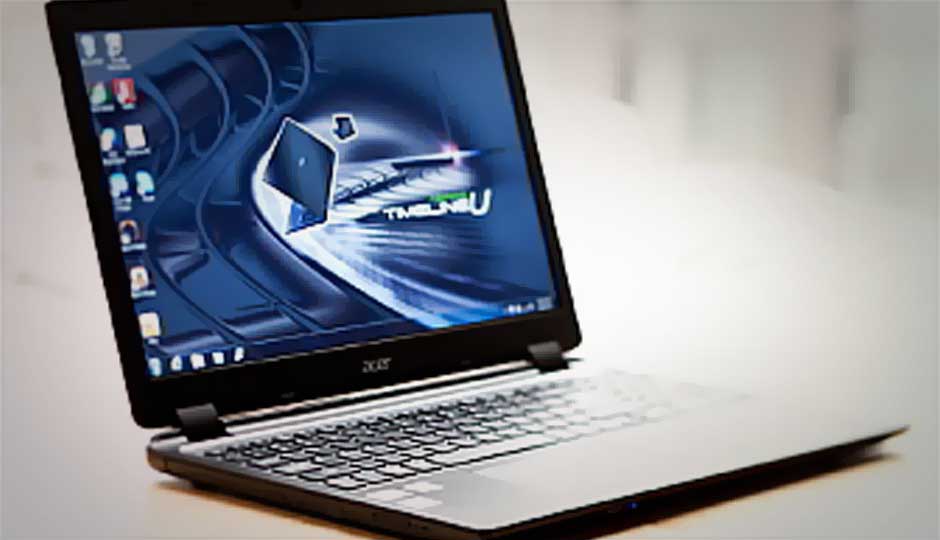 An optical drive. A 15.6-inch screen. A discrete graphics processor instead of integrated graphics. This is an ultrabook?

Nvidia volunteered the info that the GT 640M has 384 processing or CUDA cores running at 625MHz, and Acer says details on ship date and pricing for the M3-581TG are still a few weeks away, so our official review and rating must wait until then. But after spending a day with the 4.4-pound slimline, we're impressed.

First, the graphics. Nvidia says the DirectX 11-compatible GeForce GT 640M is not intended to topple gaming desktops or pump out sky-high frame rates on a big external monitor, but to deliver playable (30 or more frames per second) results with demanding game titles on an ultrabook's own LCD—in the Timeline Ultra's case, at the same ho-hum 1,366-by-768 resolution seen on smaller models.

Boosted by a 1.7-GHz Intel Core i7-2637M processor and 256GB solid-state drive (there will also be a hybrid hard drive version available), the M3-581TG aced our PCMark 7 overall performance test with a score of 3,468. And its battery life blew us away: Helped by Nvidia's Optimus technology, which switches from discrete back to integrated graphics when no visually demanding apps are active, the ultrabook's 55Wh battery lasted for 10 hours 2 minutes in our MobileMark 2007 rundown test.

We also liked the Acer's screen and keyboard, aside from wishing for higher resolution for the former. The display is adequately bright and sharp, and the keyboard (with numeric keypad and dedicated Home, End, PgUp, and PgDn keys) has a comfortable typing feel—more comfortable, to our fingers than the large, buttonless touchpad. Two more serious gripes are the placement of the USB ports—at the rear, much less convenient than the sides for popping in a flash drive—and the power button—on the ultrabook's front edge, where it's easily bumped by mistake. Intel's Wireless Display (WiDi) is not supported, either.

There's a broader question about how the market will receive the plus-sized successors to the initial crop of 13.3-inch ultrabooks; we've just seen one of the first 14-inch models in the HP Envy 14 Spectre, and now the 15.6-inch, DVD±RW-equipped Timeline Ultra comes to blur the distinction between ultrabooks and slim laptops like the Dell XPS 15z and Apple MacBook Pro 15-inch. It's tempting, but with its 256GB SSD, it won't be cheap.

There's also a question about how gameworthy Intel's late-spring or early-summer "Ivy Bridge" successor to today's "Sandy Bridge" processors and integrated graphics will be—while CPU speed is expected to be just a modest bump upward, the graphics improvement is rumored to be substantial, though it's doubtful it'll match the GeForce GT 640M.

Nevertheless, a system that shaves half a pound to a pound off the lightest conventional laptops while letting owners play the latest games, even at the expense of turning off eye candy like antialiasing, instead of just puttering around with Plants vs. Zombies and World of Warcraft? Yes, please. Watch this space for our full review of the M3-581TG and coverage of other ultra-ultrabooks.