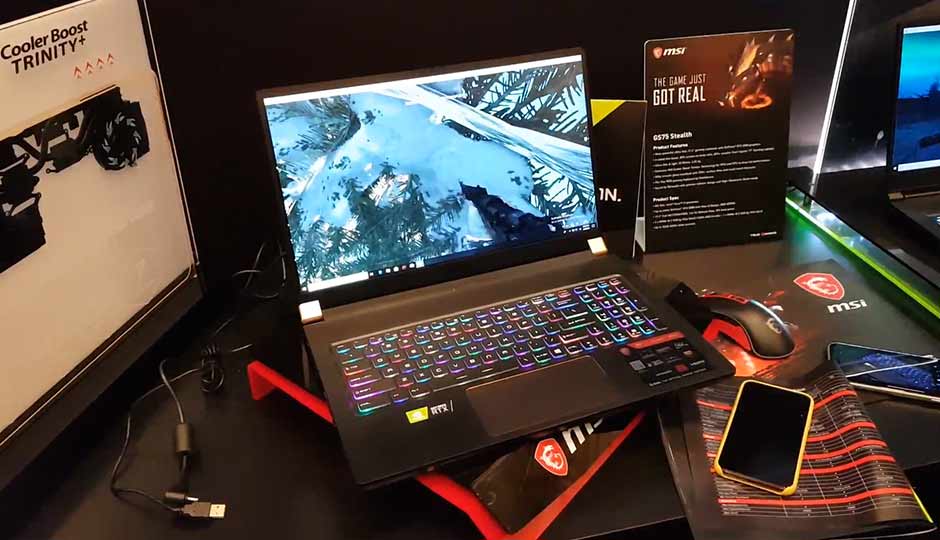 CES for MSI is generally focused more on the components side of the business, however, this year was a bit different as the gaming laptops took centre stage and the MSI GS75 STEALTH was the showstopper. Built along the same design philosophy as the MSI GS65, this new laptop takes things up a notch with the new NVIDIA GTX 2080 mobility GPU. Aside from the latest Turing-based GPU, another facet that stands out with the GS75 STEALTH is the massive 17-inch 144 Hz display. We had a few moments to play around with the GS75 STEALTH after the MSI press conference. Here’s what we thought about MSI’s latest and slimmest gaming laptop.

The MSI GS75 STEALTH borrows heavily from the design of the GS65. In fact, you wouldn’t be able to tell the two apart unless they were put right next to each other. The chassis is all aluminium with a matte black finish. This is paired with the bronze trim along the edges of the top side and the bronze accents at the hinges. Together these give the GS75 that all too familiar look which is signature to the series.

Speaking of the top side, the bezels are even thinner on all edges this time around giving the unit a much larger screen-to-body ratio of 85%. At its thinnest, the bezels are just 5.2mm wide. While thick bezels feel the same as thinner bezels after you get used to them, there’s no denying that the thinner and sleek design makes for a great first impression.

Coming to the sides, we see the same mish-mash of triangular and trapezoidal cutouts for the cooling vents. The MSI GS75 STEALTH has cooling vents on all three sides while the intake is from the bottom. Also, the bottom is where we see a snazzier looking arrangement for the intakes. The intake has a massive footprint as well, taking up about 30-40% of the entire bottom surface. We like the fact that there are rubber spacers around the intake to keep them elevated, thus ensuring plenty of airflow.

The overall finish looks good but is a serious fingerprint magnet. The good part is that you can only notices the blemishes under a powerful light. The unit is also surprisingly slim and because of the thinner bezels, the MSI GS75 STEALTH ends up being much smaller than other 17-inch laptops. In most gaming laptops, we see the display ending up slim and most of the bulk is moved to the lower body. In this case, the entire unit clocks in at 18.95 millimeters which is impressive. Especially considering that it houses a NVIDIA RTX 2080 Max-Q GPU which is more power-hungry than the previous gen Pascal GPUs and are rated for a higher TDP.

Not much has changed with the keyboard. We have the same keyboard as seen on the MSI GS65, except the GS75 STEALTH comes with a full keyboard including the numpad. The RGB mechanism is still powered by Steelseries Engine 3 and provides per-key RGB with the ability to customize them all. There are no macro keys, but you can assign macros with software as is the case with any other keyboard. Steelseries Engine 3 has the Gamesense feature which allows you to map ingame stats such as health, ammo, armour, etc onto the keyboard RGB pattern.

The trackpad, however, is massive. Compared to the GS65, it has a 35% larger surface area and has support for multi-touch gestures. The latter isn’t a new feature but the larger footprint certainly makes it easier to execute the gestures that require more fingers.

For obvious reasons we can’t comment about the performance of the laptop since we did not see any benchmarks being run nor did we run any ourselves. However, we do know that the hexa-core Intel Core i7 processors pack quite the punch. On top of that, the MSI GS75 STEAKTH comes with the  NVIDIA RTX 2080 Max-Q GPU which is much more powerful than the GTX 1070 present on the GS65. With RTX GPUs, there’s the added benefit of being able to run games which have ray-tracing features and support NVIDIA’s new DLSS feature.

Another key improvement is that you now get to have 3 NVMe SSDs in the GS75 STEALTH. We’d only seen this many slots in the Acer Predator 21 X and that thing costs $9000 or Rs.6,99,999 in India. So getting a feature set that’s usually reserved for the absolute high-end machine at a much more affordable segment is always a plus point. Not that the GS75 STEALTH isn’t a premium laptop, but compared to the GT-series, the GS-series is a step down.

Just like the GS65, the GS75 also comes with a 144 Hz IPS-level panel. That is to say that it isn’t actually an IPS panel but the colour reproduction is pretty much in the same league as most IPS panels. This is because of the MSI True Colour technology wherein MSI calibrates each laptop display to achieve near about 100% SRGB colour gamut. Moreover, you aren’t limited to just the one panel, you can hook up two additional displays to the HDMI and Thunderbolt ports. The additional panels will only run at 60 Hz.

All MSI GS75 STEALTH SKUs come with 82 Whr (4-cell batteries) which according to MSI’s internal benchmarks can provide over 8 hours of battery life. Usually, this coupled with the fact that it’s being powered by an RTX 2080 would mean that the power requirements are quite high. And that means you’ll have a bulky power adapter but that’s not the case here since MSI has opted to go with a slimmer adapter. Compared to the 230 W adapters that shipped with the previous gen laptops, these new ones are about 38% smaller. We started seeing these slim adapters introduced at COMPUTEX 2018 and it’s about time that OEMs started shipping laptops with these smaller power bricks.

The MSI GS75 STEALTH will not be coming to India anytime soon. We will be getting the upgraded GS65 within this quarter but the GS75 will be coming along much later. As for the pricing, we have not received any official word as of yet.