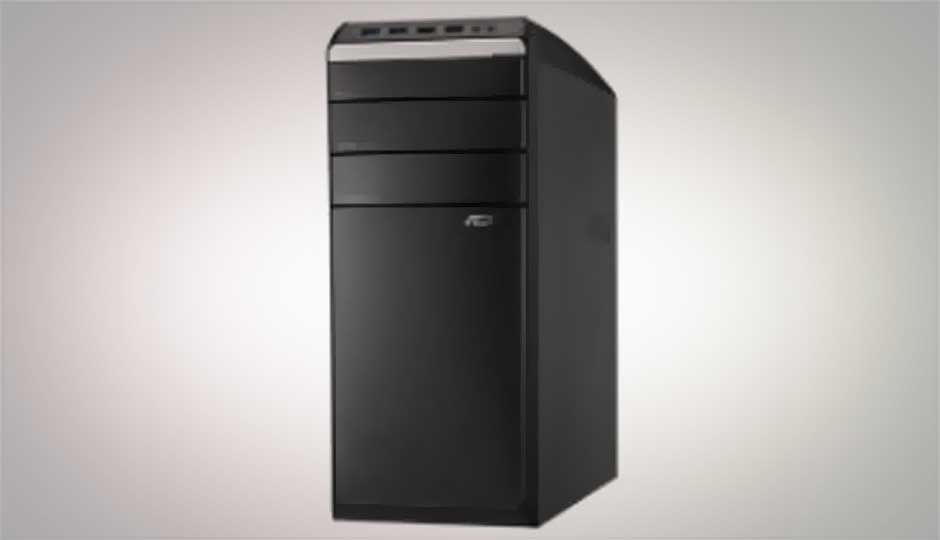 When it comes to desktops, there are varied demands about what a consumer wants with his system. Ideally, the market can be divided into pre-built desktops and assembled desktops. The ASUS M51-AC belongs to the pre-built desktop category, with the desktop coming completely built from ASUS along with its accessories and doesn’t require the user to have any knowledge about assembling the system in order to use it. The user only has to unbox the system, connect a few standard cables like power, display, input/output etc, and the system can be powered on and directly used. This is a win-win situation for consumers who don’t want the hassle of choosing individual parts and assembling their desktops as it makes it easy for them to just order a branded pre-built desktop and start using it.

The M51-AC from ASUS follows very well on the lines of an easy to deploy and use desktop. With so many options available in the market, a pre-built branded desktop must have something innovative that lets it stand out of the crowd so that it can compete with other brands and desktops. The M51-AC does exactly that by having some of the most innovative yet easy to use features. Regarding the specifications of this desktop, the M51-AC has the 4th generation Intel Core i5 4430 processor, 4GB DDR3 1600MHz RAM, 1TB HDD, Nvidia GT620 GPU, and Windows 8 with connectivity options in the form of a built-in Wi-Fi adapter included as well. When you speak of other connectivity options, the M51-AC has two USB 3.0 ports at the front along with two USB 2.0 ports and standard audio jacks all at the front of the case. Below the USB port, you’ll find a power button which has a stealthy design to it and it sort of complements the design of the desktop’s chassis. Coming to front panel of the desktop, you’ll find a card reader bay which is covered by a textured panel. You can connect and use all sorts of cards to the M51-AC such as Compact Flash, SD, MMC, MS/PRO. Below the card reader area there is the optical drive bay which has the DVD writer.

ASUS has included something below the optical drive bay area which has to be one of the most innovative features of the M51-AC that is a back-up power supply. Behind another front panel magnetic bay cover, ASUS has a bay which is specifically designed to house this back-up power supply or the ASUS Power pack. Basically, this power pack has a high capacity battery inside which works like a UPS in case of a power outage so that you can save your work before the system shuts down. Not only this power pack works like a mini-UPS, but it’s removable by just pushing a small button on the side of the bay which pops out this power pack. You can slide out the power pack and take it with you wherever you go as it also works like a mobile power bank and allows you to charge your mobile devices such as your smartphones or tablets.The power pack has the similar textured finish as seen on the front of M51-AC’s chassis. Rated at 14.6V or 19900mWh, this power pack is very good for charging devices and offers enough juice for multiple charges. Take a look at the device support list below to see how many times you can charge a particular device. If your phone or device is not in the list, don’t worry as the power pack comes with a standard micro USB cable so you can connect and charge most of the smartphones and tablets available in the market.

This optional feature of the M51-AC provides users the flexibility to attach external portable storage devices that support the USM standard to transfer content from the drive to the desktop or the desktop to the drive at higher speed. The USM SATA connector allows for a faster transfer rate than USB 3.0 provided the drive used is compatible with this standard.

We also took a peek inside the M51-AC and saw that ASUS has done a fine job at connecting the cables and arranging them in a proper way. Since the desktop is small, there isn’t much space inside to do a great job at cable management still, the M51-AC is decent in terms of that. These were some of the useful features of the ASUS M51-AC. If you may have missed out on our previous article on the M51-AC, you can take a look at it here. It also has the unboxing and first look video of the desktop. We’ll be looking at more features of this desktop along with its benchmark results and the pre-installed utilities from ASUS in the coming weeks. So watch this space for updates.