Here's everything ZOTAC unveiled on its 10th anniversary 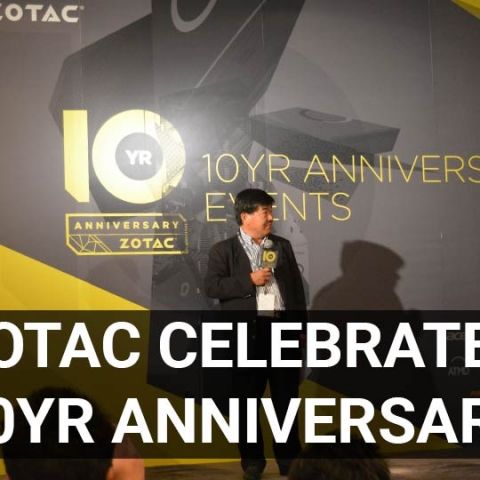 Tony Wong, CEO, ZOTAC International, said, “I would like to acknowledge our staff’s effort in making this happen – both this event and the past 10 years. Since putting the name ZOTAC onto the things we make, we have never stopped finding ways to make it even better. Our ultimate vision is to put ZOTAC into every piece of technology we use.”

A combination of one of the world’s highest performing GPU, efficient liquid cooling and a power phase designed to give stable power to enable high overclocks gives you this mean machine. We saw the GTX 1080 ArcticStorm in action at the demo session presented in a transparent chassis – the Thermaltake Core P5 ATX Wall Mount Panoramic Viewing LCS chassis. The graphics card certainly has the looks to kill as the entire unit has ZOTAC’s SPECTRA lighting adding a flair that most enthusiasts kill for. The thermaltake water block encompasses the entire card giving it a uniform look and ZOTAC has gone with a slightly different colour scheme this time, doing away with the yellow. 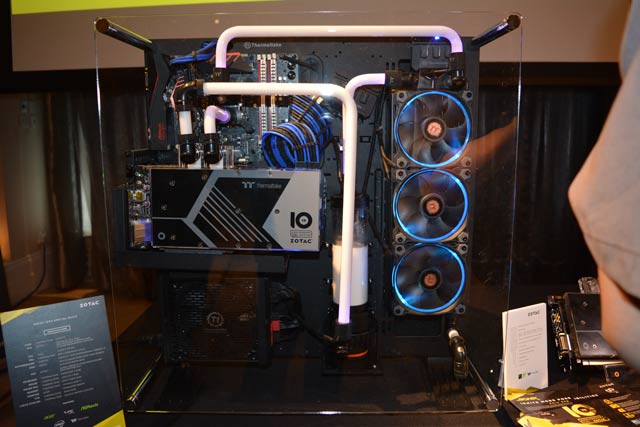 The GTX 1080 GPU at the heart of the graphics card is clocked at 1657 MHz which boosts up to 1797 MHz and we were told that it goes past 2 GHz with ease. As for the power circuitry, it uses a 16+2 power phases of which the +2 comes from the PCIe slot. The dual 8-pin PCIe power connectors handle the rest. With a power consumption of 180W you better have a good power supply to run this graphics card. And if you want to run 2 in SLI, well you better grab a high-efficiency SMPS that gives out at least 800W. Oh, you also have two BIOS on the card with a physical switch as well as the option of using FireStorm to do the same as well.

The waterblock makes use of G1/4 threads which are now procurable with ease in India, so gone are the days when water cooling used to be only for those with deep pockets. We don’t have Indian prices yet so you're going to have wait for that little piece of information.

And then there’s the MAGNUS EN1080 MiniPC. If you were to count the differences between the system in the previous image and this one, then the only differences are that the CPU on the full-tower is a little more powerful. But the MAGNUS EN1080 makes no compromises as it hosts a Intel Core i7 6700, a GTX 1080 GPU, supports 2x DDR4 RAM sticks clocked at 2133 MHz, has a PCIe x4 M.2 slot and 802.11ac Wi-Fi. And yes, liquid cooling with a dash of ZOTAC’s SPECTRA lighting technology. 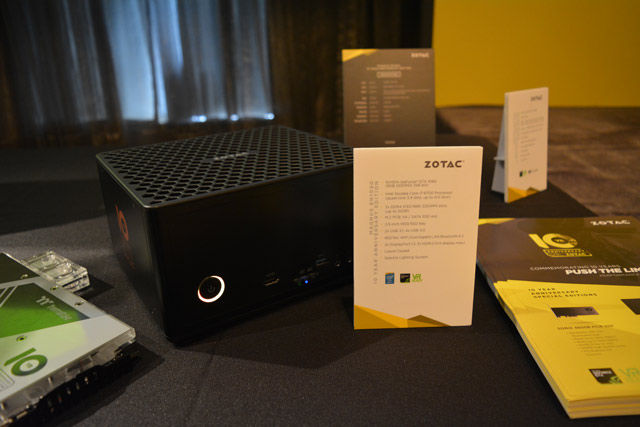 It seems there nothing mini about this mini-PC as it doesn’t even lose out on the I/O ports. The rear has 4 USB 3.0 ports, 2x DP, 2x HDMI, 2x Ethernet, 2x Wi-Fi antennae and to power the mighty GTX 1080, you need 2x power connectors as well. The SPECTRA lighting system can be seen in action on three sides of the MAGNUS EN1080 mini-PC.

We’ve tested ZOTAC’s Premium SSD which utilises a Phison based controller and MLC NAND but ZOTAC has PCIe based NVME SSDs as well. Their SONIX series are pretty powerful half-height SSDs boasting of 2800 MBps read speeds and 1300 MBps write speeds. 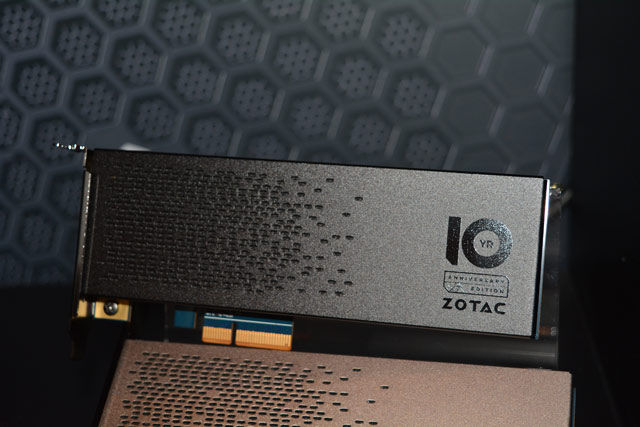 With the 10 Year Anniversary Edition SONIX SSD, they’ve pushed the boundaries even further with read speeds going up to 2800 MBps and write speeds of about 1500 MBps. Utilising the NVMe 1.2 protocol, this SONIX SSD boasts of speed as well as reliability which they’ve mentioned to be about 2 million hours before failure.

First unveiled at COMPUTEX earlier this year, the ZOTAC VR GO Backpack has since then undergone quite a few modifications since then. For starters, it now has a name – VR GO. Powered by an Intel Core i5 6400T, 8 GB RAM, GTX 1070, 120 GB M.2 SSD and a 1 TB HDD; the VR GO Backpack is more than capable of handling the VR titles coming out these days. 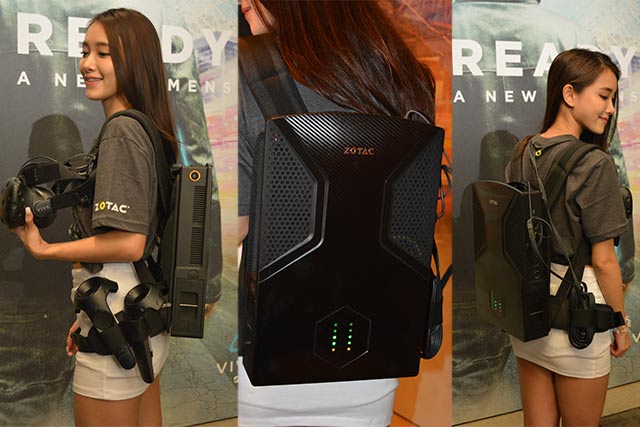 And since mobility is the key factor here, the backpack is now powered by two 9000 mAH batteries which can be hot-swapped. So you can run the system with just one battery while putting the other to charge. Speaking of which, if you do have the two batteries charged up then the VR GO Backpack will last you approximately two hours and it takes about the same amount of time to charge them back up.

The unit comes with straps which is quite handy for holstering your controllers when not in use and the also has the functionality to hold the cables. Since its first iteration, they’ve even moved the ports for the VR HMDs to the top making it a lot more convenient to hook up the device. And lastly, if you’re done with your little VR gaming session you can always plug in a DC power and use the unit as a full fledged mini-PC.

Available in 0-slot, 1-slot and 2-slot spacing, you now have the choice to complete the SPECTRA lighting setup with ZOTAC’s HB SLI bridge. 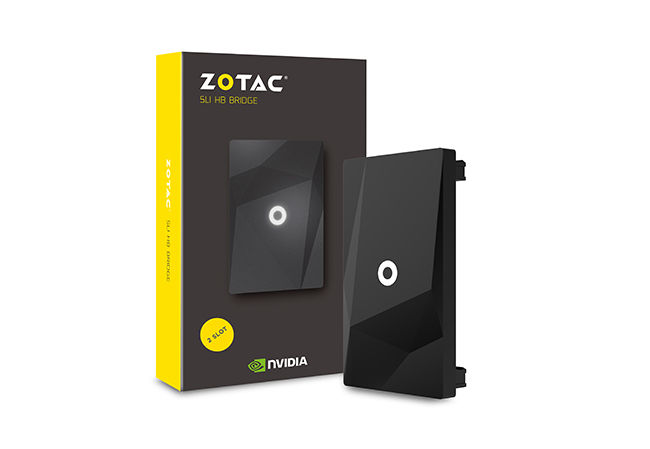 On the side, ZOTAC even had  an invitational CS:GO gaming tournament with teams from all over the world having flown in to participate. Splyce a US based team that remained undefeated throughout the competition took the crown in a best of three finals. The winners ended up winning ZOTAC merchandise and products from their GPU lineups. 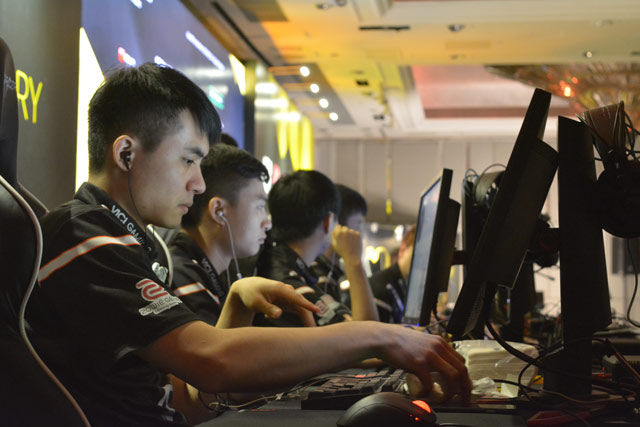