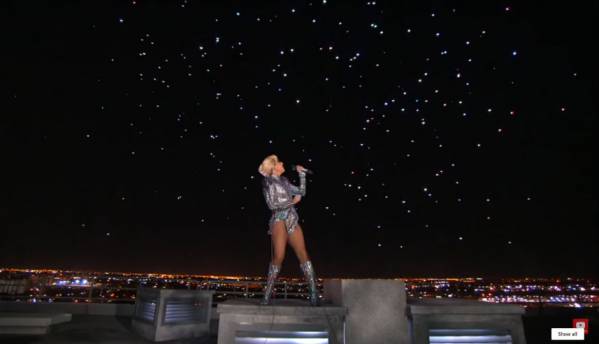 Intel’s got big investments in the Super Bowl this year. No, not financial investment, they’re technological. Particularly, let’s discuss the 300 drones powering Lady Gaga’s halftime show at the Super Bowl this year. The technology was driven by Intel’s Shooting Star drones, specifically designed to do what they did at the event. If you happen to have watched the show, those lights behind Gaga weren’t illusions, stars or anything else you can think of. They were drones.

Intel actually showcased this technology long ago. While the Super Bowl show used only 300 such drones, Intel had earlier put 500 of these in the sky, back in 2015. That, was a Guinness World Record for the Most Unmanned Aerial Vehicles Airborne Simultaneously. “All this drone can do is light up the sky, but this is something it can do really, really well,” says Daniel Gurdan, Light Show Engineering Lead at Intel, in the video the company presented in 2015.

Each Shooting Star drone is made of a soft and flexible plastic frame, with no screws, and weighs 280 grams. They have propeller cages, making them safer and also camouflaging them in the night sky. When they’re flying high, all you really see are the flickering lights fitted on the centre, as witnessed during Lady Gaga’s performance.

The Intel Shooting Star drones, though, aren’t “smart drones” per se. These are programmable drones, which have been told to act in a certain way. So, when they synchronise and align themselves to depict the American flag or Pepsi logo, there’s a team on the ground that has programmed them to do so. “The potential for these light show drones is endless and we hope this experience inspires other creatives, artists and innovators to really think about how they can incorporate drone technology in new ways that have yet to even be thought of,” says Josh Walden, senior vice president and general manager, New Technology Group, Intel.

The drones can fly for up to 20 minutes, and need special permission from the FAA to be flown. “This is the highest the Intel Shooting Star drones have flown,” Intel said in its press release. The company received a special waiver from the FAA to fly the fleet at up to 700 feet. In fact, the company received another special waiver to fly the drones in restrictive class B airspace. According to Wired, the government strictly forbids drones within 34.5 miles of Houston’s NRG Stadium.

The future of programmable drones

While the intelligence factor in smart drones makes them more useful, programmable drones can be used for specific use cases. Anil Nanduri, VP, New Technology Group at Intel, spoke of such drones handling search and rescue efforts with Wired. The quadcopters could also be used for specific relief operations, when airdrops are required for food and other supplies. Yes, the drones are capable of carrying payloads as well.

In other applications, drones like the Intel Shooting Star have very obvious applications in the entertainment industry. In fact, Intel had earlier teamed up with Disney for a synchronised light show. The drones are more environment friendly than fireworks, and reusable.

Of course, it’s going to be a while before companies really find mainstream applications. A lot of legal issues have to be worked out first. Many countries, including India, still do not allow drones to be flown in public, while Intel itself needed special special permission from the FAA for flying its Shooting Star drones in the US. Once that is all worked out, this may be the future of light and sound entertainment all over the world.

WhatsApp updates its terms and privacy policy and you may want to read the fine print
Intel announces a biometric authentication system for ATMs and more called RealSenseID
Apple's next-generation iMac is said to feature the largest display ever
Samsung unveils new range of TVs, monitor and soundbar at Unbox & Discover event
IT Rules 2021 and the need to regulate social media platforms: What it means for you
Advertisements