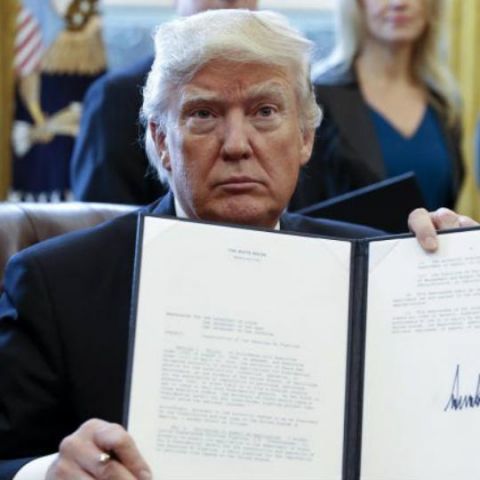 U.S. President Donald J Trump has been shaking the very principles of the United States’ constitution since he took his presidential oath. Trump’s tyrannical administration seems to be churning out executive orders without the slightest concern for real-world humanitarian, as well as economical implications, so much so that with this latest immigration ban from 7 Muslim dominant countries, he has struck the very backbone of the American economy - The Silicon Valley.

Trouble is brewing in the valley thanks to President Trump and his ban on Muslim immigrants from Iran, Iraq, Libya, Somalia, Sudan, Syria and Yemen.

As per a report from JPMorgan Chase, the Silicon Valley ranks Third globally in GDP per capita. According to the National Foundation for American Policy, more than half of all Silicon Valley startups valued over a billion dollars were founded by immigrants. The technology hub is also the region responsible for leading America’s economic recovery, as per Manhattan Institute for Policy Research. “Silicon Valley’s strength, which they have to keep building on, is that they attract so many people with advanced skills, advanced education, engineering skills at the PhD and doctoral level,” said report co-author Tom Gray. “They are very good at that. But if they start losing that, then they might have trouble.” And, Trouble is brewing in the valley thanks to President Trump and his ban on Muslim immigrants from Iran, Iraq, Libya, Somalia, Sudan, Syria and Yemen.

With tech companies like Apple, Google, Microsoft, Facebook, Netflix, etc relying heavily on high-skilled migrant engineers and professionals, a dark cloud seems to be looming over the valley, which has come out to condemn the executive order banning immigrants. Here’s how some of the world’s biggest tech giants reacted to the ban, as it came into effect on Friday.

Amongst the first tech companies to react to the ban, Google’s immigrant CEO, Sundar Pichai, told employees that the ban would affect at least 187 Googlers. The company advised its employees from other countries to cancel any travel plans in the near future. “We're concerned about the impact of this order and any proposals that could impose restrictions on Googlers and their families, or that could create barriers to bringing great talent to the US,” Google said in an official statement. The company also created a crisis fund for pro-immigration organisations. Accorning to an exclusive report by CNBC, Google created a "$2 million crisis fund that can be matched with up to $2 million in donations from employees, totaling $4 million, for four organizations: the American Civil Liberties Union, Immigrant Legal Resource Center, International Rescue Committee and UNHCR."

Steve Jobs was the son of a Syrian immigrant

Apple also has a lot to lose thanks to Trump’s immigration ban. The ban, which is a big slap on Apple’s face considering Steve Jobs was the son of a Syrian immigrant, instigated a company-wide response from CEO Tim Cook. In an internal company memo obtained by The Associated Press, Jobs told employees “It is not a policy we support.” "We have reached out to the White House to explain the negative effect on our coworkers and our company," he added. Cook also went on to say that "Apple would not exist without immigration, let alone thrive and innovate the way we do."

Netflix CEO, Reed Hastings, did not mince words in his reaction to Trump’s immigration ban. The CEO took to Facebook and said, "Trump's actions are hurting Netflix employees around the world, and are so un-American it pains us all." He went on to add, “These actions will make America less safe (through hatred and loss of allies) rather than more safe."

Elon Musk, an immigrant from South Africa and founder of Tesla, SpaceX tweeted saying, "many people negatively affected by this policy are strong supporters of the US" and they do not "deserve to be rejected."

Not allowing countries or refugees into America is not right, and we must stand with those who are affected - Airbnb

Local housing startup, Airbnb, decided to help immigrants who were stuck overseas due to the ban. The company offered to arrange for free-of-cost housing to those hit by the ban. CEO, Brian Chesky Tweeted on Sunday saying, “Airbnb is providing free housing to refugees and anyone not allowed in the US. Stayed tuned for more, contact me if urgent need for housing.” The company also released a statement saying, "Not allowing countries or refugees into America is not right, and we must stand with those who are affected, Airbnb is providing free housing to refugees and anyone else who needs it in the event they are denied the ability to board a US-bound flight and are not in your city/country of residence. We have 3 million homes, so we can definitely find people a place to stay."

The Redmond-based tech giant, Microsoft, reached out to its employees offering legal advice and assistance to those affected by the ban. Microsoft President, Chief Legal Officer, Brad Smith, said that the company was aware of 76 employees who are citizens of the banned countries, and hold a U.S. temporary work visa.

Uber has also announced a $3 million grant in legal defence funds for drivers affected by the Trump Ban. After a #Delete Uber campaign flaired out in New York city, CEO Travis Kalanick announced the grand and called the ban "unjust." “Today we need your help supporting drivers who may be impacted by the President's unjust immigration ban,” he added.