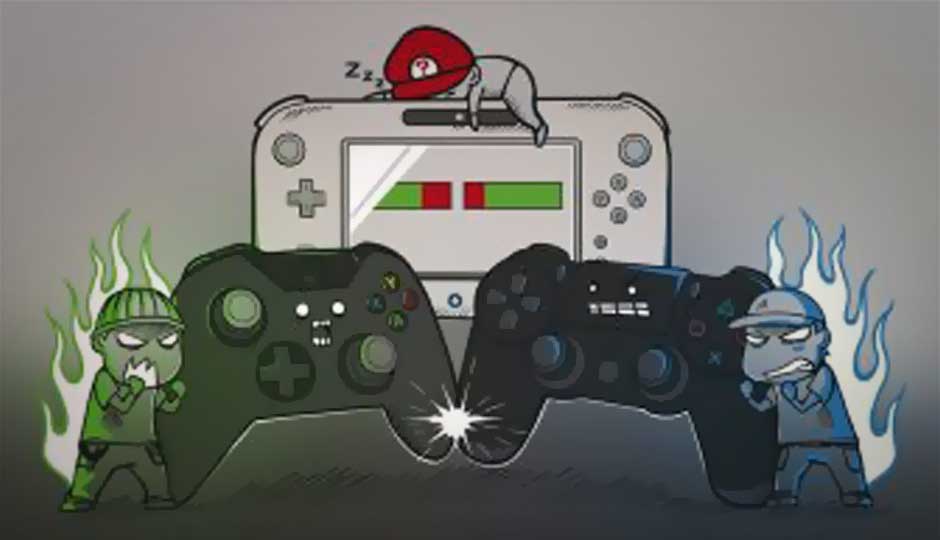 Xbox One vs PS4 at a glance

We compare the two next gens consoles on parameters such as hardware and launch titles to help you pick one.

Never before have both the console giants gone head to head in such a spectacular manner. It's time for Microsoft now to step into the ring with the Xbox One and face Sony's PS4 to earn bagging rights for which is the best next gen console. However, as we kick off the next generation, we see a very different kind of a contest. Our job here is to help you out in making that tough call in picking one of the two contenders.

The comparison chart below provides a quick glance at which console is going to come out on top by comparing their hardware spec and a few other features. Both consoles are pretty identical when it comes to hardware, with an x86 AMD APU, making both consoles essentially PC's.

On paper it seems there is not much to differentiate between the two. Both the next gens have an AMD APU with an 8 core Jaguar CPU, both have pretty much identical CPU's, but a slightly higher clock speed gives the Xbox One an edge here clocked at 1.75Ghz compared to Sony's 1.6Ghz. Despite, the Xbox One CPU being slightly faster, it is rather unlikely that it will make a notable impact on either console's relative game performance. 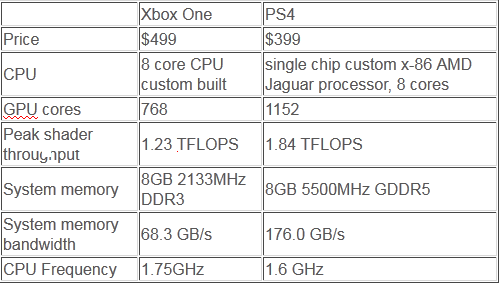 However, when it comes to the GPU unit, both use similar AMD Radeon graphic units, but Sony's GPU unit has 1152 shaders (18 compute units) compared to Microsoft's 768 ( 12 compute units). In short, we can say that the GPU on the PS4 is more powerful than the Xbox One (keeping everything , which gives Sony a big leverage.

Beyond clock speeds and core counts, both GPU's are very similar, both based on Graphics Core Next (GCN) archictecture, and thus support for OpenGL 4.3, OpenCL 1.2 and Direct3d 11.2.

Once we are through comparing the CPU/GPU units on both consoles, the difference in hardware specs on both consoles is clearly evident, with RAM being the most significant difference. While both of them have 8GB of RAM, the PS4 has a 5500MHz GDDR5 RAM(similar to one you'd find on a modern graphics card), and the Xbox One uses 2133MHz DDR3 RAM(the same RAM in your PC). This gives the PS4 a massive bandwidth advantage, almost more than double the bandwidth Xbox One will have.

So, the PS4 on paper clearly beats the Xbox One when it comes to potential performance. Thus we would expect games on the PS4, with its much beefier GPU unit, to be smoother and more visually exciting.  There are lot of games where the PS4 outputs at 1600x900, while the Xbox One at 1280x720. Thus, giving PS4 the edge when it comes to raw graphics prowess, and eventually higher output resolution and smoother frame rates.

Check out the video below which shows a preview of PS4 and Xbox One versions of Battlefield 4. For most accurate representation, make sure you watch it on 1080p resolution.

We can expect cross platform games to look virtually identical across the two consoles, however the difference will be clearly visible in tangible terms on Sony's exclusive titles, where the difference in hardware capabilities will be evident. PS4 exclusives will make full use of its superior hardware, the likes of masterpieces produced by Naughty Dog should look theoretically better than anything compared to the Xbox One. Then again, although the PS3 had better hardware than the Xbox 360 (on paper), many games looked better on the latter.

As we kick off the eighth console generation, we see a very different kind of a contest. The hardware on both the next gens is essentially the same. On paper both the consoles don't look so different, so what is it that's going to be the stand out feature?

Gamers would rather want to know what's in store for the next six months from now.  Microsoft is able to offer a strong number of games available online, it also appears the Redmond giant has managed to get a stronger looking line up that will be able to stimulate more consumer and media interest. For Sony,  the talking point right now is Resogun, as their launch window got a severe blow with the delay of Driveclub and Infamous: Second Son. If we ignore the the third party titles for both consoles, there are only a few exclusives available right now for the PS4, though Xbox One has a titles that are stellar and at the same time offer a greater variety for its audience.

The pie chart  above, from EXPLOSIVEALAN, compares the exclusive titles per console . This handy pie chart clearly shows that the the Xbox One has a much more variety of game genres and more exclusives.

Well, both consoles also have their focus on different things. If we are talking about pure value, the PS4 seems to be a clear winner at only $400, however you will be missing out on the full features of the PS camera or the remote play of the Vita at that price. For the Xbox One you'll have to shell out $100 bucks extra, as the Xbox One comes bundled with with a Kinect sensor, but that extra cost will be worth every penny as  Microsoft offers a total entertainment package that fully integrates new features like SmartGlass and voice commands through Kinect. As a matter of fact, the console's announcement was to offer total television and media consumption, Xbox One simply has more content channels available (for the time being, only for American users)

In addition to its own video platform,  Xbox One will feature apps for ESPN, Fox Now, Machinima, The CW, TED, the NFL and will eventually have access to HBO Go. There's no denying the fact that content can be purchased via the PSN Store, but Microsoft just seems to offer a richer, more deeply integrated media experience. If it weren't for the Xbox One's live TV integration, the two platforms' media offerings would be pretty even. The Xbox One also allows you to control your cable box from its dashboard.

PS4's exclusive titles will be coming in 2014, while the Xbox One's launch library feels superior. Both console manufacturers have strong support from third party developers like Ubisoft, EA and Activision so there's a plethora of titles that will be available on both. At launch it seems the Xbox One is geared to have more than twice as many exclusive retail games, including Dead Rising 3, Forza Motorsport 5 (both titles have received great reviews, sitting over 80 at Metacritic) and Ryse: Son of Rome, the title that impressed everyone at Gamescom.

So, now its up to you to pick a side.