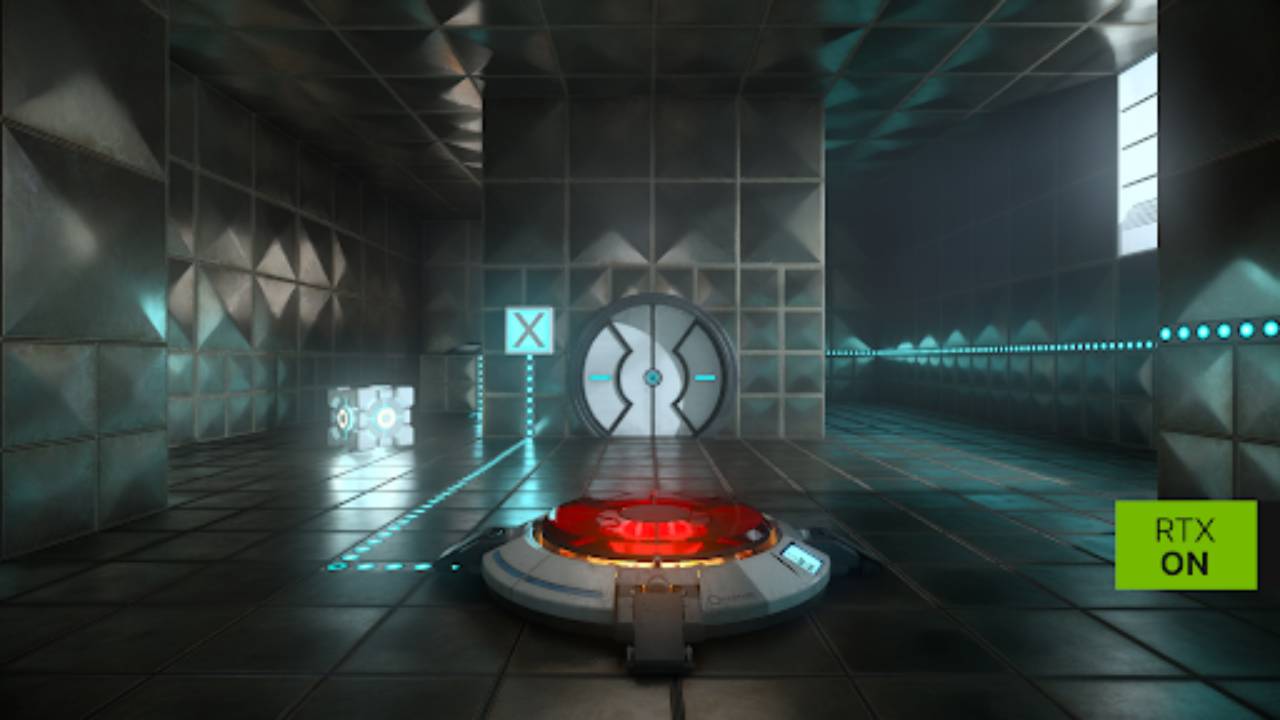 We take a deeper look at Portal with RTX and how it stands up in this day and age.

Anyone who has been playing video games for quite a while now must have come across the word ‘Portal’ on numerous occasions. The game was first released in 2007 (yes, it is pretty ancient) and took the world by surprise because of its fun and innovative gameplay, challenging puzzles that can make you scratch your head in frustration, and an interesting yet dark story to boot. So when we were given the opportunity to experience Portal all over again, but this time with RTX, we jumped on the opportunity right away. So let's get into the nitty-gritty of the game real quick.

When it comes to the story of the game, it is just the same. There are no changes to the story or dialogue whatsoever when compared to its 2007 counterpart. You still don’t have any idea who (or what) you are, why are you locked in a glass room in a super hi-fi facility, why is a robot voice asking you to do tests, why you have a gun that can shoot portals, and WHY IS THE CAKE A LIE?!

The story plays out exactly as it did in the 2007 version, and is told to you via the robotic voice we mentioned earlier that asks you to go from one room to another finishing “tests” and trying not to die, with a promise of tasty cake at the end. Without spoiling anything else, the story is just as good, with a handful of plot twists sprinkled throughout the game. Oh, and the story also has some moments here and there that warrant a chuckle or two, because of clever writing and a lenient use of dark humour that might make you stop playing for a while and think about what was just said. 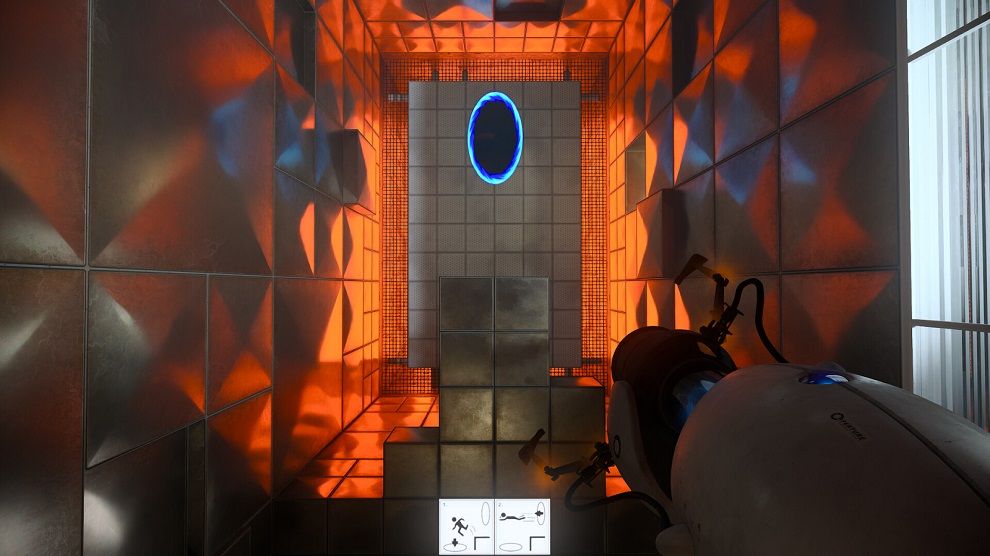 Much like the story, there are absolutely no changes on the gameplay front as well. You still have to finish a level, casually dubbed as “tests”, in order to get to the next test, and you still have a gun that can shoot two portals at the same time. The portal gun, which will be with us during the entirety of the game will be our main method of passing through the levels. The levels are varied and will make you scratch your head on more than one occasion, and when you get that “AHA! Moment” and figure out the solution, the satisfaction is immense.

The gameplay is very simplistic. You use your portal gun to make a portal in one place and shoot it again to make a separate portal in another place, and that is about it. You have to use these portals to manipulate the environment and complete the tests. The portals are linked to the left and right buttons on the mouse, making it easier to navigate when you are inches away from death (which is always). You will be dying a lot, but that is because of the trial-and-error nature of the game, and the satisfaction when you complete the level in a single go is immense. The gameplay is exactly the same this time around as well, and why fix something if it isn’t broken in the first place?

The sound design in the game is more or less the same as its 2007 counterpart, it's minimalistic, crisp, and to the point, and the music is pretty much non-existent until you reach the later stages of the game. Since the game is mostly set in a hi-tech facility, the sound design is pretty solid. From the mechanical whirring of the massive hinges to the sound the portals make, to the buzzing of electrical appliances, the sound design is very immersive and actually helps with the gameplay, especially in sections where you have to use auditory cues in order to finish an objective.

As we mentioned earlier, the music is pretty nonexistent until the later stages of the game, but when it does kick in, it gives us a sense of urgency and an overpowering feeling of dread. It is very techno-Esque with some dubstep thrown into the mix and adds to the sense of urgency and survival in the later stages. Oh, and not to mention, the music that plays during the final “boss fight”? *chef’s kiss*. We do not have any issues with the lack of music because the sound design is so good and when the music does kick in, it is actually good. 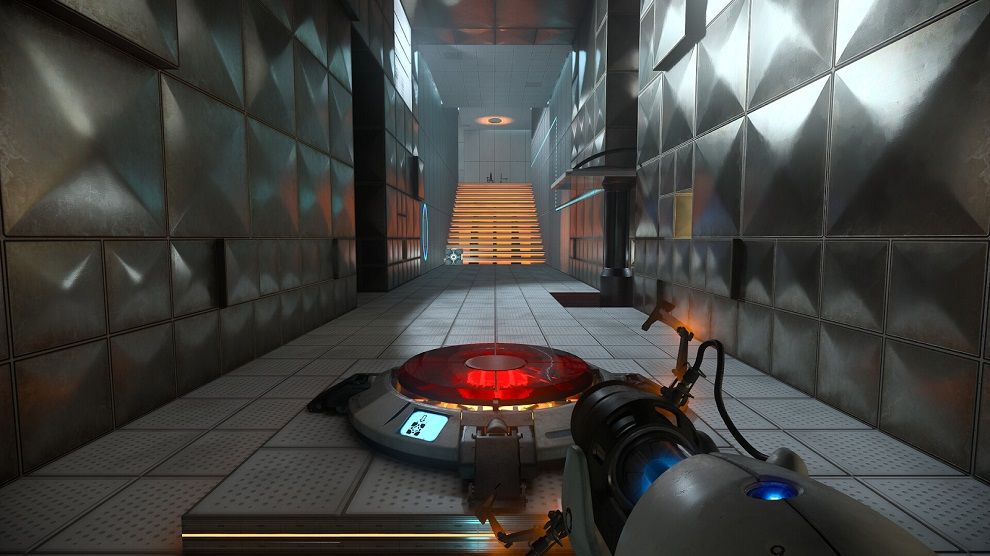 The graphics have seen the most drastic change this time around when compared to the 2007 version. Since the name of the game is ‘Portal With RTX’, we see the RTX in action and oh boy is it stunning. If the 2007 version of the game looked good, the RTX version looks FAR better. With proper ray-traced surfaces, textures, and details, the game is a sight to behold and is quite possibly the best-looking version of Portal ever (we’re not including graphic enhancement mods).

The game looks and plays great, and with the number of things that are present on the screen at a single moment, the graphics and the performance hold up really well, without any hiccups. The surfaces of the facility look polished and sophisticated, the cranks and bolts of the portal gun are extremely detailed, the portal effects are amazing, and the particle effects are great all across the board.

BUT (there is always a but), it is not to say that the game doesn’t have certain issues. Playing a graphic-heavy game like this one comes with quite a few performance issues that can sometimes break the immersion and make a bad impression. We played the game on an MSI Crosshair 15 gaming laptop, with an 8GB RTX 3070, 12th Generation Intel i7 Processor, and 16GB RAM, and we found some minor hiccups here and there.

We played the game on the highest possible settings, with almost everything maxed out, and the framerate was pretty stable overall, leading to a smooth gameplay experience. But that wasn’t always the case because there were instances when the framerate would take a minor hit and just dip down, but these instances were rare, and only happened when there was a lot of stuff on the screen at one time. Another aspect where the visuals lacked a little was in the shadows department. The shadows were fine overall, but there were moments when the shadow of the player character just looked weird and out-of-place, even when the character was standing right in front of a light source and warranted a crisp and clear shadow. There was also an instance when the character was standing in front of a bright light source, but in the shadow, one of the legs was missing. It wasn’t that big of a deal, and it gave us quite the chuckle.

But we’re just nitpicking here, the graphics here look amazing and the game has never looked better without the use of mods.

Portal RTX is essentially the same old game with a shiny new coat of paint, which looks extremely beautiful and plays exactly like its 2007 counterpart. There are no new changes to the gameplay or story, with the only improvements being in the graphics department, and we are extremely content with that, because why fix something if it is not broken in the first place (we said this before, we know). A few graphical and gameplay issues aside, the game is just as good, if not better, and it looks damn gorgeous, no matter how you look at it. So if you are a veteran of the Portal series or a new player who wants to experience a beloved relic from the past, this game is definitely a must-play.

Here are the best unlimited plans under Rs 200 by Airtel, Vi and Jio Previous Post
Should AI tools be regulated by the government? Nvidia’s Huang says yes Next Post