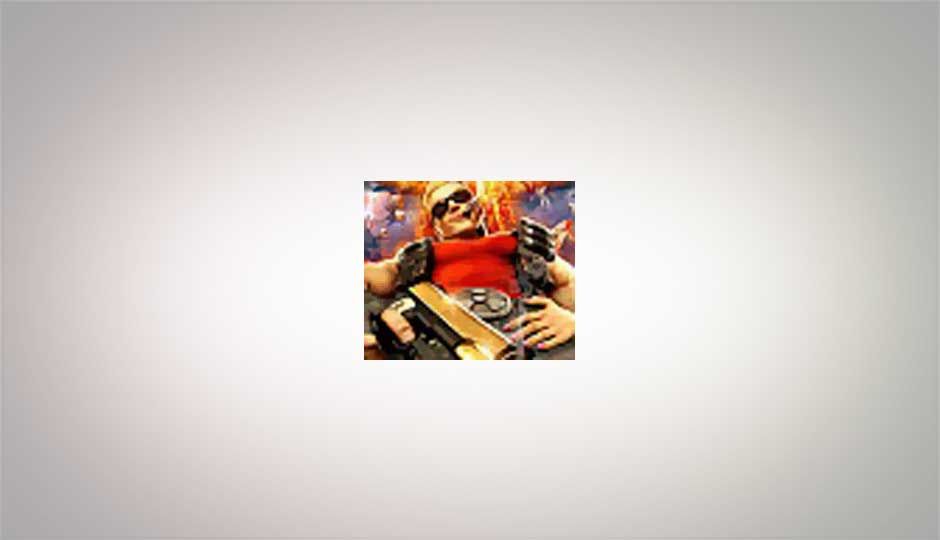 Matthew Murray   Feb 27, 2011
Two years ago, if we had said in public that we had actually played Duke Nukem Forever, we probably would have been hit with furious eye-rolling, gales of corrosive laughter, a punch in the face—or most likely all three. An ongoing joke in the gaming industry for over a decade now, the game was announced in 1997 and has been subjected to one of the most painful and prolonged development cycles of any piece of entertainment anywhere, ever. (It's taken first place five times in Wired's annual Vaporware Awards, and even earned a coveted Lifetime Achievement honor.)

But now two things have happened that, even as late as last year, we would never have expected: Duke Nukem Forever has been granted a release date of May 3, and... we've actually played it.

Keep your guffaws and fists holstered, please—we're serious. The game's developer, Gearbox Software, and publisher, 2K Games, are on a road trip to introduce members of the media to the real Duke Nukem Forever, and a couple of colleagues and I got our first look at it yesterday.

At first glance, it doesn't look much different from most other first-person shooters on the market. The graphics are crisp and impressive by today's standards (we played on an Xbox 360, but the game will also be released on the PlayStation 3 and PC platforms), a melding of hard-core grit and off-center-smirk cartoonishness. There are lots of big guns firing big bullets and creating big explosions, mutated aliens (these look like anthropomorphized boars), and Las Vegas laid waste in a way even the one-two punch of the CES and AVN conventions in January can't manage.

But it's its attitude rather than its atmosphere that sets Duke Nukem Forever apart from, well, every other game (except its, ahem, immediate predecessor, Duke Nukem 3D). Duke is far from your typical action hero and makes sure you know it every time he spews a withering taunt at an enemy he's gunning down (some of which we recognized from movies like Predator and Army of Darkness), or when he admires himself in a mirror.

His world, too, is one of considerable color and interactivity—we loved seeing the Duke museum full of digital highlights going all the way back to his original 1991 2D platformer, and we could manipulate lots of surprising objects, including a number... uh... found in the bathroom of the hotel where the game begins. (We're going to refrain from commenting further at this point.) At one point Duke even got shrunk and had to drive around his hotel resort in an RC car—something you don't see in every game, but felt right at home here. We didn't get a chance to see what happens when Duke finally arrives at the Hoover Dam, but we can imagine.

We couldn't determine too much of the story from just our brief play session, but according to Gearbox President Randy Pitchford, it survives from the original 1997 Duke Nukem Forever treatment—and is about the only thing left in the game that does. After saving the world last time around, Duke has retired from alien fighting and is living the quiet beer-and-babe-filled life he's always wanted—until the aliens show up again, forcing him into action one more time.

Equal parts adult and adolescent, action and comedy, and satire and gross-out, Duke Nukem Forever looks to contain a little bit of everything—which isn't that shocking given how long it's been in the works, come to think of it. Will it all coalesce into a single unified game? And, most importantly, will it end up being worth the 14 years the world has been waiting for it? We're not sure, but we're looking forward to finding out on May 3.

Click next to run through some very interesting screenshots of the game... 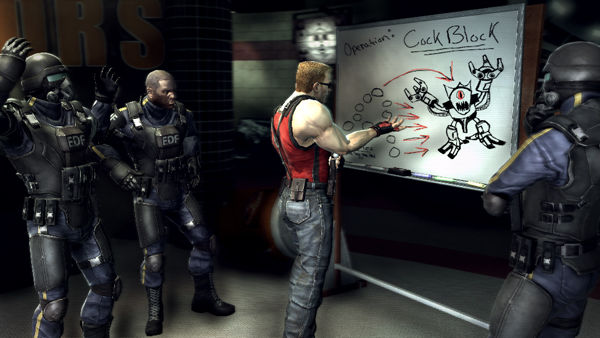 Duke Nukem Forever: Hands On - Strategic Planning Is Duke Nukem rusty after 12 years? It doesn't look like it—he's still ready to go with his unique (and uniquely dangerous) battle plans at a moment's notice. Don't like this one? Erase the board and create your own. 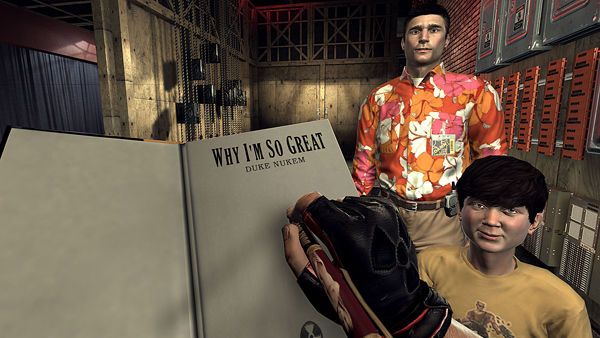 Duke Nukem Forever: Hands On - Autographing Duke signs for one of his myriad admirers. 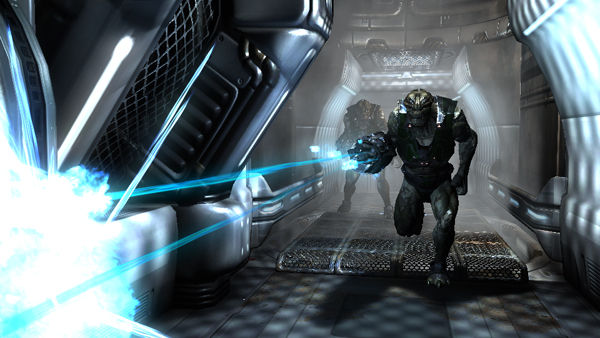 Duke Nukem Forever: Hands On - Hallway When the aliens come, Duke will be ready for them. 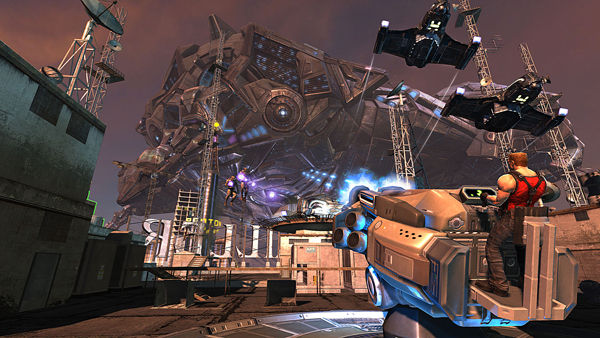 Duke Nukem Forever: Hands On - Turret Duke has a wide variety of weapons and vehicles at his disposal—it looks like he'll need them, too. 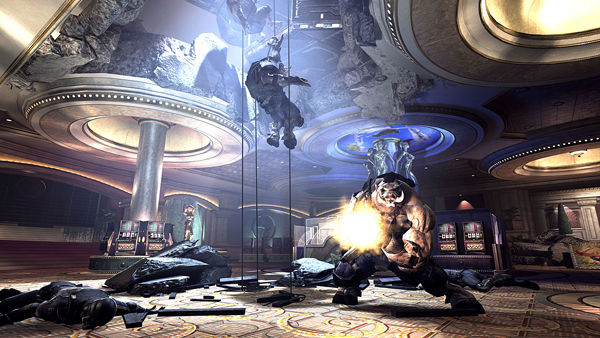 Duke Nukem Forever: Hands On - Invasion When Duke's swank Las Vegas hotel is invaded, there's only one thing to do: make some bacon. 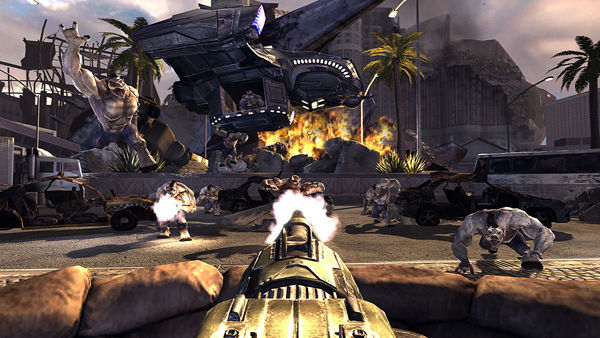 Duke Nukem Forever: Hands On - Big Gun Duke knows where to find all the choicest weaponry, and he'll need it if he's going to save Las Vegas and the world. 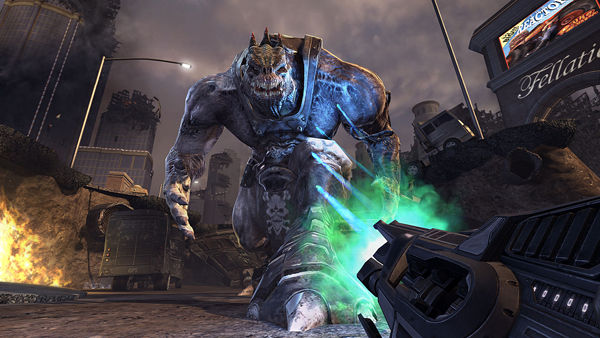 Duke Nukem Forever: Hands On - Boss Battle Can even this fearsome boss take down Duke's colossal ego? We're guessing... no.