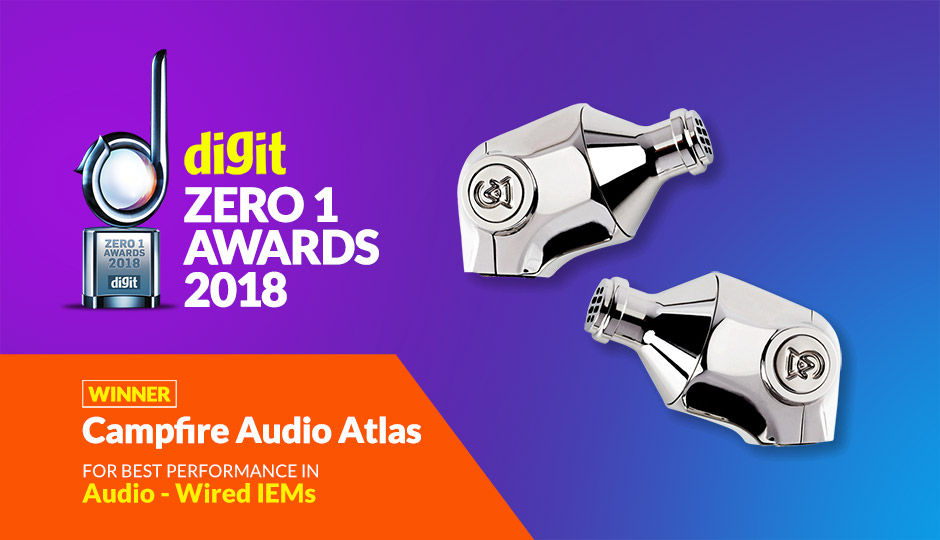 The last year in audio has been more about going wireless than anything else. We have a brand new ‘True Wireless’ category in this year’s Zero1 for those looking to ditch wires in all forms when it comes to IEMs. However, there’s a certain allure with wired earphones that is hard to ignore. In a direct comparison, it is hard to deny the edge that wired IEMs hold over their wireless counterparts.

Established brand names and newer players, have all been focussed on tweaking their technology to help you find the just right signature for your preference. Some are bringing more than a couple of drivers in a compact form factor at an affordable price, whereas others try to bring technologies usually reserved for over-ear headphones. Let’s jump straight into the best wired IEMs of 2018.

Campfire Audio is not a new name to the world of quality, boutique audio devices. So when the Atlas made its way into our test labs for this year’s Zero1 awards, we were excited. Sporting signature CA technology like the ADLC diaphragm, the Atlas hosts a pair of 10mm dynamic drivers. These drivers are packed inside a stainless steel enclosure that looks like something right out of a cyberpunk movie. With Beryllium / Copper MMCX connections on the Silver Litz cable, Campfire Audio quite evidently avoids all shortcuts to success with the Atlas.

The sound of the Campfire Audio Atlas is beyond anything we’ve experienced so far with wired IEMs. There’s a certain fullness to the overall sound that makes every type of music come alive. The driving force of the Atlas is its bass, with just the right amount of punch that eases you into the lows without sounding harsh. The mids on it are a thing of beauty, driving tracks like Adele’s Hello with a powerful finesse that just puts it a league ahead of its competition.

If we were to forcefully pry apart some minor chinks in the Atlas’ stainless steel armour of audio, it would be in the highs where there’s a tad bit too much brightness, but it still handles tracks with significant high-end density better than most other wired IEMs we’ve heard. The detailing and soundstaging on the Atlas is also par excellence, with tried and tested tracks like Hotel California revealing new musical information at its behest, and Bjork’s vocals on Hunter flowing smoothly through a precise cornucopia of instruments. The Atlas bags this year’s victory.

With the entrance of Audeze in the portable IEM market, we expected the iSine 10 and 20 lineups to continue. However, Audeze decided to release a flagship IEM, the LCDi4, that features some technology that goes into the full-sized LCD4. This does give the i4 a higher level of performance than last year’s iSine, but it falls short of the Atlas on a couple of counts.

First, it is quite a chore to wear these units. Featuring a wider than usual trunk, which causes discomfort after a short period of usage. Additionally, due to the elongated trunk, the driver units stick out at a distance from your ear, with nearly no isolation. In the audio department, the LCDi4 is quite close to what we would call a neutral signature.

However, the sound was a little too laid back, lacking the oomph necessary on several tracks. A lot of people might actually prefer this over the Atlas if they’re sticklers for a flat sound and being able to configure their own signature, with the help of external DSPs and EQs. However, for us, that requirement acts against the i4’s case.

Coming in behind the Winner and the Runner-up, the FiiO FH5 definitely takes the cake in terms of pricing. Sporting a quad driver configuration with a 10mm dynamic driver for the lows, a single larger mid-range BA for the mids and a dual driver for the lower and upper treble, the FH5’s proficiency in audio shows through in its capable performance across the spectrum.

At its price point, the build quality, options in tips and the connectors available are at par with some of the uber expensive IEMs that have made it into our hands. Definitely a good choice for entering the world of high-end audio with IEMs.