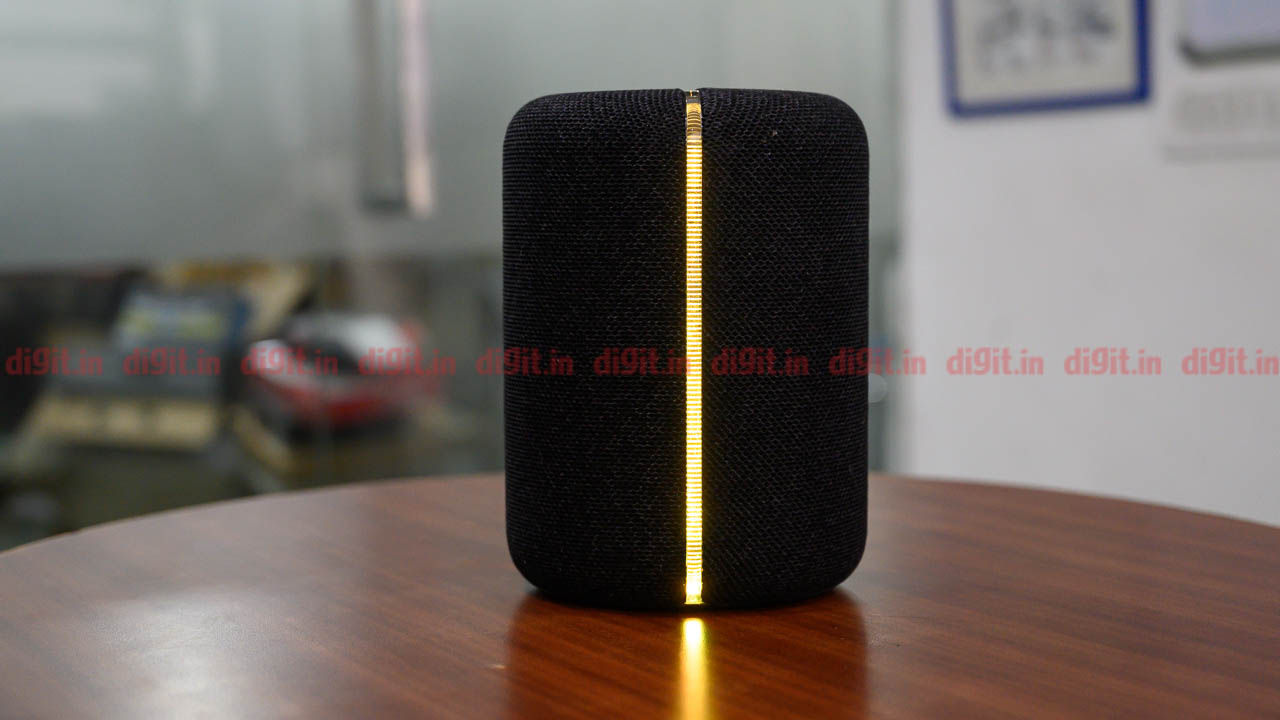 The Sony SRS-XB402M can clearly be described as a bass machine. With a name that literally spells out Xtra Bass, you can be rest assured that this Bluetooth speaker does the job and does it well. We tested out the black variant of the SRS-XB402M which incidentally is IP67 rated. This means that the speaker is pretty much water and dust proof. It can be immersed in about 2 to 3 meters of water without any real issues (although, we didn’t really take the risk). There are three LED strips that run along the side of the speaker. These three strips also light up in different modes such as chill and hot, giving you a variety of different light patterns. Ideally, these lights would add to an event like a party but as far as daily use is concerned, these LED lights can be quite distracting. 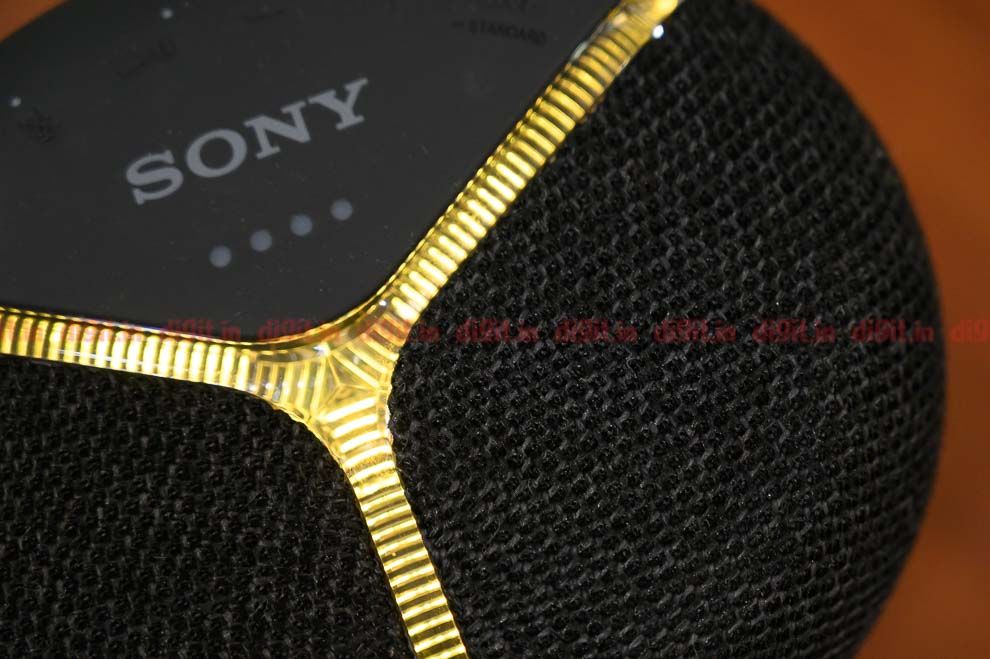 The back panel has a perforated surface and a small groove that makes holding the speaker a little easier. Since it is built as a cylindrical oval, transporting the speaker around the house can be a bit of an issue as it is not easy to grip. The power outlet is in the back and is covered by a water-proof rubber cover. All the controls of the speaker are on the top of the device. Ideally, if you’re standing, you’ll see the controls clearly but if you happen to be at eye level with the speaker, you’ll have trouble seeing which buttons you’re pressing. 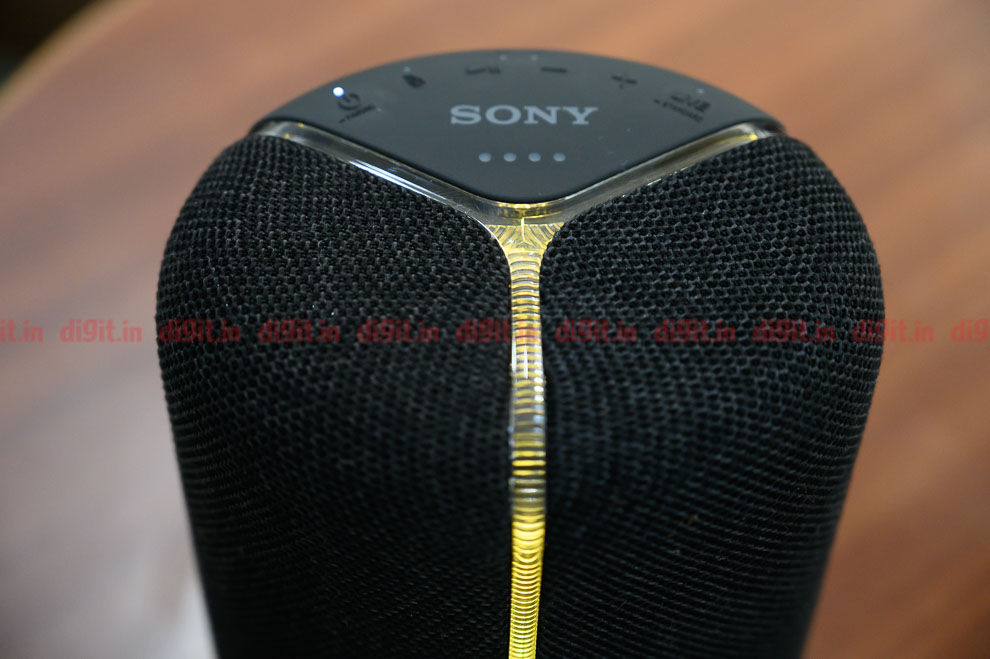 We tested the speaker out in four rooms with a variety of different genres of music such as heavy metal, modern R ‘n’ B, Synthwave, EDM, Indie rock as well as a bit of acid jazz. When we played Bleed by Meshuggah, the speakers showed off its bass enhancing capabilities as the song had an added crunch to the low end. But, at higher levels it becomes a little difficult to discern the individual instruments. It could also just be that the genre of music did not suit the speakers’ output. Next up, we played Bad News by Leon Bridges. The song is a modern R’n’B tune that incorporated a lot of old school in its sound. This is where the Sony SRS-XB402M really shines. The highs and mids are bright and clear sound while the Xtra bass really helped push the percussive sounds. Next up we tried a proper dance/club tune, LMAFO’s Party Rockin, and this was where these speakers truly shine. The LIVE feature on the speaker also comes into play here as it enhances the audio and gives it a ‘surround’ ambiance.

We also played I’d Rather Dance with You by The Kings of Convenience and these speakers compliment the song perfectly. At medium volume, the song was clear, and all the instruments were audible. We turned on the LIVE feature and it added a ton of life to the tune. The sound was fuller and had more heft to it. Next, we played A Whole Lotta Love by Goldbug, who are an acid jazz band. The sound on this tune was a little more clustered as the instruments blended with each other creating a bit of a muddy mess. But again, this could be because the music may not suit the kind of sound the speaker emits. 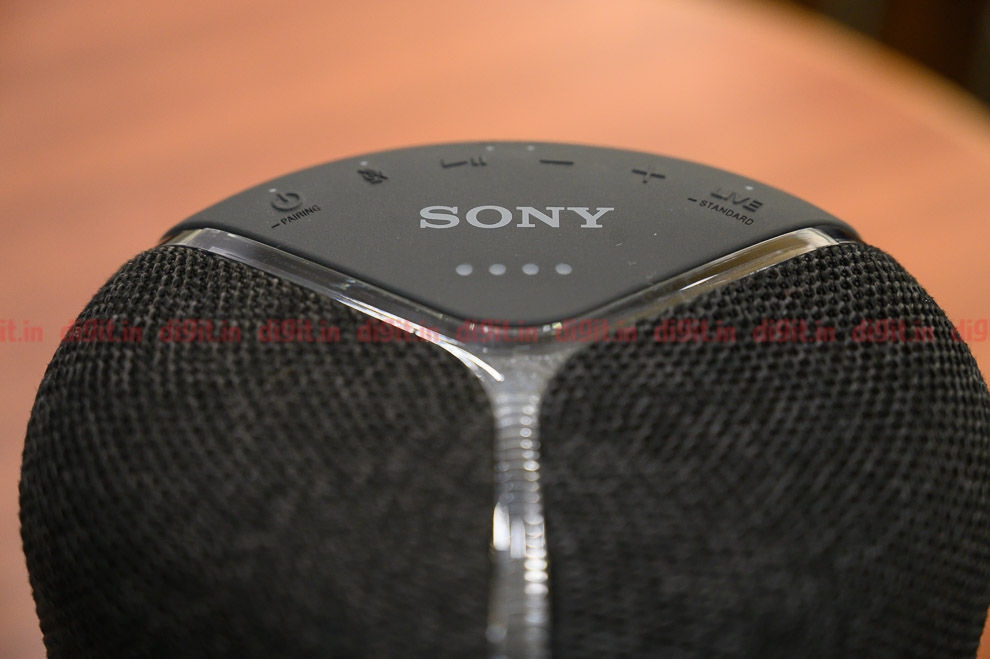 The speakers were tested in a bathroom (of course), a master bedroom, a smaller empty room and a large living room. The bathroom was tiled, with a low ceiling which boosted the sound and gave it a tinny feel. The master bedroom also had large windows which were covered by thick curtains. We’re sure that the curtains influenced the sound as thick surfaces generally bounce the sound back to your ears. The sound in the master bedroom was adequate as we did not crank the volume up there. The songs we played and even the podcasts we listened to were clear and after a while you tend to forget that the speaker is in the room as it feels so natural.

In the smaller empty room, the speaker sounded big and full. This could be because of the empty room as the walls allowed the sound to bounce off to create an ‘echo’ effect that dampens the experience. But again, this was just a test and you will probably not be using this speaker in an empty room. The best sound that we experienced was in a large living room with furniture. The music flowed freely and the mids and highs were well represented. Of course, the bass is where it's at and the best experience we had was in a large living room. Even at a distance of 15 to 18 feet, the sound was clear and precise. 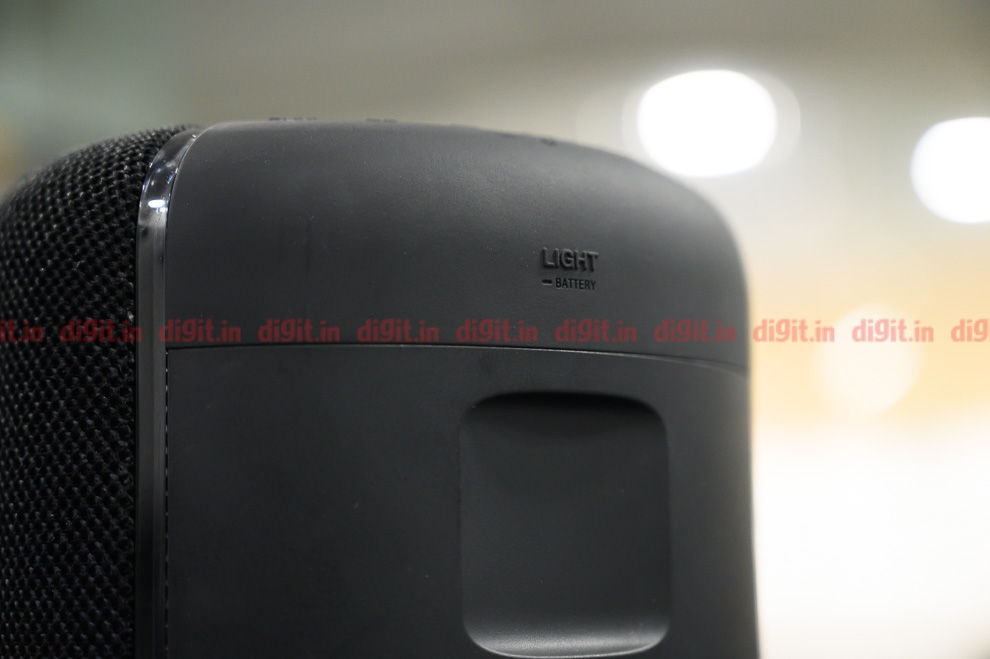 In terms of audio quality, the Sony SRS-XB402M does the job in the right environment with the right tune. Ideally, it should be used in a party setting, where the finer details of music can afford to be pushed to the background. The idea here is that the extra bass and thump will generally overpower most frequencies from the SRS-XB402M and that is what it does when listening to anything other than loud, party-oriented music. If you love Dance music, EDM or even bass-heavy Bollywood, this speaker is ideal for you. But, if you're into more extreme forms of music like heavy metal and even heavier rock music, then the Sony SRS-XB402M might not be the best option for you.