Can Samsung Onyx screens replace traditional projectors in a theatre? 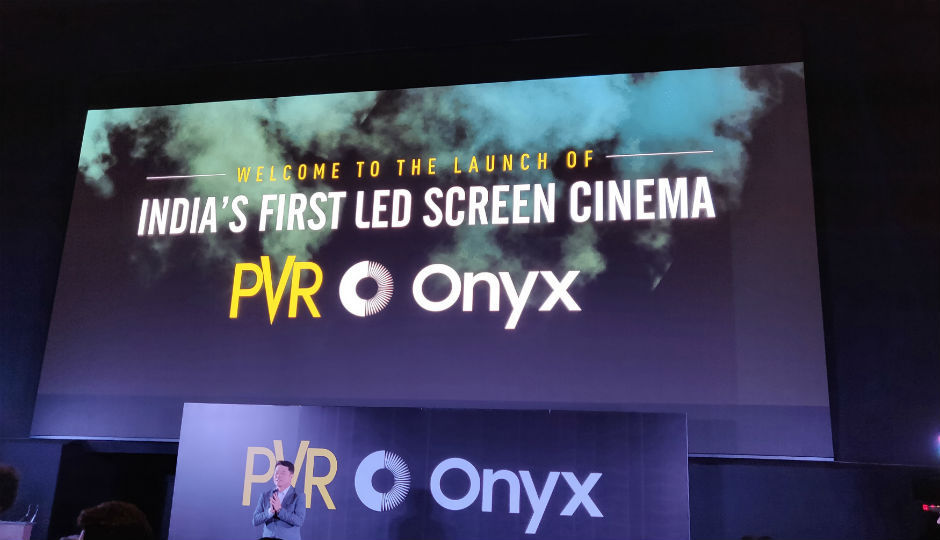 When you go to watch a movie, the tradition is you buy popcorn, a soda, find your a seat, and wait for the projectionist to fire up his equipment and enjoy the movie. Theatre projectors have been the norm since the beginning of cinema. Sure, projectors have become digital and the film reels have been replaced by servers, however we’ve still experienced projectors and not displays on the silver screen. Samsung is looking to change that. The company announced its Onyx displays for the silver screen and we had an opportunity to experience one in India.

To begin with, PVR Cinemas and INOX Group would install 'Onyx Cinema LED' in the country. The Samsung screens would be installed at PVR multiplexes in Delhi and Mumbai.  It is available to experience at PVR in Vasant Kunj in New Delhi (Audi 4) as of now. At the event, Samsung also announced that the Onyx screen is the industry's first DCI-certified cinema screen available in various sizes. Speaking of the sizes, the screen will be available in three sizes – 5.1m x 2.7m, 10.2m x 5.4m (this was the one we experienced) and the largest size 14m x 7.2m. The last size will be available starting Q4 2018. The smallest screen size has a resolution of 2K and the other 2 have a resolution of 4K.

Samsung has also partnered with JBL to provide the sound in these theatres, so if you experience a Samsung Onyx screen, you are also experiencing audio by JBL. We got a chance to check out a song and the trailer from an upcoming Bollywood movie, Stree. The sound was room filling, gave a good surround experience and made the auditorium vibrate. We can’t give a verdict on the performance of the sound system until we experience an action-packed feature film on it. Samsung also said that with its partnership with JBL, the company has worked on expanding the sweet spot for sound in a theatre.

Coming back to the Samsung Onyx screen, it boasts of several features that are a con for current theatre projector setups. To begin with, the screen caters to ambient light. The true performance of a projector screen comes to life when the auditorium is pitch dark. The slightest light coming on the screen can ruin the experience. However, since the Onyx runs on LEDs, they cater to the problem of glare. You can have some lights in the auditorium and enjoy a movie while having a meal. No need to fumble for that pizza slice in the dark anymore.

The screens boast of HDR, better peak brightness and contrast when compared to a traditional projector along with better 3D as well. It will be impossible to have a side-by-side comparison against an IMAX theatre, but we are looking forward to experiencing the same film in the two setups to draw a comparison.

We had an opportunity to speak with Mr. Puneet Sethi, VP, Consumer Electronics Enterprise Business, Samsung India at the launch event about Onyx. He said that the first screen was launched in Korea a year back which was more like a showcase and that is where the entire concept was developed. Speaking on the life of the screen, he said that the LEDs in the Onyx screen have a life cycle of 1,00,000 (one hundred thousand) hours.

If you are one that is building a home theatre and is reluctant to invest in a projector, then worry not. Sethi says that the home theatre is a market for them, however, he says that Samsung is in the process of getting into homes with this technology and are still formulating their strategies and plans around it. In case you are wondering, the technology that goes behind Samsung’s QLED TVs and Onyx are completely different. The QLED TVs come in fixed sizes whereas the Onyx can be built to fit a custom size.

The Onyx screen can be a great option for those looking for a 100 or a 150-inch screen to install in their home theatre setup and for some reason are looking for an alternative to a projector. 100-inch TVs are quite expensive simply because of the cost of making such a large panel. How effective Samsung’s Onyx screen are in the home space is something we will have to wait and watch. In the theater where we experienced the Onyx screen, the display looked quite vibrant. However, walk up real close and you will be able to see each individual pixel. How this translates to a premium home theatre setup will be very interesting to see.

There is no concrete information available about when other PVR’s or other theater brands will install the screen. There is also no information on whether customers will have to pay a premium to enjoy the Samsung Onyx screen.

In theory, Samsung is looking to cater to the cons of a projector setup in a cinema hall, but the burning question remains, can Samsung Onyx screens outperform the traditional projector in a theatre? Remember, an IMAX screen is way larger than what Samsung is offering measuring a whopping 22m x 16.1m.