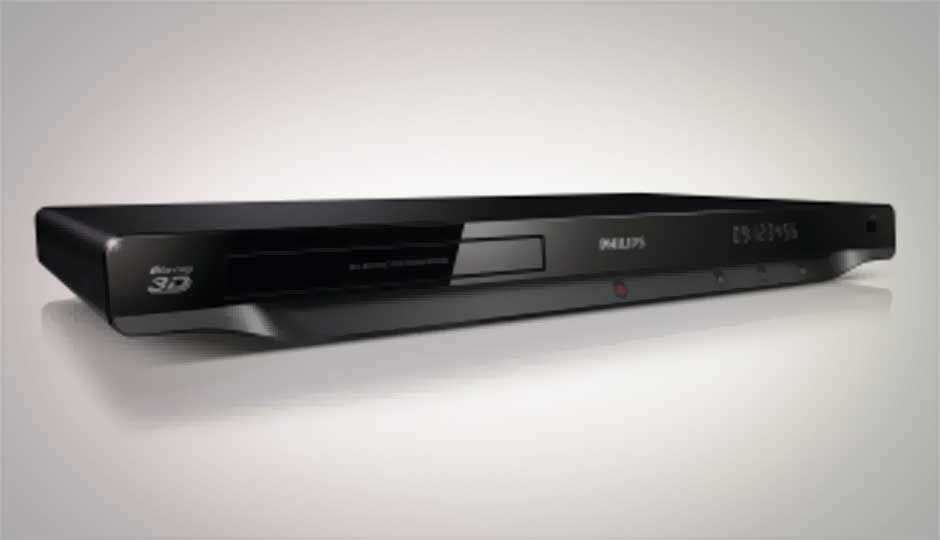 Despite being available in limited variety, buying a Blu-ray player isn’t a simple choice. On the spec sheet, most devices look relatively similar. However, the real world performance is very different, in most cases. To find out which one is the best around, we tested a bunch of these devices one after the other under the same test pattern.

Smartly dressed?
If you look at all the Blu-ray players stacked one on top of the other, there really isn’t a lot of difference. But each of them is unique in their own little way.

The fascia is divided into two parts - the glossy top portion, and the slightly angled bottom portion with a fake brushed metal finish. The glossy portion is where the Blu-ray drive sits towards the left and the USB port towards the right. If you aren’t careful, the surrounding area will be quite badly scratched in literally no time. All four hardware keys sit on the angled portion below the drive and the USB port. Circular buttons are well marked, and the power key lights up in red in stand-by mode. The top portion is completely metal with a classy light black finish. On the back is the business end for all the majority of the connectivity options. Since this player doesn’t have Wi-Fi integrated, there is a second USB port for a Wi-Fi adapter.

Looks very classy without looking very different. The centre of the fascia has the usual combination of stuff - the Blu-ray drive and the display. Below this is an angled ledge that hosts the hardware keys. Between these two elements is a space, and the USB port sits snugly there. When switched on, there is a slightly arced pale blue (some would call it white!) LED in the middle of the fascia, lending it a very classy look. All AV ports are on the back, along with the LAN port. Quite well built, mixed with the metal finish of the rest of the body.

This is like a Volkswagen Beetel in the midst of a bunch of run of the mill family sedans – the looks are quite different, and the host of logos make this the shoutiest of the lot - flamboyant stickers reminding you that the BD670 can do 3D, has integrated Wi-Fi, is DNLA capable and can play back content from an external HDD. The power key, play/pause, stop and drive eject keys are clearly highlighted in silver. The BD670 brings something that we haven’t seen on any other players in this test - a cover for the USB port. While we appreciate this, the implementation does have two issues - slightly flimsy build quality, which we fear will break after some time, and opening it every time will ensure a scratched part on the front side hurting the looks. The BD670 is well put together, even though it isn't as understated as the Philips or Panasonic ones.

Carrying forward the trend set by the Philips’ siblings, the BD110 looks very similar to its younger sibling – the BD75. But the difference is the front panel that can be opened top down, or will automatically open when the drive is ejected. Isn’t as deep as the other players in this test.

Performance goodness?
Despite largely similar feature sets, each Blu-ray player has something that sets it apart from the nearest rival.

Philips BDP3200: The interface doesn’t have a lot - very basic design elements and functionality on the home screen, and is largely blue. The upside is, you really cannot go wrong with it! For browsing files, the three-column layout is quite helpful, considering you may have files segregated into folders. Will not read some AVCHD files, but does handle AVI, MKV and even MP4 files quite well. Blu-ray disc performance is quite good. But visuals do feel a tad on the softer side, and the lack of any sharpness settings doesn’t help. You cannot change any picture settings on the fly, and will have to stop video playback and go back to the home screen. Limited web services in this model, with only You Tube available on the device. We do hear that Picasa is making its way on to these Blu-ray players soon, via a software upgrade. The remote is excellent - remains small-ish, clean layout, well marked keys and the fingers can easily remember button placement. There is a smartphone app as well, for Android and iOS devices.

Sony BDP-S380: It has the quickest starting time of the entire lot. Surprisingly, the startup times varied by a few seconds every time we booted the player - complete shutdown, unplug, plug back and restart. Once on, the Interface will clearly give out the influence of the ones on the PlayStation 3 and the new Bravia television range. There are a lot of options and setting up front – no submenus and sub-submenus. The UI allows you to quickly get to what you want, and off you go, on your way. There is no second or third layer of screens, enhancing navigation speeds. Blu-ray picture quality is excellent, and the image is definitely crisper than what we saw on the Philips BDP3200. The remote is well laid out. Lack of DivX support means quite a few AVI videos wont play back off USB drives. The smartphone remote app does need to be registered once with the device before it can work, a step that none of the other remote apps required.

Philips BDP5200: Despite similar outwardly looks, has a significantly different UI from the younger sibling, the BDP3200. Partly because it has more web based services to offer. The remote remains the same as the BDP3200, which we had appreciated for being comfortable to use and recall. Setting up the Wi-Fi is a simple task. This has a fairly quick startup time, slightly quicker than its sibling. Blu-ray playback is very similar to that as well, and with similar video and picture settings, they look just the same in terms of the final output. 3D playback is impressive overall, if the disc is originally 3D – will not upconvert 2D -> 3D. At this price, this is probably the most inexpensive branded Blu-ray player available that offers agreeable 3D performance. This player literally read every MKV, MP4 or even AVI file we threw at it, via a DVD or a USB drive. No AVCHD files would play nice though, but knowing Philips, this could easily be solved with a future firmware upgrade. For a USB drive, up to 500GB portable ones were read with ease. Net TV services include You Tube, Dailymotion, Funspotetc, but are largely region specific. You will not get to access all the services on the platform in all regions. No connectivity issues, and the videos would stream as smoothly as on a PC.

LG BD670: Oh damn! Yet another app store! That is what LG touts as the big feature in the BD670. To start off, we liked the Blu-ray and 3D playback quality. Both of which were crisper than the Philips BDP5200. The interface is the most colourful among all the Blu-ray players we have tested here. However, we find that it tends to hang quite a bit. Happened with us a couple of times when trying to play AVI and MKV files off a USB drive. The promised app store wasn’t a part of the firmware that was on the device. Filled with curiosity, we searched for an update, and it immediately showed there was an update available and prompted us to download. However, despite trying that thrice, the download didn’t even begin. We switched from Wi-Fi to LAN as well for the third attempt, but that didn’t help. Rather than risk bricking the unit, we decided to continue with the tests. We assume this is an isolated problem with this particular unit. The BD670 has the quickest startup time for a Blu-ray disc. While we did not get the Apps store on the player, there was a Premium section. This was content powered by Indiatimes - news, updates, photo galleries and videos. Navigating through this was quite slow, and surely not because of the broadband speed which was a consistent 2Mbps throughout the tests. Overall, because of certain issues this was a bit of a disappointment, and we honestly hope these issues are solved in a future software update. After all, this player has quick boot and playback start times, very good playback quality and the interface is something that all other Blu-ray players should learn from.

Panasonic BD110: This is the only player that allows you to upscale 2D videos to 3D. And for that alone, it deserves a standing ovation! No other Blu-ray player does that, even though some can play back 3D discs. Things don’t start off well though - it has the slowest boot time of all players here. However, things steadily improve from there on in. The Blu-ray playback is excellent, and the image is definitely slightly crisper than its lesser-priced sibling, the BD75. Any video that you play, unless it is original 3D, will start in the standard 2D mode. There is the 3D button on the remote, which will give you a pop-up of what type of 3D to upscale to - Full HD 3D and Side-by-side 3D. Select the one that you want, we used Full HD 3D, and the display blanks out for anywhere between 5 and 15 seconds. Incidentally, the video doesn’t automatically pause during this process. Upconverted and original 3D quality is quite good, but then again, things like depth and colour reproduction are dependent on the individual 3D TV and on the viewer’s perception. Upscale quality of SD files to HD is quite good, be it off a DVD or a USB drive. Speaking of which, the BD110 did have some issues reading one of the 3 USB drives we were using in this test. This was a 16GB one in the Fat32 format with some MP4 and AVI files on it. It read the other two promptly (albeit both are in NTFS format), which makes us wonder what really is the issue here. Cannot be the USB drive, since all other players including the Panasonic BD75 read it perfectly. We groaned at the sight of the user interface, which follows a similar selection via direction key, which is bound to confuse new users! However, it does look a lot more colourful and better laid out, with multiple screens as you go deep into the options. You will need to get a compatible web camera for video calling to work. Within the apps interface, we like the window look. However, page 3 and beyond, where some services aren’t available in India, these windows are blank.

Visit page two to check out our comparison table, where we compare each player feature by feature, and their individual performances...

In a nutshell…
Point by point, here is what you get from the Blu-ray players that we tested. Just to give you an idea, at one glance, of what you will be spending your money on.

- By far the crispest visuals among all players
- Quick boot time, but duration varies quite a bit
- PS3-esque UI helps with quick navigation
- Built well
- Lack of DivX - most AVI videos wont play off Disc or USB