Amazon Echo Spot first impressions: Not so spot on 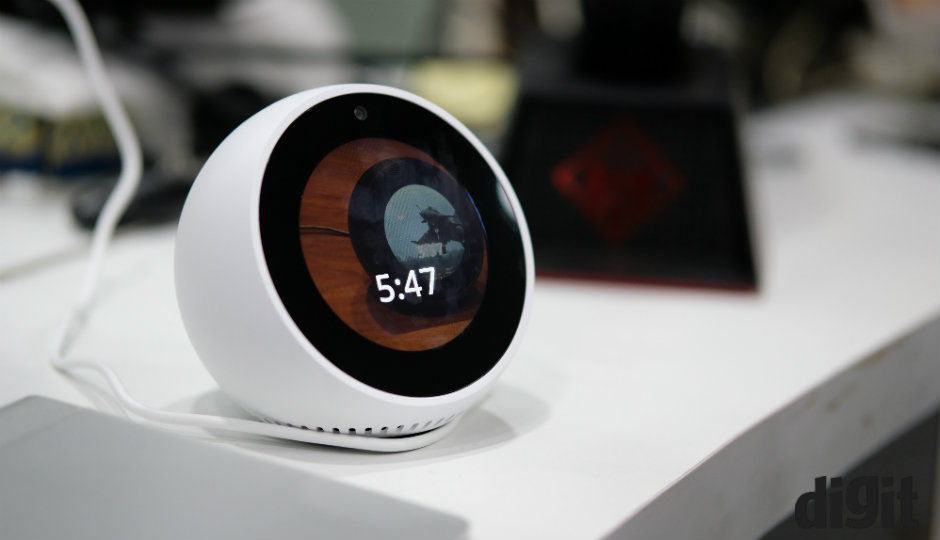 Amazon quietly launched the Echo Spot smart speaker in India last week. The device is first to bring a smart speaker integrated with a display to the country; once again, this is Amazon grabbing the first mover advantage over Google. However, was it done right? Is the Amazon Echo Spot a smart speaker you desperately need in India?

Well, it cannot be denied that the Echo Spot is an eye-catching device when you first look at it. The display is crisp and clear, the design is compact, the white colour looks elegant and the speaker as a whole sits well with urban decor. At the top of the device are three button - volume up, volume down, and a mic/camera cut-off button. The buttons sit flush with the body of the device and increasing/decreasing the volume is indicated with a volume slider on the display. The mic mute and camera disconnection button is the same and according to Amazon, it electrically shuts off the mic and the front camera to avoid any unwanted drop-ins or hacks.

The circular touchscreen display has a coverage area of 2.5-inches, surrounded by a half inch thick circular bezel. The display comes with adaptive brightness which adjusts itself according to surrounding lighting conditions. Brightness can also be controlled by swiping down from the top of the display to bring up the Home button and Settings menu. 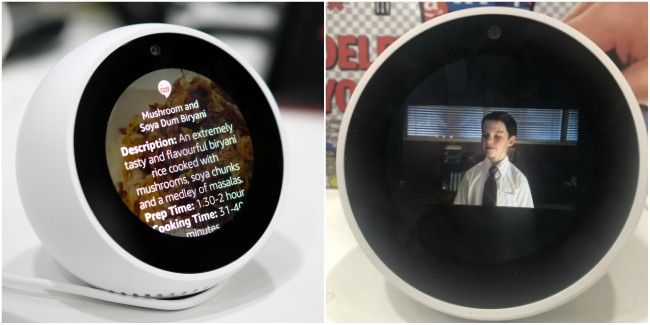 In terms of clarity, the display does not disappoint. It is sharp and renders colours well enough for a 2.5-inch offering. Text is also easy to read and its various customisable clock faces make the device standout. The real question is, what can the display be used for?

If you are looking for some video/photo-enabled Alexa skills for the Echo Spot, the Alexa app now has a dedicated section displaying skills that have been enhanced for the smart speaker with a display. Most of these include news and information skills from the likes of NDTV, India Today, ESPN Cricinfo and more. The handful of Echo Spot-specific skills also include - Uber, Ola, Saavn, Zomato, Sanjeev Kapoor recipes and astrology skill GaneshaSpeaks. The Uber and Ola skills now provide visual feedback through the Echo Spot’s screen. The NDTV news app is actually pretty decent and I found myself sitting on my office desk, watching actual news bulletins on the display through my Flash Briefing. The only issue here is that the textual information displayed on the tickers gets cut because of the weird aspect ratio on the screen. Some other visual and graphical information also gets cropped out. This is the same case while watching videos on the device through Amazon Prime Video. Yes, you can watch all your Prime Video shows and movies on the Echo Spot, but don't expect an immersive experience.

The Echo Spot was supposed to bring up trailers from IMDB and other videos from Vimeo at launch in India, but contrary to what Amazon confirmed to us during a pre-launch briefing, this has not happened. The trailers are only picked up from Amazon Prime Video, so naturally no fresh trailers are available and no music videos are available through Vimeo or anywhere else. YouTube, naturally, is not available on the Echo Spot given that Google pulled it out from all Amazon devices owing to competition.

Visual feedback on the Echo Spot is also available in the form of album art covers while playing music from Amazon Prime Music and Saavn. This is a cool new experience which adds to the Echo Spot’s appeal. However, the lack of varied video content services on the device makes it less desirable.

Alexa and her Skills

Coming to Alexa’s performance, in the few days we spent using the Echo Spot for this first impressions, the digital assistant’s understanding of commands was a bit wonky. When I asked Alexa to book an Uber, it showed me a Wikipedia link for the Indian Rupee! Now those two are completely unrelated words that don’t even sound similar.

The second time I tried, though, Alexa opened the Uber skill asking me to set a default pick-up address, which I set as the address of my Echo Spot. Only after setting the default pick-up address could I go ahead and view the closest available Uber Go. Apart from Alexa’s wonky understanding of command, there were three other problems I faced while using the Uber skill on the Echo Spot. Firstly, I could only order a cab from my default address, so if I ever move the Echo Spot to a different location I will need to change my default address repeatedly. Secondly, I could not customise the category of cab to book (Pool, premium, etc). The third major issue with Alexa’s understanding of commands while booking an Uber is that if you need to reject an available cab, there is no way to do so, unless you physically press the home button or command Alexa to “return to home screen”. Let me explain this better -

Uber’s Alexa skill found me a cab and told me it is two minutes away. It then asked me if I want to book said cab. I replied ‘No’. Alexa, once again, repeated the same question. I said ‘No’ again. The third time Alexa repeated the question, I replied with “Cancel my request”. The fourth time, I just got frustrated and tapped the home button to exit the Uber skill. The experience was non-intuitive to say the least. 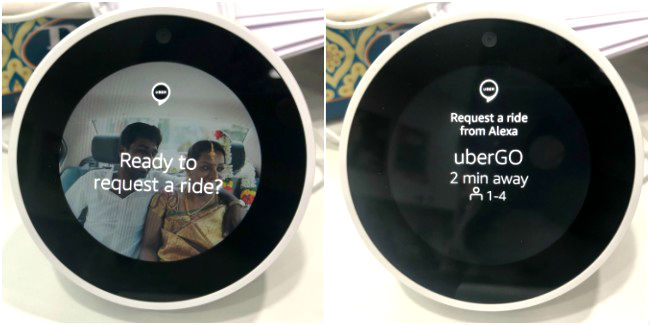 And this is not the only place where Alexa and I encountered a misunderstanding. The Echo Spot keeps displaying ‘Trending’ stories from around the web when in idle condition. If you ask the AI to read out any of these trending stories, the text of the story appears on the screen and the digital helper starts reading it out as if from a teleprompter. The problem here is that Alexa randomly stutters and stops reading the text midway. It’s comparable to a news anchor on television whose teleprompter suddenly goes blank leaving him/her speechless on air.

There were several other instances where the Echo Spot’s performance disappointed. It sometimes started playing videos in the background when a video-enabled skill was opened, while the display remained stuck on the homescreen. However, this is nothing Amazon can’t iron out with a quick update.

When it comes to placing Alexa-to-Alexa calls, the video quality on the Echo Spot was good. I placed a call to a colleague with the Alexa app on his phone and it worked seamlessly. The trick here is that you have to ask Alexa to “Show My Contacts” in order to view a list of people in your contacts that either have an Echo device or the Alexa app. Surely you understand that this means giving the device access to your phone's complete contacts list. Apart from Alexa-to-Alexa calling, there is no other video/voice calling facility available on the Echo Spot. Although, Amazon spokespeople did tell us that the company is not closed off to the idea of partnering with Facebook or WhatsApp to integrate the latter’s video calling services with Alexa. 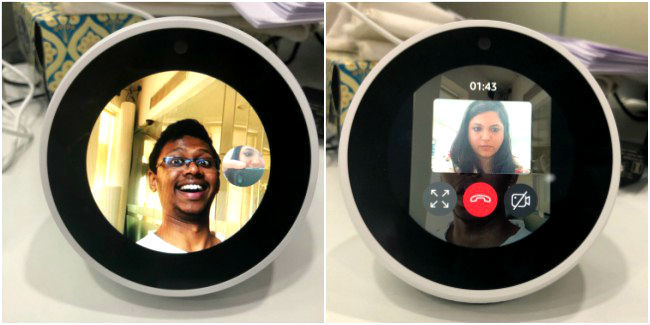 While video reception worked pretty well on the Echo Spot, the same cannot be said for the audio quality of the call. Audio call quality through the speaker was patchy and this was when the device was hooked up to a 50Mbps Wi-Fi connection. On the other end of the line, the smartphone receiving the call was on a 4G network, which could have been the issue causing the patchy voice reception. However, we will have to test this out more thoroughly in our in-depth review.

What I did like here was that the Echo Spot displays the duration of each call after it ends which makes for an interesting visual metric. What I disliked, was that while the Alexa app on my phone displays a history of every action I perform on the speaker, my calling history was nowhere to be found.

The Echo Spot houses its speaker grille at the bottom of the device, but the speakers are not technically bottom firing. The grille is slightly slanted to let the sound dissipate in a 360 degree manner from the sides of the device. The audio quality of the speaker is passable. It is loud enough for casual usage, but not enough to start a party. The good thing is that like every other Echo speaker, this one also features an Aux-out port which lets you hook it up to other high fidelity speakers of your choice.

For now, this concludes our first impressions of the Amazon Echo Spot. As goes with all smart speakers, usage over a period of time is what determines their true performance. Stay tuned for an in-depth review and smart speaker comparison on Digit.in.