Portable Bluetooth speakers can be an essential accessory to accompany on tours, or even at home. These portable speakers can connect wirelessly via Bluetooth, NFC or even via aux cables, and deliver decent, bright audio. They are also powered by batteries that last through a day’s playback. Some of the portable Bluetooth speakers here are also water- and dust-resistant, making them all-round portable speakers for various users and enthusiasts. Here, we list 10 best portable Bluetooth speakers, available in India under Rs. 10,000. Although the prices of the products mentioned in the list given below have been updated as of 10th Aug 2020, the list itself may have changed since it was last published due to the launch of new products in the market since then. 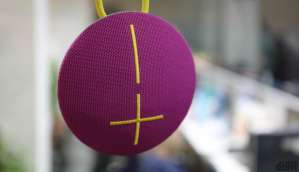 The Ultimate Ears Roll 2 quickly became the de facto recommendation for portable speakers under Rs. 10,000 in India. It sounds sweet, well-balanced and wholesome, and even looks fun and chirpy. Oh, it is also water resistant!

The Creative Sound Blaster Roar has been a long-standing favourite, and with its reduced pricing now, brings its loud and powerful audio along with a host of features. You can charge other devices on the go, talk on the phone, listen to FM and more. It is also impressively sturdy.

The JBL Charge 2+ sound quite bright, sweet and wholesome, and are among the best-sounding speakers for its price. It also includes speakerphone, can charge other devices, even after offering up to 11 hours of playback and water resistance.

Ultimate Ears has continued the legacy of the UE Boom, and come up with UE Roll - an excellent Bluetooth speaker priced at Rs. 8,490. It delivers bright, clear and powerful 360-degree audio, and the tone is very pleasant to listen to. Additionally, it is available in bright colours, and the added waterproofing makes it the pick of our recommendation. You will almost certainly never go wrong with it.

The JBL Flip 3 follows up on excellent work by JBL in the budget portable speaker segment. It is amply loud, and delivers ample amount of power. It comes second to the UE Roll, owing to marginal distortion at high volume levels. It also has speakerphone support, and you can also pair up multiple of these via the JBL Connect app.

The tiny Sony cube sounds quite loud for its price, and does well with most tracks, particularly tight in the lows. It is neat and elegant, and is among the lesser-known of portable speakers in this segment.

JBL's rather tiny Clip 2 is more of an activity-oriented portable speaker that gets the job done at an affordable price point. It is not entirely overwhelming, but looking at its utilitarian perspective, it actually works better than what you'd initially expect.

Bose's most affordable speaker ever introduced in India sounds fairly decent, barring a slightly weak midrange. A line of peppy colours and the sheer value of the Bose brand contributed heavily to make it a popular idea among young buyers in India.

The Logitech X300 is significantly less expensive than most in the leaderboard, but impresses with audio clarity and quality. The audio delivery is tight, and the speaker has excellent audio balance. Logitech has thrown in neat, playful colours to the speaker, and the light weight and ergonomics make it very easy to be carried around.

The Jabra Solemate is incredibly loud, delivers decent audio, and presents its entire packaging very neatly. For instance, you can stow away the connecting cable to the back of the speaker, a bag will allow you to play it in muddy areas without getting the speaker dirty, and the running shoe-sole design is miles apart from conventional speaker builds. It plays audio much larger than its size, and the bass sounds really tight on this one.