Building a gaming computer requires careful consideration while picking the right graphics card and CPU. You have to ensure that one does not bottleneck the other. Pairing a high-end CPU with a mid-range GPU or the other way around will simply empty your wallet and give you sub-par gaming experience. To get things right, we've put together a list of the best CPUs for gaming from Intel and AMD. All processors in this list are within the latest three generations from either manufacturer so you'll find CPUs after 8th Gen Intel and from the first gen AMD Ryzen onwards. You will have to pair some of the unlocked processors with the right motherboard to get the most out of them. We'll tackle that in a different article. Although the prices of the products mentioned in the list given below have been updated as of 19th Aug 2022, the list itself may have changed since it was last published due to the launch of new products in the market since then. 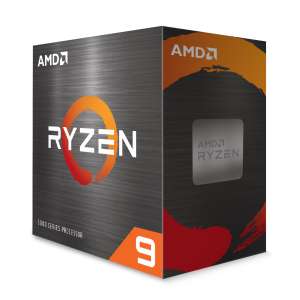 Having completely overhauled the microarchitecture with Zen 3, the new Ryzen 5000 desktop CPUs have taken the crown from Intel for gaming. With 16 Cores / 32 Threads, the AMD Ryzen 9 5950X is a worthy upgrade to the 3950X thanks to its improved single-threaded performance. When paired with an AMD Radeon RX 6000 graphics card, these processors get a slight boost thanks to the Smart Access Memory feature that allows the CPUs to directly address the GPU memory. Thanks to this feature the AMD Ryzen 9 5950X provides much improved gaming performance over previous gen AMD processors.

The Intel Core i9-10900K is the first mainstream Intel processor to have 10 cores / 20 threads. Previous processors with this core configuration were from their HEDT lineup. The base clock is 3.7 GHz but the max Turbo frequency can go up to 5.3 GHz thanks to Intel Thermal Velocity Boost (TVB). Despite such high clocks, it's still a 95W TDP processor. However, during operation these things can scale up and the actual power consumed can go as high as 250W so this one is a hot head. Nevertheless, it's the best processor for video games at the moment thanks to it's high frequency.

Another noteworthy gaming processor from the AMD Ryzen 5000 series family is the new Ryzen 9 5900X. It features 12 Cores / 24 Threads and has a max boost clock of up to 4.8 GHz. As mentioned previously, the new Zen 3 microarchitecture has made AMD processors really good at gaming compared to the older Zen 2 processors and with the help of Smart Access Memory, their gaming performance is even further enhanced.

The Intel Core i9-9900K is the company's first ever mainstream Core i9 chip. It comes equipped with eight cores, sixteen threads and the overclocking ability to a maximum of 5.0GHz clock speed. The Intel Core i9-9900K also features the highest thread count, being 16, in the Coffee Lake Refresh lineup. This leads to hyper-threading performance that is capable of outpacing its AMD competitors. Intel has also reintroduced a soldered heat spreader which helps this processor manage the thermals better when running under load for extended duration.

The Intel Core i7-9700K is a capable gaming processor that doesn't break the bank. It features eight cores and eight threads. Its maximum Turbo Boost speed is bumped by 200MHz, which takes its top speed up to 4.9GHz. However, you will need to pair this up with a good cooling solution when overclocking to avoid thermal throttling. For PC gamers, this processor is a smart purchase since it serves up almost similar performance, at a lower cost, than the Intel Core i9-9900K.

The Intel Core i7-8700K is a hexa-core processor which rises above Ryzen when it comes to hyper-threading, even with fewer cores. The chip overclocks like a champ and is one of the best processors in the Coffee Lake Lineup. As mentioned before, it comes with 6 cores, along with 12-threads and high core clocks. The gaming performance is quite stellar with the greatest improvements seen in titles that run FHD for Ultra quality settings.

A recent addition to the list, the 10th Gen Core i5-10600K improves upon the 9th Gen Core i5 processors by enabling HyperThreading so the value proposition in getting a Core i5 desktop processor has improved by a large magnitude. Moreover, with 6 cores, the 10600K is sitting at the sweet spot for gaming applications since most games top off at six physical cores. As with all 10th Gen Core processors, there has been an improvement in the clock speeds with the base frequency now being 4.1 GHz and the Max Turbo Boost frequency scaling up to 4.8 GHz.

The Intel i5-9600K is a mid-range processor which is an iterative update over the previous-gen model. The processor provides the best performance for gaming at its affordable price point. It comes equipped with six physical cores without Hyper-Threading technology, and an additional 9MB of L3 cache in a 95W package. The company also provides multi-core Turbo Boost frequencies in which the heat is maintained using solder-based thermal interface material. It's relatively low power draw is good for mainstream motherboards. You will need a Z-series platform if you want to overclock.

With 16 Cores / 32 Threads, the AMD Ryzen 9 3950X is the beefiest processor in this list. Usually, with high core counts, you see a reduction in base and boost frequencies and that in turn affects gaming performance so it's a surprise that such a beefy processor even made it to this list. Nevertheless, the 3950X is great for gaming and given the high core-count you can even multitask and stream using the same PC with ease. That makes the 3950X an ever more appealing choice.

The AMD Ryzen 9 3900X is one of the best mainstream processors on the market right now. It's multi-threaded performance and the inclusion of PCIe 4.0 makes it one of the best picks, if you don't consider stepping up to the HEDT market. The processor is packed with 12 cores and 24 threads and is priced similarly to the Intel Core i9-9900K, which has only 8 cores and 16 threads. It can handle gaming, video and 3D work with ease and is slowly beginning to match up Intel in single-threaded performance as well.