Laptops built for gaming tend to have certain features that are geared towards improving your gaming experience. However, they also cost a lot so for folks wanting a cheap gaming laptop, certain compromises need to be made. You will most likely not get a high refresh rate panel in a gaming laptop under 50,000, then you'll lost out on additional storage in gaming laptops under the 50,000 and 40,000 price brackets. And you'll be lucky to even spot a decent processor or even a discrete graphics card in gaming laptops under 30,000. So for this lister, we've tried to maximise your gaming experience in under 60,000 with these budget gaming laptops. Most of them are powered by the latest 9th Gen or 10th Gen processors from Intel or the Ryzen 3000 series of processors from AMD. We're yet to see any laptops based on the Ryzen 4000 series of processors so those laptops are absent from this list till we get any. Thankfully, the discrete graphics cards that all of these laptops have will help you get good FPS in games. Although the prices of the products mentioned in the list given below have been updated as of 6th Aug 2022, the list itself may have changed since it was last published due to the launch of new products in the market since then. 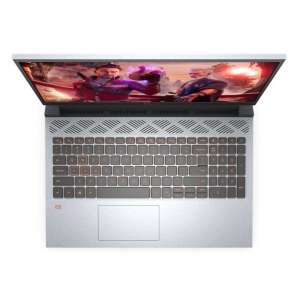 The Dell G15 Ryzen Edition Gaming Laptop features a mix of good build quality and specifications that are aimed at tackling most games that gamers like to play. It's powered by an AMD Ryzen 5 5600H along with an NVIDIA GeForce RTX 3050 graphics card. The downside is that it only has one RAM DIMM which reduces its performance when compared to other gaming laptops which sport two DIMMs and have dual-channel memory configuration. As for storage, it comes with a 512 GB PCIe M.2 SSD which is sufficient for installing the operating system and hosting a few video games.

The Acer Aspire 7 laptop isn't exactly built for gaming but from a specification standpoint it has the best graphics card in the price segment (GTX 1650) along with the Intel Core i5-9300H. Moreover, Acer has also included a 512 GB SSD. The only thing missing out happens to be a high-refresh rate panel but given the GPU, that might be asking too much for most games except the few that are optimised for high FPS. Summary specs: Core i5-9300H, GTX 1650, 8 GB, 512 SSD, 15.6-inch 1080p

MSI is one of the few manufacturers that are dedicated to making gaming laptops. The MSI GF63 Thin is powered by an Intel Core i5-9300H along with an NVIDIA GTX 1650 Max-Q graphics card. The MAX-Q variant is more power efficient than the MAX-P a.k.a. normal variant but is a teensy bit lower in terms of performance. However, MSI also has the Dragon Centre and several applications that are geared towards improving your gaming experience. Summary specs: Core i5-9300H, GTX 1650 MAX-Q, 8 GB, 512 SSD, 15.6-inch 1080p

Legion by Lenovo is a dedicated gaming brand from Lenovo with aesthetics as well as specifications that are designed to cater to gamers. While the specs are mostly similar to the other laptops in this list, we have the additional storage as you get a 256GB SSD along with a 1 TB hard disk drive. Summary specs: Core i5-9300H, GTX 1050, 8 GB, 256 SSD + 1 TB HDD, 15.6-inch 1080p

ASUS TUF Gaming series is about making their hardware more accessible and we see just that happening with the FX505DD as it combines the Ryzen 5-3550H with the GTX 1050 and even has a high-refresh rate panel. A recent drop has made this particular combination even better than before. Summary specs: Ryzen 5-3550H. GTX 1050, 8 GB RAM, 1 TB HDD, 15.6-inch 120 Hz 1080p

Xiaomi happens to be the latest company to bring a laptop to India which is powered by an Intel Core i5-10210U processor with the GPU being an NVIDIA MX350. You can play a few games on the MX350 as long as you keep the game settings to low or medium. Both, the CPU and the GPU are built for power efficiency and not for extended gaming sessions. Summary specs: Core i5-10210U, MX350, 8 GB, 512 SSD, 14-inch 1080p