The LG LG UHD 4K 55UF950T television is one of the best in the market right now and it outperforms the budget Micromax and Vu TVs by a mile. That said, the television is too expensive for most to afford right now, and the pricing is the only reason why it's hard to recommend to value buyers.

The best part about big screen 4K TVs nowadays is that they’re capable of a lot more than last gen TVs, and the worst part is that they cost a bomb. Take the LG UHD 4K 55UF950T smart TV we just reviewed for example. Throughout the review, a lot of us were drooling over the picture quality and performance of this TV, but every time someone uttered the words ‘I want it’, it was followed by a sigh when they were told the price.

Having worked with two Micromax televisions back to back, the LG 55UF950T was a treat indeed. While the Micromax TVs were still quite good for the pricing, this is the cutting edge of TV technology. From the crescent shaped stand at the bottom to the metallic finish on the bezels, this television would fit right into most entertainment center setups and make them look good. 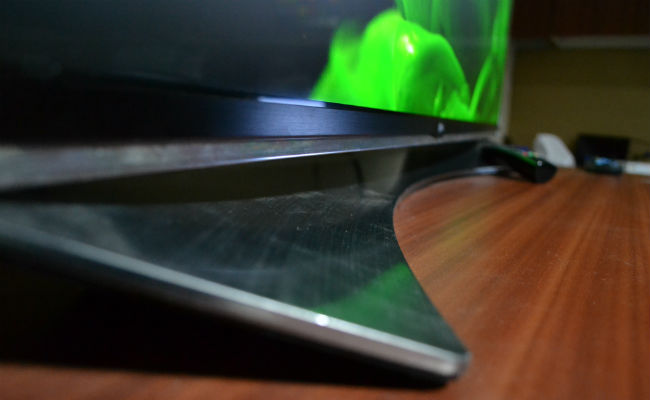 It’s a 55 inch giant television, that looks uber premium. There’s a small LED on the bottom centre of this television, right on top of the LG logo. While its primary job is to signify when the TV is on/off, it’s one of those things that will give a high-end entertainment center a futuristic feel. 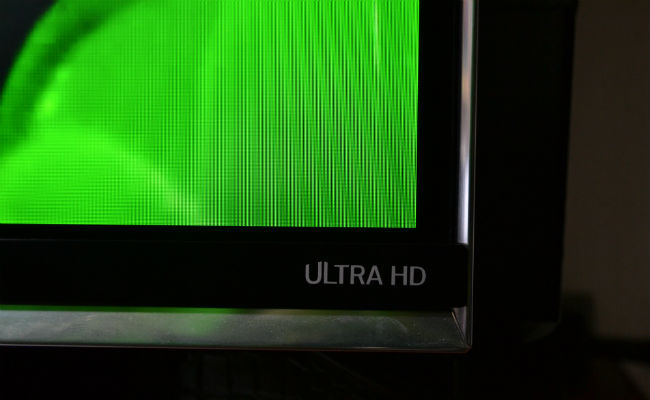 If you’re spending this much on your television, chances are, you want you entertainment center to look good, which this LG TV will accomplish without any hassles. 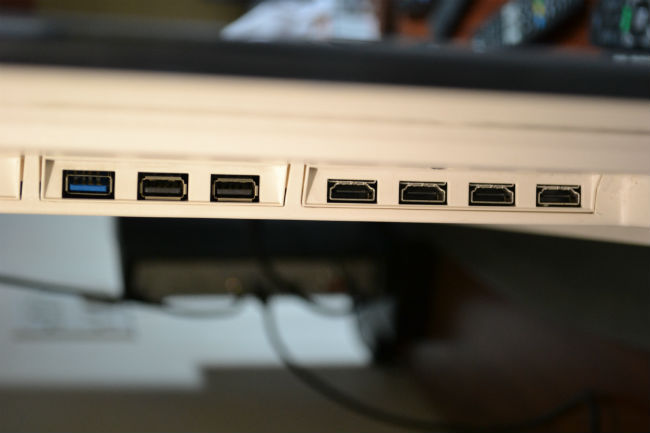 In terms of the ports on the TV, we’re primarily concerned with the HDMI and USB ports here. First and foremost, we would have liked an extra USB 3.0 port on this television, even if it was at the expense of a USB 2.0 port. Playing 4K content from external media required either an HDMI or a USB 3.0 port, and on a ultra high-end television like this, one port is just not good enough.

There are four HDMI ports though, which means there’s enough for a set-top-box, two streaming devices (like Chromecast and Teewee) and one more for whatever you want to use it for. For gamers, this will most likely go to the gaming console. 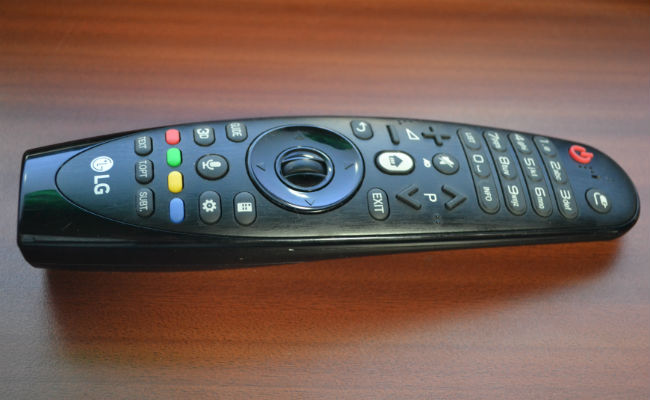 The remote is also pretty straightforward. There’s a 'source' button for shifting through the input ports and the 'settings' options are easy to manoeuvre. What you will need to get a hold of is actually using the remote with the TV. Right at the outset, you need to pair the remote with the TV by turning the TV on and pressing the wheel on the remote. After that, it works similar to a mouse on a PC. You move the remote around and the cursor moves on the screen. The wheel is a nice touch, allowing you to scroll through various menus on the television. It’s got kind of a learning curve, but not one that you’ll complain about. Moreover, once you’re used to it, which should be in a few hours, you won’t want your remote to function any other way.

LG has unsuccessfully tried its WebOS platform on multiple devices by now, but never has it looked closer to being successful than now. Coupled with the remote, WebOS is something very new if you’ve been using regular televisons till now. But it also makes this one of the few really usable interfaces. 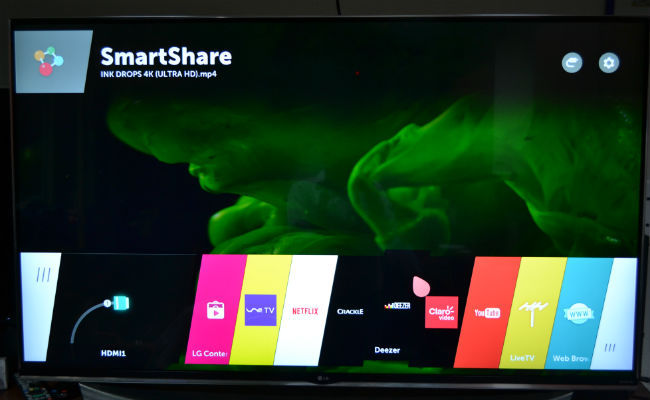 What we mean by this is that it’s responsive and smooth. WebOS isn’t exactly buttery smooth, but it’s a much smoother interface than we've seen on any other television. There’s a button on the remote that brings you directly to the apps available for the TV, while the 'source' and 'settings' buttons unveil dropdown menus on the right hand side of the screen. You can simply move the cursor to the required options and press the wheel to choose. 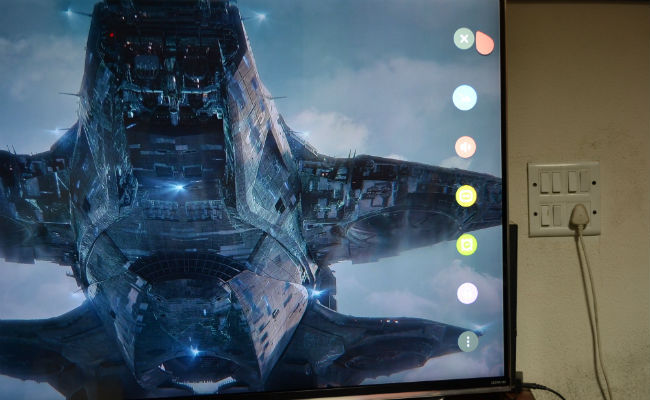 The only downside of the entire ecosystem is that most of the apps built into the LG TV don’t work in India. Apps like Netflix and Crackle do not function in India, which leads us to wonder whether LG will look to replace them with more India-centric applications, Hotstar perhaps, if they have a TV version.

On to the most important aspect of this LG UHD 4K TV review then — the picture quality. The panel on this television stands without compromise, it is evenly lit and does not suffer from any back-light bleeding issues. In addition, the LG 55UF950T upscales content, and the upscaling engine does a good job of upscaling SD content, making it appear a lot better on its large 55-inch panel. 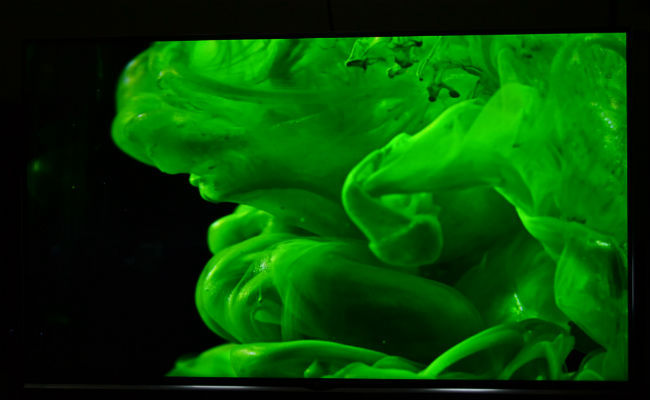 You will have to play around with the settings a little bit, to get the picture quality right as per your taste and ambient light conditions. The LG 55UF950T offers a wide range of settings ensuring enough control of all major aspects that govern image quality. This feature is particularly useful when you have multiple devices connected to the TV and you want to configure and fine-tune the picture quality from each source seperately. For instance, we did turn on some of the noise control and contrast enhancing features for our satellite TV HDMI input source. While for the XBox (gaming console) and PC input, we ensured all optimizations were off since we were sure of the quality of the feed and did not want the TV to employ any additional image enhancing alogrithms that can negatively impact a pure high quality digital feed.

What’s heartening is that the TV can even deal satisfactorily with SD quality content. That’s a big issue with 4K and even Full HD televisions nowadays, they tend to ruin SD content, making them seem worse than they already are. Considering that this is the kind of content that still thrives in India, it’s a big issue. The LG 55UF950T doesn’t quite solve this issue, but it handles it satisfactorily. 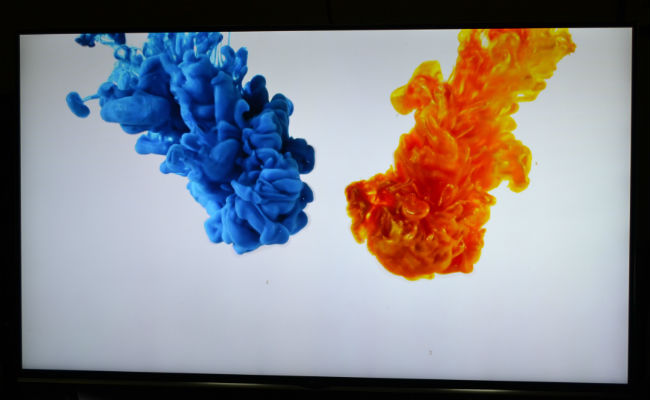 To the 4K side of things then; you hardly have any content available on television at such a high resolution right now. This means you’ll mostly be supplying your own content through the HDMI or USB ports. If you do, you’ll realise that the LG 55UF950T is very good at doing what it’s supposed to do, that is, displaying 4K content. In addition, it is capable of playing 4K content at 60Hz, which means the best of content will be played in the best possible manner. This is one of the compromises (and a big one at that) you make with the Micromax 4K TV, which costs less than half of this television.

What you’ll most likely be viewing on this TV often though is Full HD content, and the LG UHD 4K deals with that very well. The picture is even throughout the display, with little to no tearing. The colours pop, with very good blacks and whites. Our measurements show a contrast ratio of 650:1 at 50% brightness, which is really good.

That leaves us with the audio quality. The LG 55UF950T has a 4.2 channel system with 60W output. It offers six different modes, including Standard, Cinema, News, Game, Cricket and Music. The surround sound effect is also available.

In terms of the audio quality, this TV does well. It’s not super loud, but it’s loud enough that you won’t need any external speaker system with it, just to get decent, loud sound output.

With so much done right, why will you not buy the LG 55UF950T UHD 4K TV? Simply because you and I can’t afford it. There aren’t many who can afford to spend Rs. 2,94,000 on a television right now, but sadly, that’s the price LG is asking for it (as are Samsung and Sony as well). And the price is the only reason why this TV is hard to recommend to anyone looking for value.

The LG 55UF950T is easily one of the best televisions that we’ve seen in a long, long time, and it beats the likes of Micromax and Vu’s low cost 4K TVs, but it can only be bought by a select few.