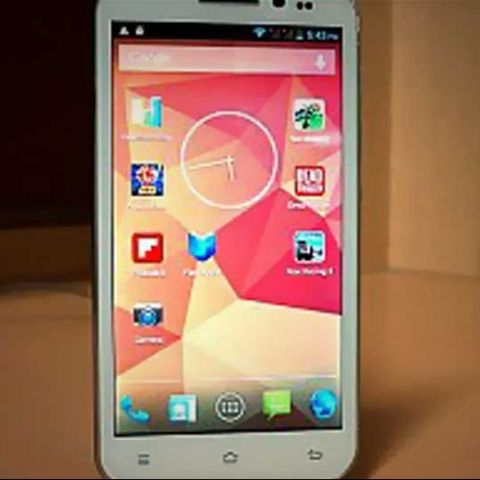 The WickedLeak Wammy Passion Y is an impressive budget smartphone, especially with the display. The only downside to it is that it is simple looking, slightly heavy, the cameras are lacklustre, and the keyboard is slightly inconsistent. On the bright side, the multimedia capabilities are nice. It runs on Android 4.2 and is an overall good performer courtesy the hardware. If you are in the market to invest Rs. 15,000 in an Android smartphone, you can consider the Passion Y along with the Canvas HD and the LG Optimus L7 II. If you would like to try out the Windows Phone OS, you can take a look at the Lumia 620 too.

Ever since the launch of the Micromax A116 Canvas HD, every budget smartphone maker is gunning to place quad-core SoC on its smartphone. The good thing is that all these devices run on the MediaTek MT6589, which we think is quite an impressive chipset.

We have seen devices such as the Intex Aqua Wonder Quadcore, Xolo Q800 and many more bring the MediaTek MT6589 to life. Today we have with us the WickedLeak Wammy Passion Y. The smartphone has the same innards as any other 5-inch budget quad-core smartphone. It however is the first such device that runs on Android 4.2 Jelly Bean straight-out-of-the-box. Does it deserve a second glance?

At a Glance
At first glance, the WickedLeak Wammy Passion Y looks like your run-of-the-mill budget 5-inch smartphone with nothing to grab your attention. It is when you switch on the device that you will find something interesting. The Wammy Passion Y launched with Android 4.1 Jelly Bean and the company promised a v4.2 update, which was subsequently made available. The unit we received ran on v4.2 straight-out-of-the-box. This gives users access to the lock screen widgets, the revamped swipe down notification, Face Unlock and other Jelly Bean goodies. Another interesting feature of the smartphone is that it has a 5MP front facing camera. The only other budget smartphone offering 4.2 out-of-the-box is the Spice Stellar Pinnacle Pro.

From the above table you can see that the hardware of the WickedLeak Wammy Passion Y is at par with what some of the competing devices are offering. It brings nothing new to the table.

Design
The WickedLeak Wammy Passion Y has your average candy bar form factor. The front of the device has the 5-inch display. Above the display you have the earpiece and the front facing camera. Below the display we have the standard menu, home and back buttons.

The top of the Wammy Passion Y has the 3.5mm headphone jack whereas the volume rocker and the power button rest on the right of the device. The bottom has the microUSB port. The rear of the phone has a pearl white finish which is very glossy and hence a fingerprint and dust magnet. The bottom of the rear panel has speaker grill. Rip the back open and you have the battery along with which rests the dual-SIM card slots and the microSD card slot.

The WickedLeak Wammy Passion Y smartphone has curved edges and is comfortable to hold in one hand. It does feel slightly thick. Overall, the design of the WickedLeak Wammy Passion Y is your tried-and-tested budget Android smartphone and this isn’t necessarily a bad thing. Other devices like the Micromax A116 Canvas HD and the Spice Pinnacle Pro bring some added design elements such as a curvier and slimmer build.

UI and Interface
From the get go, the UI and interface of the WickedLeak Wammy Passion Y is stock Android. If you have used a Nexus 4 running on Android 4.2 only then you will be able to notice the light customization that is present on the Passion Y.

As always, you have access to 5 customizable home screens and an app drawer that hoses all the apps you download from the Play store. Thanks to the tweaks brought about by Jelly Bean, the rest of the interface of the Wammy Passion Y is quite smooth.

Performance
Here’s a quick look at how the WickedLeak Wammy Passion Y performs against the Micromax A116 Canvas HD.

Since the hardware under the hood is nearly identical, it is no surprise that the benchmark scores are neck-to-neck between the Canvas HD and the WickedLeak Wammy Passion Y.

The touchscreen of the WickedLeak Wammy Passion Y is very smooth and a treat to use. Navigation response is spot on. The only problem with the touchscreen is that the keyboard isn’t the best. It is stock Android but I inevitably ended up hitting the “b” letter every time I wanted to hit the space bar. I had to make a conscious effort to tap lower in order to get it right. There were other moments where I felt a slight glitch in the keyboard, but these were far and few.

The IPS display with its 1280x800 pixel resolution is a treat to consume multimedia content on. We saw a bunch of MKV, MP4 HD videos and some AVI SD videos and all of them ran very well without any problems. Navigating the timeline of the videos too was smooth and there was no hiccup in the playback. The movies looked sharp but there was some loss of details in the black levels, especially in the scenes showcased night. The animated movies that we saw looked vibrant with the colour representation.

Browsing the Internet and reading e-books on the Wammy Passion Y was a very good experience. The text was crisp around the edges and there was no pixilation and that is a very good thing.

The Wammy Passion Y’s audio output is at par with the Canvas HD. The HD video audio was a bit dimmer than we’d like but the SD files, apps and games sounded great.

Seeing that the app, Flipboard, caused the Micromax A116 Canvas HD to crash, we tried the app on the WickedLeak Wammy Passion Y as well. We are happy to inform that the app ran very smoothly.

The rear of the WickedLeak Wammy Passion Y has an 8MP shooter that isn’t very good. There are areas of smudging all around the image when you blow it up to 100%. The focus and sharpness in the center of the image is decent but we have seen better overall performance from an 8MP camera on other smartphones. The front-facing 5MP camera isn’t impressive either. Put simply, the images lack detail.

Now, coming to the ability of the WickedLeak Wammy Passion Y to work as a phone – to start with the call quality of the device is really good. The audio is crisp at both ends. On the other hand the loudspeaker screeches especially when the volume is full. The battery life of the device is good enough to make it through the day with average use of social networking, calls, and texting keeping the brightness of the display on the lower side. In our continuous vide playback test where we kept the brightness and volume at gull, the smartphone lasted for 3.6 hours.

Bottom Line
The WickedLeak Wammy Passion Y is an impressive budget smartphone, especially with the display. The only downside to it is that it is simple looking, slightly heavy and the keyboard feels a bit off. On the bright side, the multimedia capabilities are nice. It runs on Android 4.2 and is an overall good performer courtesy the hardware. The camera on the smartphone is something you can overlook. It is ok for clicking images where the lighting condition is good and if you will only use these images for social networking sharing. Don’t expect this to replace your point and shoot. If you are in the market to invest Rs. 15,000 in an Android smartphone, you can consider the Passion Y along with the Canvas HD and the LG Optimus L7 II. If you would like to try out the Windows Phone OS, you can take a look at the Lumia 620 too.