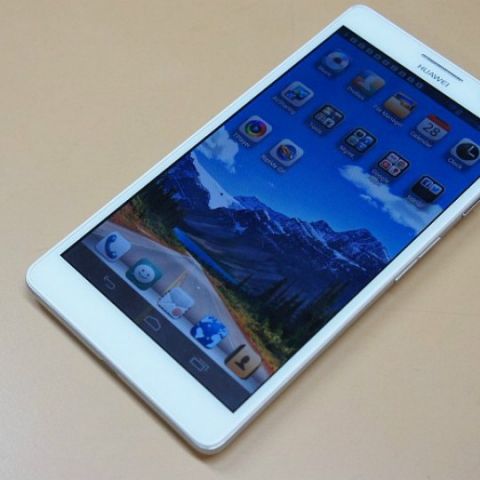 For Rs. 24,900 you get some pretty good specifications under the hood of the Ascend Mate and a really large display. For the same price you get some really great performing devices such as the Nexus 4, Samsung Galaxy S3 and more. What the Ascend Mate brings to the table is a really large display that's good for running multimedia content and playing games but considering the size of the device we wish the resolution were higher than 720p. The camera on the phone is lacklustre. You can consider picking up the Mate if a large display is mandatory for you, and you don't mind using a new UI. It's a better option than the Galaxy Mega 5.8 as well, if you are looking for performance and not familiarity.

Samsung for a while has been dominating the phablet market with the Note mobiles, go-to-devices for most looking for a massive display. Now however, with 5 inch displays a lot more common, especially on top-of-the-line, not technically hybrid, flagships devices.

The Korean consumer electronics giant recently launched the Galaxy Mega 5.8 and the Mega 6.3, stripping past the 5.5-inch phone size barrier. The company however, did so in response to several other companies brave enough to try even larger form factors. The Huawei Ascend Mate was one such device, shown off ahead of CES 2013. The device boasts of a 6.1-inch display and some impressive hardware under the hood. Do we have a device that can give the Galaxy Mega 5.8 a run for its money?

At a Glance
The Huawei Ascend mate is really big. At 6.1-inches the device feels big and difficult to navigate with one hand. It runs on Android 4.1 Jelly Bean and has Huawei’s Emotion UI overlaying it. Here is a quick look at the specifications of the Ascend mate when compared to the Mega 5.8.

From the specifications table it is clear that the Huawei Ascend Mate is better in all respects. It has a better display resolution along with a higher pixel density, better processor, more RAM and a much bigger battery. Does this translate into real world performance as well?

The front of the Ascend Mate has the 6.1-inch display and the front facing camera. Just like the Nexus experience, the back, home and multitasking buttons are a part of the display rather than being housed below it as capacitive buttons. The right of the device has the power button along with the volume rocker. The rear houses the camera and the LED flash. The bottom has the microUSB port and the left of the phablet has the microSD card slot. The top has the 3.5mm headphones jack and a slot for the SIM card.

The rear panel of the Ascend Mate is white plastic (there is a black version available in the market too) and is a fingerprint and scratch magnet. The rear of the phablet is sealed and you don’t have access to the humongous battery.

Overall, the design of the Ascend Mate is simple without throwing forth anything fancy. It has brick like form factor rather than a curvy design and this makes it look simple.

UI and Skin
Samsung has TouchWiz, HTC has the Sense and even LG has custom skins on devices such as the Optimus G and G Pro that we have started appreciating. The Ascend Mate has a UI overlaying the Android OS called the Emotion UI.

The first thing that you will notice about the UI is that you don’t have the standard apps and widgets listing page or drawer that we are used to seeing on all other Android devices. Instead, you have all the apps listed on the home screens, something we are used to seeing on iOS. You can also stack them into folders depending on your requirement.

The UI also comes preloaded with a bunch of themes and even though they don’t change the utility of the device, they do add a fresh look to the UI. You also get cloud support on the Ascend Mate, which gives you the ability to sync your contacts and bookmarks, along with backing up your messages and call logs.

The Ascend Mate also comes preloaded with a Huawei Care app. Through the app you can contact Huawei customer care by either call, message, mail or access a bunch of FAQ’s. You can also share your feedback via the app.

The UI of the device is different when compared to the ones on offer from HTC and Samsung and may take a bit of getting used to especially considering the fact that it doesn’t come with the traditional app/widget list. It doesn’t come preloaded with bloatware however.

Performance
Since the Ascend Mate is priced at Rs. 24,900, let us take a look and see how it compares to its biggest competitor, the Galaxy Mega 5.8

As you can see from the benchmark scores, the Ascend Mate does score in higher in all except for the 3DMark test, in which the Mega 5.8 scored more.

The response of the Ascend Mate’s touchscreen is very good. The interface is quite responsive as well. Browsing the Internet, playing games, and generally anything to do with navigating the touchscreen is a good experience. The 6.1-inch display has a 241ppi pixel density, enough to make content look crisp.

The keyboard on the Ascend Mate is really good. You have the standard QWERTY keyboard but the real-estate space is great for typing. The display of the Ascend Mate has good viewing angles and is crisp.

All the games we tried on the Huawei Ascend Mate worked quite well. Games like Dead Trigger, Angry Birds Star Wars, Subway Surfers, Words With Friends and more ran quite smoothly and it was a treat playing the games considering the size of the display.

The calling capability of the Ascend Mate is good too. The audio is crisp at both ends, and the device is quite loud at full volume. Whether holding a 6-inch device to your ear is comfortable or not is a decision we leave to you. We found it a bit big to work as a phone.

The camera performance of the Ascend Mate is average. Images clicked in well-lit conditions are good enough to upload on social networking websites but if you view the image in full size, there is loss of detail. In low-lit conditions, not only is there loss of detail but the images appear noisy too.

Natively the Ascend Mate recognised all the video formats we threw at it. Preloaded, the device has two players – Movie and TPlayer. The TPlayer gives you the ability to pop the video out and watch it in a small window on the display you can use the device for anything else at the same time such as web browsing, messaging, etc. The display is brilliant to consume multimedia content on. It was a treat watching movies on it.

In terms of its battery life, the Ascend Mate has enough juice to get through the day. The large display and the large battery go hand in hand. In our continuous video playback test, the smartphone lasted for a little under 7 hours with the brightness on full as well as the volume. The Wi-Fi too was on.

Bottom Line
For Rs. 24,900 you get some pretty good specifications under the hood of the Ascend Mate and a really large display. For the same price you get some really great performing devices such as the Nexus 4, Samsung Galaxy S3 and more. What the Ascend Mate brings to the table is a really large display that’s good for running multimedia content and playing games but considering the size of the device we wish the resolution were higher than 720p. The camera on the phone is lacklustre. You can consider picking up the Mate if a large display is mandatory for you, and you don’t mind using a new UI. It’s a better option than the Galaxy Mega 5.8 as well, if you are looking for performance and not familiarity.