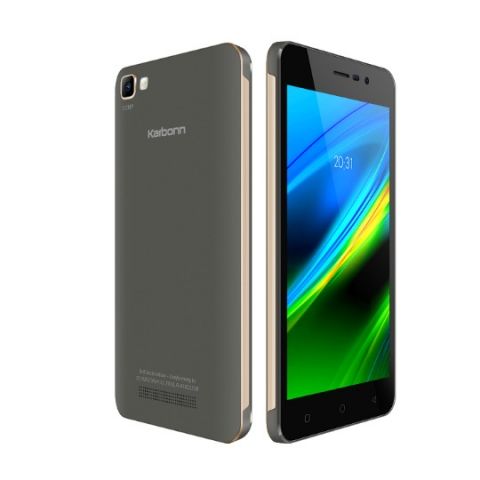 Karbonn has launched the K9 Smart which supports upto 12 Indian languages. The smartphone’s keyboard also allows users to choose from up to 21 Indian languages. The device also gives users the option to access Newshunt and CricBuzz in six languages. Other specifications of the phone include a 5-inch screen, 1.2GHz quad-core processor and a 2300mAh battery. The device comes with 8GB of storage which can be expanded by up to 32GB. There is a 3.2MP rear camera at the back with a 1.3MP front camera. The device is priced at Rs. 3,990.

In its efforts to fulfill the vision of bringing the benefits of mobile telephony to the masses,Karbonn- the leading homegrown Smartphone player, launches K9 Smart which allows users to access the entire Smartphone in the users’ own local language. Karbonn K9 Smart is an extension of the K9 phone series, which is one of the longest running mobile phone model in the Indian market.

K9 Smart offers users the option to navigate the device in upto 12 Indian languages offering non English speakers the comfort of accessing the device in their first language thereby lowering adoption barriers. The Smartphone also allows users the freedom to express themselves to their loved ones in their native language by giving users the flexibility to choose from 21 Indian languages for typing input. Additionally, K9 Smart users can easily search and even add contacts in upto 11 Indian languages.  With Smartphones becoming an important source of news and information, K9 Smart gives users the option to access news and magazines on Newshunt and enjoy cricket commentary, score and live updates on CricBuzz in six languages of their choice dissolving language barriers to information access.  Users can also access various utility and social apps like Google Maps, YouTube, Facebook and Whatsapp in various Indian languages for Indian users.

Commenting on the launch, Mr. Shashin Devsare, Executive Director, Karbonn Mobiles said, “With the launch of K9 Smart, we aim to dissolve the language barrier which is one of the major impediments inhibiting Smartphone adoption amongst non English speaking population. As per IAMAI, the local language user base grew 47% and touched 127 million in June. The growing consumption of local language content on mobile phones is a clear indicator of the need for vernacularising the Smartphone ecosystem for bridging the gaping digital divide. With K9 Smart launch we aim to bridge this divide by offering Indian users an affordable Smartphone device which offers access in their native language for ease of use thereby encouraging adoption.”

K9 Smart offers numerous features for a distinguished smartphone experience disrupting the budget smartphone market. The best in class specification includes- 12.4 cm (5’) screen for an immersive viewing experience, 1.2 GHz quad core processor that makes the device a true multi-tasker along with 2300 mAh Li-ion battery that has the energy to last all day while travelling, listening to music or surfing on internet. The smartphone is packed with an internal memory of 8GB which is expandable to 32 GB that efficiently manages your processing workload. It offers a 3.2 MP rear camera with flash and a 1.3MP front camera. The device has dual SIM support with faster 3G connectivity with bundling offers from leading network operators in the offing.