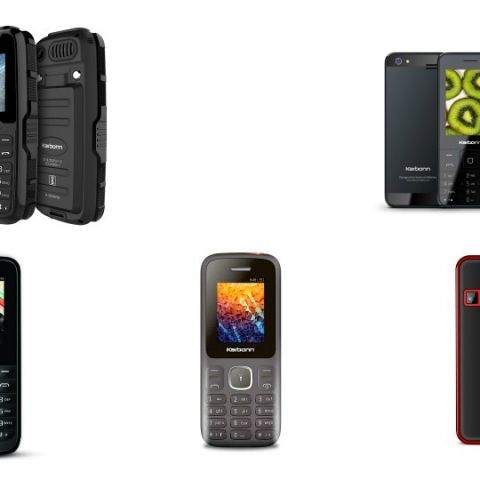 The first quarter of 2017 has been full of surprises for the mobile handset industry. While we gear up for a dynamic and new landscape of the telecom industry, it’s time we take a lookback at how the scenario of the mobile handset economy is. Recent reports suggest that even in the changing times of digitization, a significant part of the mobile handset population comprises of feature phone users. While Karbonn has always worked towards simplifying technology for its users, it has also focused on bringing the best of features to its users in the right price bracket. With superior specifications like powerful battery, expandable memory, compatible camera, bright screens the feature phone range of Karbonn still manages to fulfill the aspirational quotient of its customers.

Take a look at these co-existing handset wonders below:

Targeted at the 24*7 user the K5000 Baahubali is a strong and power packed offering. As the name suggests K5000 Mahaabali comes with a huge and long lasting battery of 5000mAh battery backup. The Karbonn K5000 will keep you talking and texting for days before it needs a recharge. With a bright screen and a large 4.5 cm (1.8”) TFT display, Karbonn K5000 Mahaabalii brings out vivid and clear images and videos. The device comes with a 1.3MPdigital camera which enables you to capture precious moments to cherish forever. With an expandable 32GB memory, you can also stay entertained as you listen music and watch videos or can play several exciting embedded games. Unlike the other phones, K5000 Mahaabali also works as a power bank and helps you to charge your other devices. Karbonn K5000 Mahabaali is definitely a vigorous offering that also has an auto call recorder, all of this and more is packed in a device at the price of INR 1290.

One of the Karbonn’s most powerful and commendable phones is the Karbonn K46LED. Equipped 4.5cm (1.8) screen, the device gives a platform to experience big bright viewing like never before. Along with the amazing digital camera and music/video player, K46 LED also has a long lasting battery of 1700mAh and 16GB expandable memory that allows us to store whatever we want. Another unique feature of K46 is the in-built Mobile Tracker that keeps the track of your lost phone from anywhere. K46 is a dual sim device that has the power of internet with GPRS and WAP support.

Karbonn K9 is one of the most simplistic yet bestselling offering by Karbonn. It is one of the highest selling feature phone in India and has maintained that for almost half a decade now. K 9 Jumbo is a dual-SIM phone with 2MP camera and video recording feature. It has GPRS, Bluetooth, and USB connectivity. The phone has shortcut keys for camera, music player, and FM radio. Other features and dual LED torch that spreads light wherever you go. The device also has mobile tracker, that keeps the track of your lost phone and a 16GB expandable memory. With so much packed in a device, this one is surely a winner at INR 1200.

Karbonn Kphone 1 is a sleek and stylish dual-SIM phone. It has 6.1 cm (2.4) IPS LCD for super sharp viewing. The phone has Bluetooth for file transfer & GPRS and WAP for Internet access. Its 1.3MP camera comes with flash light for clear image capturing and sharp video shooting which is a great option for the picture lovers. The device also has a  music player,and a FM radio that keep you entertained anytime you want. It has a long lasting and powerful  1400 mAh battery backup. Mobile Tracker, privacy protection, and 8GB expandable memory are some of the other exciting and attractive features of this device. At the price of INR 1290, K Phone1 is an attractive pick for your feature phone needs.

Karbonn K105s is a dual-SIM phone that gives you the best of both the world as you carry your work and personal number. With 4.5 cm (1.8) QVGA display, K 105s has digital camera with flash to capture clear pictures and videos that helps you to keep memories with you forever. For connectivity, the phone has Bluetooth and WAP network. It also has music player and FM radio to entertain users. Some of the other enthusiastic features include: Li-Ion 800 mAh battery, torch, auto call recording, and 16GB expansion capacity. With so much packed in a device, there is also an added advantage of 22 regional language support. The K105s not only supports reading but provides an input support, making it a perfect pick at the price of INR 800.