Huawei overtakes OPPO to become the number one smartphone company in China in Q1 2017: IDC

As per IDC, the launch of Huawei’s P10, P10 Plus smartphones and a strong momentum for the Honor brand helped the company reclaim the top position from Oppo in China.

China’s Huawei is now the top smartphone company in the country, reclaiming the spot from Oppo this quarter. As per an IDC report, the launch of its latest flagships, the P10 and P10 Plus, along with a strong demand for Honor devices, pushed Huawei to the top spot in Q1 2017.

According to International Data Corporation (IDC), 104.1 million smartphones were shipped to China in 2017Q1. This was a mere 1% year-on-year (YoY) growth, in part the result of high inventory from the previous quarter. 2017Q1 was also relatively quiet aside from a few product launches like Huawei’s new P10, P10 Plus, and Honor V9. This, along with strong momentum for the Honor brand, helped Huawei reclaim the top position from OPPO.

“Despite a soft first quarter in China, the second quarter should pick up sequentially given not only JD.com’s June promotions, but also activity around a number of new products like vivo with its Y53, Xiaomi with its Mi 6, Meizu with its E2, and Gionee with its M6S Plus,” says Tay Xiaohan, Senior Market Analyst with IDC Asia/Pacific's Client Devices team.

"Apple has been seeing double-digit YoY declines for the fifth quarter in a row, but we believe that Chinese consumers are holding out for the launch of Apple's 10-year anniversary iPhone at the end of the year, and this will help Apple to see a rebound in the China smartphone market," according to Tay.

These are some key highlights in the China smartphone market in 2017Q1 and some points on what we can expect to see for the coming year:

"Having one star flagship model that is marketed successfully is sufficient to significantly propel a company's shipments in the right direction. This can be aptly exemplified in OPPO's key flagship R9s which comprised close to half of its overall shipments. In light of the foregoing, whilst the Chinese companies can continue to innovate and try to outshine one another in the coming year, they can also consider focusing their resources on one or two key models with clear key messages than to stretch themselves thin and try to diversify their portfolio," ends Tay. 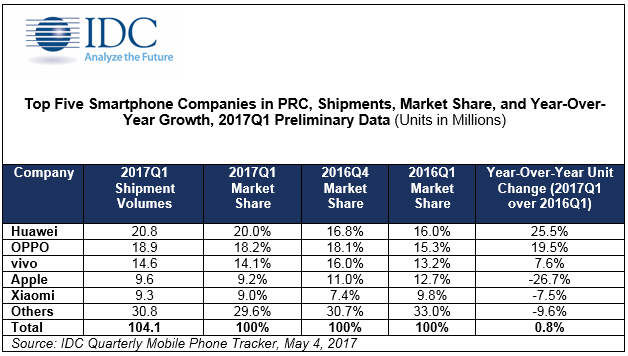