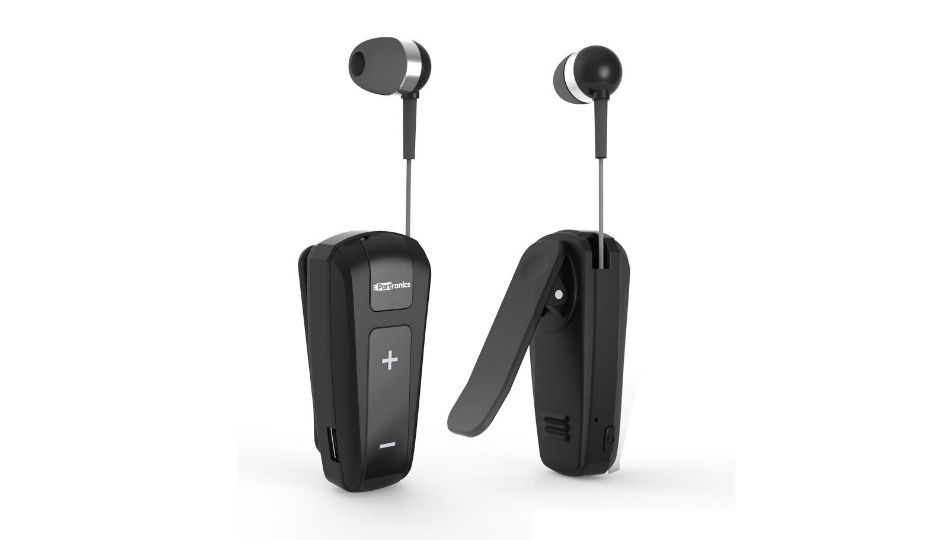 Portronics, which has a large portfolio of mobile accessories and audio devices has announced its new Bluetooth earphones called the Harmonics Klip. The main feature about these earphones is that these have retractable earphone cables. Further, earphones support CVC noise cancellation technology, which Portronics claims offers better clarity in calls and music. These also have a built-in microphone and can be used to receive or make voice calls. The device offers 6 hours of talk time or 7 hours of continuous music on full charge. The operating range is claimed to be 10 metres from source. The Portronics Harmonics Klip are priced at Rs.1,999 and will be available via both offline and online stores.

Portronics, a prominent leader in the innovative and portable digital product market, has launched Harmonics Klip, a dual-purpose music and calling enabled retractable Bluetooth earphone with CVC noise cancellation technology to let you enjoy the freedom of Bluetooth with clarity of calls and superior quality music.

Harmonics Klip Bluetooth earphones allow you to enjoy music or take phone calls while on the move.

For safety reasons, you need to remain aware of the nearby surroundings and not be completely cut-off, like in case when you go on a morning walk or while simply walk on the footpath or while riding a vehicle. In such out-door situations it would be safe to sacrifice stereo music and listen to surrounding sounds while listening to music.

Also, for people who keep two phones, Harmonics Klip can pair with both of them simultaneously, allowing calls from anyone. You can also control volume levels quickly and easily on the bluetooth headset without doing it on your phone.

Harmonics Klip comes with Bluetooth V4.1 connectivity and a retractable earbud. It allows you to simply pull out and insert the tethered earbud into your ear when answering a call or listening to music. Once the call is over or you are done with the listening to music, you just have to press a button on the headset to auto retract the earbud. This prevents the ear fatigue and gives you the neat looks with no hanging wires on your clothes.

Harmonics Klip, the Bluetooth wireless earphones come with a voice calling feature for easy dial-out by just pressing the button and speaking the name. Clip the Bluetooth headset to your clothing or wear it around your neck using the included lanyard. This universal Bluetooth headset is compatible with all Bluetooth enabled phones including Android, Smart phones and iPhones. Harmonics Klip has a talk time of 6 hours and music time of 7 hours with 270 hours of standby time. It comes with rechargeable Li-Polymer battery.

The sleek black colored looks of Harmonics Klip gives you the professional touch and contributes to your style quotient. The operating range of the Harmonics Klip is about 10 meters. It is very lightweight with the weight of 30g only.

Pricing and Availability:
Harmonics Klip is priced at a very attractive price-point of INR 1999/- and is available both online and offline stores.