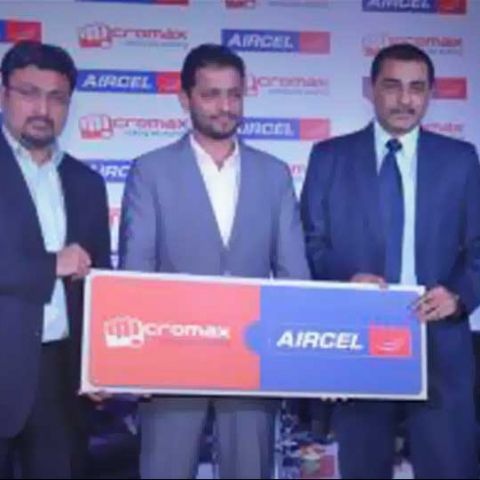 Aircel and Micromax have entered into a strategic partnership under which the operator will offer discounted bundled voice/ data plans and free content worth Rs. 10,000 with the new Micromax devices including dongles, feature phones (Internet-enabled) and smartphones. The two companies will also share each other's Channel and Retail Network, Sales Resources and roll out an integrated devices sales activation programme. With the latest partnership, Aircel and Micromax are aiming to acquire 4-5 lakh device users per month.

While addressing the media at the launch event in Delhi, Mr. Anupam Vasudev, Aircel's Chief Marketing Officer, highlighted the forthcoming 'data revolution' in the country. He also asserted that the voice segment had reached a saturation point.

“India is at the cusp of a data revolution and device tie-ups will strengthen the telecom ecosystem in the country, which is critical to drive data penetration. According to a recent study, by the year 2020, mobile internet users are set to grow 4 - 5 times and smartphone penetration is set to increase 5 times to 50% in India,” he added.

“Affordability in devices will give a rise to data proliferation which will be the main revenue generator for both telecom operators as well as handset manufacturers in the near future. Aircel recognizes the importance of smartphone devices to drive data usage. In line with that, it is our focus to get into partnerships with leading smartphone device manufacturers in an endeavour to bring to our customers exciting bundled products. In this exclusive partnership with Micromax, we will share their robust channel and retail network to deliver innovative and best value for money products and services.”

Mr. Vikas Jain, co-founder, Micromax, said, “At Micromax, we have always believed in democratizing technologies for masses by bringing alive affordable innovations through our product and service offerings. We are very happy to partner with Aircel, as this partnership will be an excellent amalgamation of Aircel’s innovative offerings in the market place and superior hardware capabilities of Micromax, which will enable millions of consumers in India to enjoy seamless connectivity through affordable call rates, data usage and internet TV on Micromax devices.”

According to Mr. Anupam Vasudev, Aircel is unlikely to cut down 3G tariffs further. “Tariffs are already pretty down. Slashing 3G data rates further will add on the pressure on the telecom operators.”

Referring to Airtel's plans to expand its 4G network, he added, “We're aware about the development...It'll be too early to comment on 4G's prospects in India. However, we'll address that market very soon."

“We know the market is growing towards data consumption... the markets for 2G, 3G and 4G will continue to co-exist like in the western markets.”