Christened the Xolo Play T1000 the smartphone will be powered by the NVIDIA Tegra 3 processor clocked at 1.5GHz. 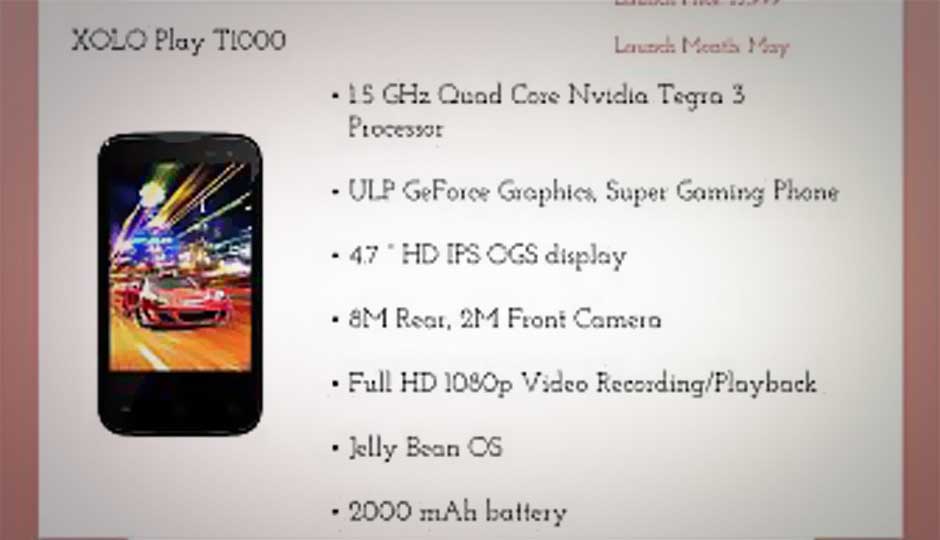 Information about the next Xolo smartphone has leaked online. Christened the Xolo Play T1000 the smartphone will be powered by the NVIDIA Tegra 3 processor clocked at 1.5GHz. The device houses a 4.7-inch IPS display with a resolution of 1280x720 pixels. It also houses the ULP GeForce GPU along with 1GB of RAM. The rear will house an 8MP shooter and the front will have a 2MP camera for video calling. The T1000 will sport 8GB built-in storage expandable via a microSD card. It will run on Android 4.1 Jelly Bean and will be powered by a 2000mAh battery.

If true, the Xolo Play T1000 will be the first budget device that we will see running the Tegre 3 chipset. Device such as the HTC One, Nexus 7 and many more are powered by the Tegra 3 chipset. So it is sufficient to say that the hardware is pretty impressive.

The Xolo Play T1000 will be priced at Rs. 15,999 and is expected to be a direct competitor to the Micromax A116 Canvas HD, which was the first budget quad-core smartphone to hit store shelves in India. The device ran on the MediaTek MT6589. After the Canvas HD a large number of manufacturers started using the MT6589 chipset in their smartphone. Some of these devices include the Xolo Q800, WickedLeak Wammy Titan II, Jiayu G4, Intex Aqua Wonder Quadcore and more. Xolo recently announced the Xolo Q700, which also boasts of the MediaTek MT6589 processor.