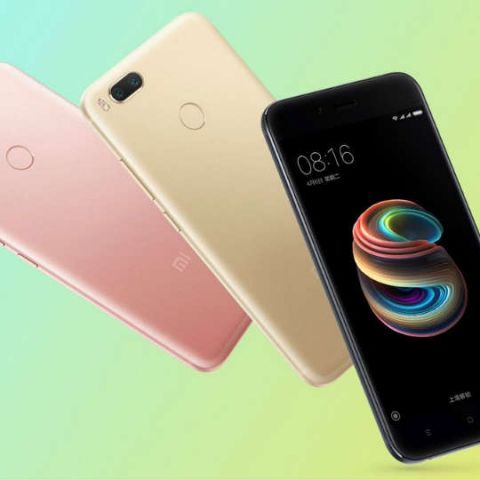 Xiaomi's next smartphone in India will feature a dual rear camera setup. Xiaomi India VP and Managing Director, Manu Jain tweeted early in the day that the company's first dual camera phone in India will launch next month. However, he didn't share details of the exact model his company plans to launch here.

The Xiaomi Mi 6 and Mi 5X are the two smartphones in company's lineup that features a dual rear camera setup. The Mi 6 is the flagship smartphone announced in April while the Mi 5X running MIUI 9 was introduced recently in China. The Mi 6 is one of the most anticipated smartphones in the country but Xiaomi recently confirmed that it plans to launch only one flagship device in India. Xiaomi has launched Redmi Note 4, Redmi 4A, Redmi 4 and Mi Max 2 smartphones in India so far and these are targeted mainly at consumers looking for an entry-level or a mid-range smartphone. Most Mi fans are talking about the Mi 6 in reply to Jain's tweet but there are also replies requesting the company to launch Mi 5X here.

Can't wait for you guys to check out Xiaomi's first dual-camera phone in India! Coming next month! ☺️

Can you guess which one? pic.twitter.com/UhtFphm0GT

Xiaomi Mi 6 is the flagship smartphone from the company and will be priced around the OnePlus 5 if it gets launched anytime soon. The smartphone features a 5.15-inch Full HD display and is powered by Qualcomm's Snapdragon 835 chipset. The smartphone offers 6GB RAM and option for either 64GB or 128GB internal storage. The Mi 6 sports a dual 12MP rear camera setup with one wide-angle lens and another telephoto lens with capable of 2x optical zoom. It features an 8MP front camera with facial recognition and beautification features. The smartphone is backed by a 3350mAh battery and will be getting MIUI 9 update in the next few days.

The Xiaomi Mi 5X, on the other hand, is a mid-range smartphone featuring dual rear camera setup similar to the one found on Mi 6. It sports dual 12MP rear cameras with one wide-angle lens and another telephoto lens capable of 2x optical zoom and capturing portrait mode pictures. The handset features a 5.5-inch Full HD display and Snapdragon 625 processor, also powering the company's Redmi Note 4 and Mi Max 2 smartphones. It offers 4GB RAM, 64GB expandable storage and is backed by a 3080mAh battery.

Xiaomi Mi 5X is priced at 1,499 Yuan (approximately Rs 14,990) in China and should debut in India in the under Rs 20,000 smartphone category. According to Counterpoint, the Redmi Note 4 and Redmi 4 from Xiaomi are the best-selling smartphones in India and with the Mi 5X, the company can further strengthen its dominant position.