Xiaomi Redmi Note ready for India, may launch this month

In an earlier interview with Hugo Barra, he had told us that the Redmi Note was expected by the end of October, or early November.

Xiaomi Redmi Note ready for India, may launch this month

It’s been a while since Xiaomi launched a product in India. But company VP Hugo Barra just posted on Facebook that the Redmi Note is finally ready for India. The device has been pending in India for a while now and Barra had last told us during an interaction that it would come by early November. While his Facebook post talked about the device selling out in under 40 seconds in Indonesia, Barra added a check-in from Bangalore and mentioned that the device is coming to India next. Xiaomi India Head Manu Jain also said that the company is aiming for end of this month or early next month for the device. 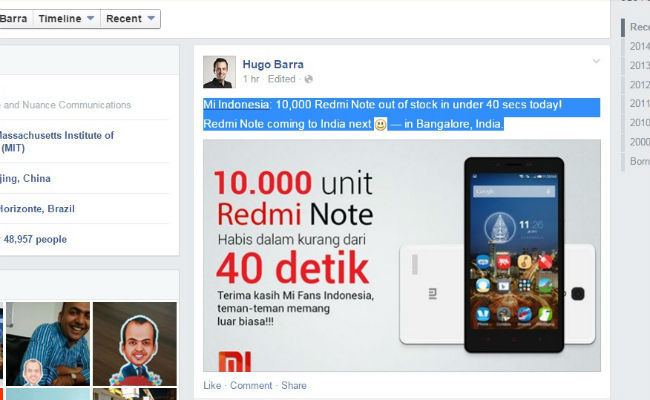 The Xiaomi Redmi Note boasts a MediaTek MT6592 octa-core SoC and has a 13 MP and 5 MP rear and front cameras respectively. The device also has a 8 GB of internal storage, which is expandable to 32 GB using a micro-SD card. Xiaomi had first announced the device for India at the launch of the Xiaomi Mi3, back in July. At the time, Xiaomi had announced a Rs. 9,999 price tag for the device, but going by its other launches, you can expect a Rs. 8,999 price tag for it.

The company has recently increased its shipment size in the country, selling 1,00,000 Redmi 1S units in some of its recent flash sales. The last Redmi 1S flash sale saw 65,000 units being sold on Flipkart. Xiaomi has also discontinued its flagship Xiaomi Mi3 smartphone in the country. The device has been replaced on the production lines by the Xiaomi Mi4.