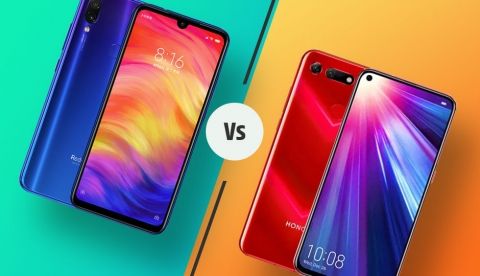 Since their inception, smartphones have gone from strength to strength. What seemed impossible is now a reality. We’re talking borderless displays, in-display fingerprint scanners, sturdy builds and long battery life. The best part is that these features aren't restricted to flagship devices and are now quite common. 2019 is promising more new features like 48MP sensors, 3D Time of Flight cameras, foldable screens and what not.

To examine the current state of smartphone innovation, we took two cutting edge phones announced within a month of each other — The Redmi Note 7 and the Honor View 20. Both phones are equipped with features that are new and promising, but more importantly, both are expected to come to India soon. The Honor View 20’s global launch is set for January 22 while in India, it will be announced on January 29. The Redmi Note 7, on the other hand, should be released in the first quarter as well, as recent reports indicate. The Redmi Note 7 will be a mid-ranger, which in all probability, will not be priced above Rs 20,000. The Honor View 20 is in the leagues of OnePlus, in the high-end segment. Ideally, that should make a whole of lot of difference in the spec-sheet, but they're a lot similar than you think. Take a look yourself — Both the Xiaomi Redmi Note 7 and the Honor View 20 rock the glass-sandwich design which essentially means both phones have an aluminium frame sandwiched between two sheets of glass. The rear glass panel renders the swanky colour treatment seen on both phones, while the front is the display. However, as seen in multiple videos, the Redmi Note 7 seems to be really strong. It has Corning Gorilla Glass 5 on both sides and we have seen videos of the phone surviving drops from the stairs and even when used as a skateboard. The Honor View 20, on the other hand, does not advertise what protective glass is used. The Honor View 20, however, has a laser-etched V pattern on the back that makes the phone look stunning. The Redmi Note 7 is also offered in gradient colours, but the Honor View 20 pushes the design envelope further by incorporating the punch-hole camera up front. The View 20 has the front camera drilled into a 4.7mm hole on the top left corner of the display making the panel look nearly bezel-less. The Redmi Note 7, on the other hand, has the waterdrop notch in the middle, much like the OnePlus 6T.

Both phones retain the 3.5mm headphone jack (much to our relief) and feature USB-C ports with support for fast charging. The phones are also identically slim at 8.1mm and weighs almost the same as well.

Another area where both phones push the envelope further is the camera. Both the Redmi Note 7 and the Honor View 20 sport large 48MP sensors on the back. The one on Xiaomi’s mid-ranger is made by Samsung, while Honor is relying on a Sony IMX 586 sensor. While a high megapixel count hardly matters, the 48MP sensor is poised to make it big this year. The cameras on the Redmi Note 7 and the Honor View 20 pack 0.8um pixels, arranged in a 1/2-inch sensor. More than the number of pixels, it’s the sensor size that will matter more. The cameras are expected to have better zooming capabilities and detail retention, and more importantly, improve low-light photos by binning four pixels into one. The Redmi Note 7 stops short at offering a 5MP depth sensor alongside the primary camera. The Honor View 20, however, takes things further up a notch by incorporating a 3D ToF sensor as well. The new sensor, developed by Sony again, is meant to be used for faster focusing, real-time depth mapping to allow for motion gaming and more.

On the front, the Redmi Note 7’s mid-range stature is more evident thanks to a 13MP selfie camera, while the View 20 has a 24MP sensor incorporated in the punch-hole drilled into the display. However, neither phones have EIS or OIS present.

Under the hood, the Redmi Note 7 proves that it remains a mid-ranger with a Qualcomm Snapdragon 660 SoC, and this is where things get a little murky. The 14-bit Spectra 160 ISP on the Snapdragon 660 can only support a single sensor up to 25 megapixels. How Xiaomi managed to incorporate a 48MP sensor is still a mystery. The Redmi Note 7 is offered in 3GB/4GB/6GB of RAM and 32GB/64GB of storage. The View 20, like its predecessor, uses the latest flagship Kirin 980 SoC based on a 7nm manufacturing process. It is offered in 6GB/8GB RAM variants with 128GB/256GB onboard storage. The Honor View 20 also has a dedicated dual-core NPU that handles the AI-centric tasks like scene recognition and  battery management. The Redmi Note 7 relies on the Snapdragon 660's AI Engine that distributes AI tasks between the CPU, GPU and the DSP. In benchmark scores, the Kirin 980 has appeared much higher than the Snapdragon 660. The Redmi Note 7 also has a dedicated slot to expand memory via a microSD card, while the View 20 doesn’t.

The phones run on the latest Android 9 Pie, although on custom builds. The Redmi Note 7 runs on MIUI 10 while the Honor View 20 uses the new MagicUI 2.

While both the Redmi Note 7 and the Honor View 20 are future-forward devices incorporating a lot of firsts for the smartphone industry, the key difference lies in the pricing of the phones. Both phones are currently available in the Chinese market and there is a big difference in the premium both charge. The Redmi Note 7 is currently the most affordable 48MP phone to buy retailing at 999 Yuan or roughly Rs 10,000, while the Honor View 20 starts from 3499 Yuan, roughly Rs 35,000. Clearly, Xiaomi is aiming for the affordable segment with its high-tech offering, while Honor is more interested in the high-end market. Either way, both phones seem to be at the cutting-edge of consumer tech, and based on what the spec-sheets suggest, both will be hard to beat in the coming months.