Xiaomi Redmi Note 5, Note 5 Pro and Mi TV to go on sale tomorrow: Price, Specs and everything else you need to know before buying

The two smartphones will go on sale at 12 noon, whereas the Mi LED Smart TV 4 will be available for purchase starting 2 PM tomorrow. 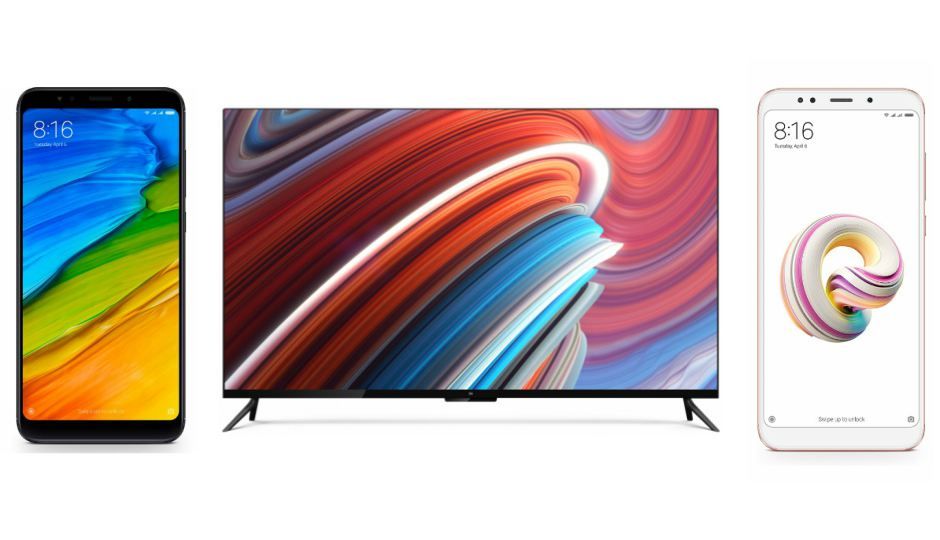 Xiaomi Redmi Note 5, Note 5 Pro and Mi TV to go on sale tomorrow: Price, Specs and everything else you need to know before buying

The Xiaomi Redmi Note 5 and Redmi Note 5 Pro will go on sale tomorrow at 12PM and the Mi LED Smart TV 4 will be available for purchase starting 2PM. Xiaomi announced the three devices on February 14 and they can be bought from Flipkart, mi.com and Mi Homes. There are also some launch offers with the two smartphones and Xiaomi is offering some freebies with the Mi Smart LED TV 4 as well. Let’s take a look at what each device has to offer.

The Redmi Note 5 Pro (review) also comes in two memory variants. Its 4GB RAM/32GB ROM model is priced at Rs 13,999, whereas the 6GB RAM/64GB internal storage will be available for purchase priced at Rs 16,999.

Xiaomi’s first Television, the Mi LED Smart TV 4, will be available for purchase priced at Rs 39,999. Buyers will also get a free subscription to Hungama Play and Sony Liv for three months, Mi IR Cable along with free onsite installation.

As for launch offers, Xiaomi is offering an ultra slim case free with both the Redmi Note 5 and Note 5 Pro smartphones. As a partner offer, Reliance Jio is offering cashback and double data for its subscribers with the smartphones. Under the Jio #GiveMe5 Offer, the telcos prime subscribers will get an instant Rs 2,200 cashback if they activate the newly purchased smartphones by performing a recharge of Rs 198 or Rs 299. It should be noted that the cashback will be credited in the form of 44 vouchers (each worth Rs 50) into the user’s MyJio account and can only be redeemed one at a time and only while recharging with Rs 198 or Rs 299 prepaid plan, via the MyJio App only.

Redmi Note 5/Note 5 Pro users will also be able to avail a double data offer, after activating the smartphones. They will receive one double data voucher for 3 subsequent recharges when they top-up with plans priced at Rs 198 and above. First five lakh Mi and Redmi device users can also avail a free subscription of Hungama Music for three months.

The Redmi Note 5 Pro sports a 5.99-inch FHD+ 18:9 display with 2160 x 1080p resolution and the first smartphone in India to be powered by the Qualcomm’s Snapdragon 636 processor. It is equipped with dual 12MP + 5MP rear cameras with f/2.2 aperture lens and f/2.0 aperture lens respectively. The handset comes with a 20MP front-facing camera with Selfie-light and Beautify 4.0 feature as well.

The Redmi Note 5 is powered by the Qualcomm Snapdragon 625 SoC with Adreno 506 GPU, similar to its predecessor. It sports a 5.99-inch FHD+ screen with an 18:9 display aspect ratio. The smartphone comes with a single 12MP rear camera with f/2.2 aperture lens and an LED flash. On the front, it’s equipped with a 5MP sensor, which is capable of recording Full HD videos and comes with a Beautify 3.0 feature for selfies along with an LED flash.

Both the devices share some common features too, they run on MIUI 9 on top of Android Nougat and come with a rear placed fingerprint scanner. They are powered by a 4000mAh battery, which we noted in our review that both the smartphones last well over a day and the Note 5 Pro can also manage to squeeze up to two days of battery life, owing to the efficient SoC.

The Mi LED Smart TV 4 features an ultra-slim design and allows for viewing 4K HDR content on a budget. It is equipped with a 55-inch 4K HDR display and runs on Xiaomi’s PatchWall OS. The OS is a fork of Android, but doesn’t come with Google Play Store.

The TV measures 4.9mm and offers the option of either being wall mounted or placed on two legs-stands. It runs on PatchWall OS with 2GB RAM and 8GB internal storage. In terms of connectivity, the Mi LED Smart TV 4 supports Dual-band Bluetooth 4.0, Wi-Fi, 3 HDMI ports (1 ARC), 1 USB 2.0 port and 1 USB 3.0 port.

The device is powered by an Amlogic 64 bit Quad-core CPU with Mali T830 Graphics and boasts of Dolby+DTS Cinema audio quality as well. Aimed to appeal to Indian consumers, the Smart TV will offer localised content in 15 Indic languages and feature a smarter set-top box experience. You can read our first impressions of the Mi LED Smart TV 4 here.