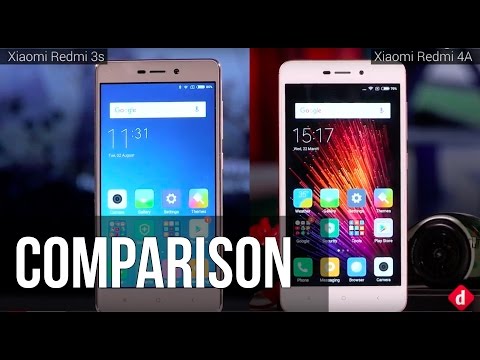 Xiaomi has launched its much anticipated “Desh Ka Smartphone”, which is none other than the rumoured Redmi 5A. As we already know, the Redmi 5A will be a Flipkart exclusive smartphone. It will be available for purchase starting December 7 from the online retailer, Mi.com, Mi Homes and other partner offline channels.

The Xiaomi Redmi 5A is priced at Rs 5,999 for the 2GB RAM/16GB storage variant, but Xiaomi is offering a discount of Rs 1,000 on the smartphone for their first 5 Million customers. This is Xiaomi's attempt at giving back a total of Rs 500 Crores to the Mi India community and fans. This effectively brings down the price of the 2GB RAM variant of the Xiaomi Redmi 5A(₹ 5899 at flipkart) from Rs 5,999 to Rs 4,999. The 3GB RAM/32GB storage variant of the Redmi 5A is priced at Rs 6,999.

Flipkart is also offering some lucrative launch offers with the device. The online retailer has currently listed the 2GB RAM/16GB ROM variant of the smartphone which will go on sale starting December 7. Buyers will get a no cost-EMI option starting at Rs 243 with the device. Axis bank Buzz Credit card customers get 5 percent off on purchasing the smartphone and Flipkart is offering 10% off on next Fashion purchase for first-time mobile phone buyers. Mi.com has also listed a Jio offer with both variants of the smartphone. Users will get Rs 1,000 cashback on buying the smartphone with a Jio connection, however, users will have to recharge it with Jio's Rs 199 recharge consecutively for 12 months. The recharge offers free national calls with unlimited data (with daily 1GB FUP) and SMS with a validity of 28 days. Customers will receive the cashback in the form of 10 vouchers worth Rs 1,000 in the denomination of Rs 100 at the end of 12 months. Cashback vouchers will be credited to the customer's account and will be visible under My Vouchers in the MyJio app. The vouchers can be redeemed, one at a time, against recharges of Rs 309 and above and against Rs 201 and above data add-ons before 30th Nov 2019. The offer is valid on phones sold and first recharge between December 5, 2017 to November 30, 2018. The Rs 199 plan will be available for the first 12 months only.

The Redmi 5A sports a Metallic matte finish and features dual pyrolytic graphite sheets at the back, which the company claims keeps the smartphone 1 degree cooler. It features a 5-inch HD display with a 1280 x 720p resolution with "reading mode" that Xiaomi says automatically controls blue light emission levels. The smartphone is backed by a 3000mAh battery and Xiaomi claims it can last up to 8 days on standby and up to 7 hours of video playback. For its processing needs, the Redmi 5A houses a quad-core Snapdragon 425 chipset clocked at 1.4 GHz. 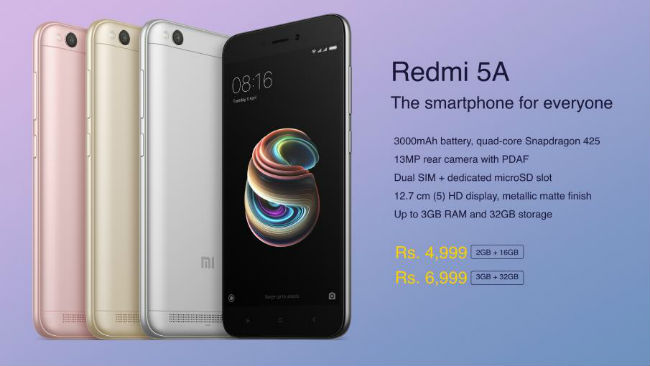 In the camera department, the Redmi 5A comes with a 13MP primary camera with an LED flash, PDAF support and a f/2.2 aperture lens. It features a 5MP front-facing camera with f/2.0 aperture. The rear camera is capable of recording 1080p videos at 30fps and 720p videos at 30fps. The smartphone runs on MIUI9 on top of Android 7.1 Nougat. For connectivity, the Redmi 5A supports Wi-Fi, Bluetooth 4.1, GPS and 4G LTE. The onboard storage can be further expanded up to 128GB using a microSD card. The Redmi 5A is also a dual-SIM device with a separate third slot for a microSD card. The device has been launched in Elegant Gold, Rose Gold and Dark Grey colour models.

Xiaomi announced that the Redmi 5A is designed for the country and supporting the Make In India initiative, is made in their factory in Sri city, Andhra Pradesh. The smartphone will also come with a custom charger that supports voltage of up to 380v for tackling sudden power surge or drops.