The smartphone will go on sale via Amazon, Mi.com, Mi Homes and offline retailers from March 20. Jio is also offering a Rs 2200 instant cashback and extra data with the device. 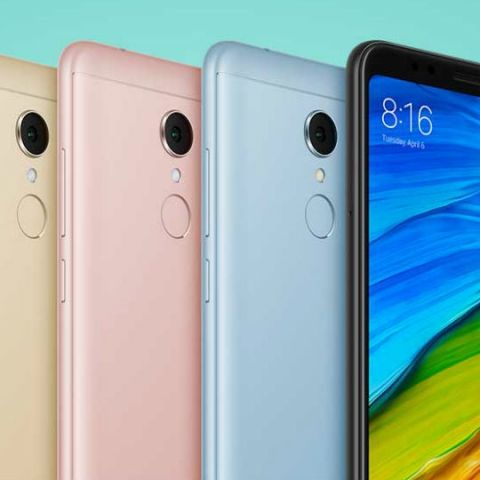 Xiaomi has launched the Redmi 5 as its much teased 'Compact Powerhouse' smartphone. The company says that the device is 11 percent slimmer than its predecessor, the Redmi 4. It will be available in India in three variants, the 2GB RAM/16 ROM variant at Rs 7,999, the 3GB RAM/32GB storage option will cost Rs 8,999 and the 4GB RAM/64GB storage model is priced at Rs 10,999.
The Redmi 5 will go up for sale at 12PM on March 20 via Amazon, Mi.com, Mi Home stores, and subsequently it will be available via offline retail partners as well. As part of the launch offers, the company is giving out an case free with the smartphone and Jio subscribers will receive Rs 2200 instant cashback along with 100GB of additional data. Further, buyers will also receive a five percent cashback when purchasing the device using an SBI credit card on Amazon and Mi.com. The company is also offering 90 percent off (up to Rs 400) for users on the purchase of their first Kindle eBook.
The device will be available in Black, Gold, Lake Blue, and Rose Gold colour variants. Same as the Redmi 5A, Xiaomi says that the Redmi 5 features dual pyrolytic sheet technology, which helps in heat dissipation, thus optimising the smartphone for Indian environmental conditions.
The Redmi 5 features a metal unibody design with reinforced corners and an 18:9 display aspect ratio. It sports a 5.7-inch HD+ display with a resolution of 1440x720 pixels and is powered by an octa-core Qualcomm Snapdragon 450 SoC coupled with Adreno 506 GPU.
In the camera department, the smartphone is equipped with a 12MP rear camera, which sports a 1.25-micron pixels, PDAF, HDR, f/2.2 aperture, and an LED flash. On the front is a 5MP sensor which is complemented with an LED light, which Xiaomi says is the first for a Redmi series handset, and the company says that it can capture “enhanced” portrait shots with the Beautify 3.0 feature.
The Redmi 5 is powered by a 3300mAh battery, which boasts of delivering one day of battery life under normal usage, 9 hours while gaming and 10 hours on video playback. It comes with a rear placed fingerprint sensor and runs on MIUI 9, which is based upon Android 7.1 Nougat. In terms of connectivity, it supports GPS, A-GPS, WiFi, Bluetooth 4.2, a 3.5mm headphone jack, and comes with a micro-USB port for charging.