The Delhi High Court has granted Xiaomi a reprieve, allowing Snapdragon-powered devices to be sold till February 5. 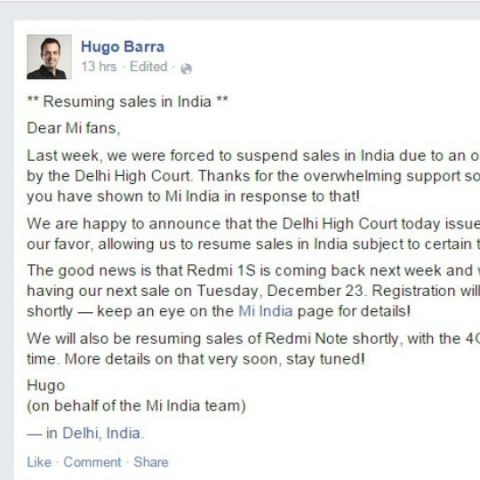 The Xiaomi Redmi 1S will go on sale again from December 21 in India. In addition, the company will also start selling the Redmi Note 4G soon. Following the reprieve granted by the Delhi High Court, company VP Hugo Barra announced the update on Facebook. Further, in a statement to Digit, the company explained that the Delhi High Court’s order says that the matter will be taken up again on February 5. This is the reason why Xiaomi can safely sell its Snapdragon powered devices till then.

The High Court’s ruling works in Xiaomi’s favour, as most of the company’s devices run on Snapdragon SoCs. In fact, the Redmi Note 3G was the only MediaTek-powered smartphone that Xiaomi had launched in India till now. The company’s next flagship, the Xiaomi Mi4, is also powered by a Snapdragon 801 processor.

Interestingly, Flipkart’s involvement in the case was stated earlier, but it's not clear to what extent the e-retailer is party to the issue. Barra posted that more details on the Redmi Note 4G will be available soon. At the launch, the company had announced a partnership with Airtel, to sell the devices in brick and mortar Airtel Retail stores and also on Flipkart. The registrations for the Redmi 1S will also be beginning soon and details for the same will be available on the Mi India Facebook page soon.

The Xiaomi Redmi Note 4G runs on the Qualcomm Snapdragon 400 quad-core SoC and has 4G capability.

We’re working on gathering more information and will keep you updated as it comes.