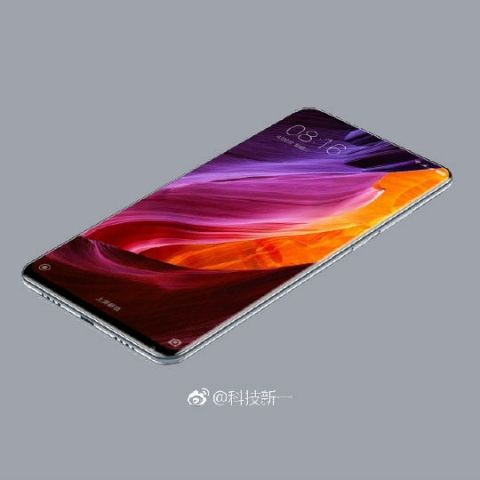 Xiaomi Mi Mix 2, the successor to Chinese smartphone maker's bezel-less display smartphone, has leaked in the form of a prototype device. Xiaomi CEO Lei Jun had previously confirmed that Mi Mix 2 will also be designed by French designer Philippe Starck.

Xiaomi's original Mi Mix was an interesting piece of design and engineering with essentially no bezels. While flagship smartphones of this year feature smaller top and bottom bezel, the Mi Mix lacked bezels on three sides surrounding the display. This year, the company seems to be stepping up their game further by removing the bottom bezel found on Mi Mix.

The prototype image shared on Weibo shows the front of the device, which is almost entirely covered by the display. The Mi Mix 2 also seems to use a piezoelectric module as there is no sign of a speaker grille up top of the device. Interestingly, the smartphone seems to skip on the front camera setup altogether. The smartphone looks thinner than its predecessor with a metal chassis and rounded corners.

In terms of specifications, the Xiaomi Mi Mix 2 is expected to sport an AMOLED display from Samsung and is rumoured to be powered by Qualcomm's Snapdragon 835 platform coupled with 6GB RAM. The Mi Mix 2 is expected to offer a 19MP primary camera. The handset is also likely to house a beefy 4500mAh battery and become available at a retail price of 4,999 Yuan (around Rs 50,000).

Samsung and LG have already trimmed the bezels on their flagship devices and Apple is expected to follow suit with its tenth anniversary edition iPhone. However, Xiaomi could have the most interesting design of the pack if this prototype turns out to the final device.