Xiaomi has started teasing the launch of a new smartphone with 6GB RAM and 3D glass body. The handset is believed to be the Mi 6 Plus sporting a larger display and bigger battery than the regular Mi 6 model. 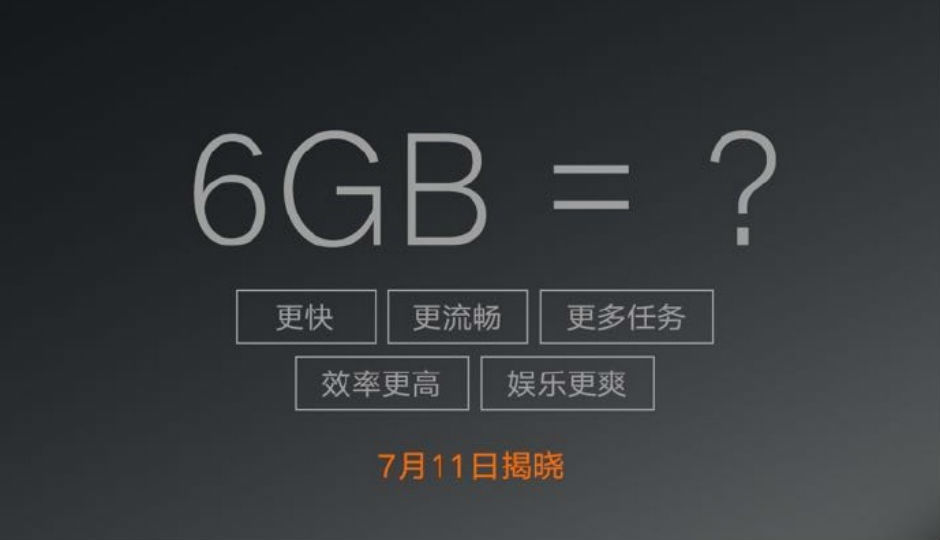 Xiaomi recently announced that it shipped 23.16 million smartphones in the second quarter of this year. The company saw its shipments increase 70 percent quarter-on-quarter and is planning to add more Mi Home retail stores to continue the uptick in sales. In a letter addressed to employees, Xiaomi CEO Lei Jun added that new restructuring has helped drive sales and is now targeting 100 million smartphone shipments in 2017.

Xiaomi has had a rather interesting start to 2017 with the launch of Mi Mix white ceramic version at CES followed by Redmi Note 4X, Redmi 4X, flagship Mi 6 and the phablet Mi Max 2. Now it is preparing to add one more smartphone to that lineup. Xiaomi has started teasing the launch of a new smartphone with 6GB RAM, which could debut as Mi 6 Plus.

GizmoChina reports that Xiaomi has posted a teaser of a new smartphone launch on July 11 on Weibo, China's microblogging platform. Xiaomi already sells Mi 6 with 6GB RAM so it is not clear how this variant will be different from existing model. However, use of 6GB RAM will help Xiaomi compete against the similar offering from smartphone vendors like Huawei, Oppo, Vivo and OnePlus.

Xiaomi has also released a teaser video highlighting other specifications including Snapdragon 800 series chipset (mostly Snapdragon 835), UFS storage and DDR4 RAM. The video also claims that the handset has a 3D glass body and since it's Mi 6 Plus, the display will be larger than the 5.15-inch found on regular Mi 6. The smartphone is backed by a beefy 4000mAh battery and there is a 22MP rear camera capable of recording 4K video. Other details include support for full 4G Netcom, a USB Type-C port, an IR blaster and NFC. The specifications suggest the handset will be a flagship addition to its existing lineup. The device is believed to be Mi 6 Plus considering the larger display and bigger battery.