The Xiaomi Mi 11 is slated to be the first phone to be powered by the Qualcomm Snapdragon 888 processor that was unveiled earlier this month. The company has confirmed the launch of the Mi 11 on December 28 in China. It was previously speculated that the Mi 11 series could launch before the end of 2020 and rightly so, the launch event has been scheduled for December 28 at 7:30 PM local time (5 PM IST).

Xiaomi has shared a poster on Weibo that reveals the launch date and time for the upcoming Mi 11 series. Since we are just days away from the launch of the first flagship powered by the Snapdragon 888, we can expect Xiaomi to start teasing some key features about the upcoming lineup. The Mi 11 is rumoured to be joined by the Mi 11 Pro at launch. 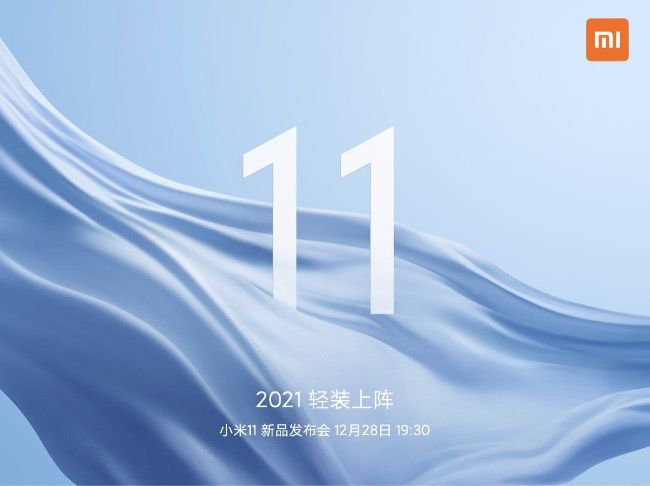 During the announcement for the Qualcomm Snapdragon 888, many smartphone makers revealed their plans to be the first to put out a phone powered by the latest processor in the market. Some of these companies include Xiaomi, Realme, Oppo and more. Now it seems like Xiaomi wants to be the first to claim the title for announcing the world’s first Snapdragon 888-powered smartphone, something that it reserves for the beginning of the year.

Having said that, we are hearing rumours that a lot of companies may announce their new flagship phones powered by the new processor earlier than expected. As per a previous report, OnePlus may launch the OnePlus 9 series sometime in mid-March 2021.

The Mi 11 could have a 48MP ultra-wide-angle camera but overall will likely have trimmed down features. The Mi 11 Pro is rumoured to feature a QHD+ display that supports 120Hz refresh rate. It could have a 50MP primary camera along with a 12MP telephoto camera but there is no information on the other cameras.

The Mi 10 Pro is Xiaomi’s flagship smartphone for 2020, but it did not launch in India. It has a premium finish with a large display that curves on the sides along with minimal bezels on top and bottom. The Mi 11 Pro has quad cameras on the back with a 108MP primary camera, two telephoto cameras and a 20MP ultra-wide-angle camera. It is equipped with a 4,500mAh battery that supports 50W fast charging and 30W fast wireless charging.

We expect to know more about the Mi 11 and Mi 11 Pro as we near the official launch date on December 28.