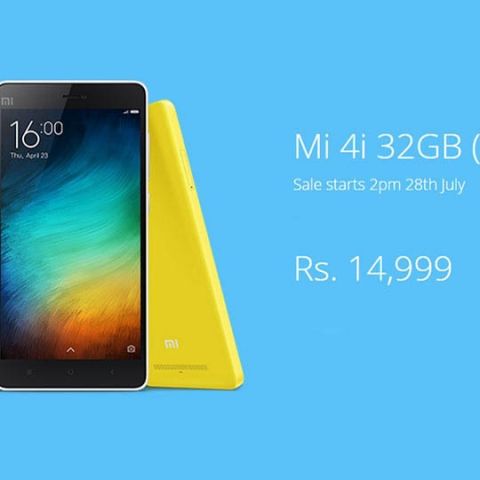 Xiaomi is launching a 32GB version of its Mi 4i. Registrations for the Mi 4i has already started at 10am today, and the device will go on sale from July 28. Only the Dark Grey back colour will be available with 32GB of internal storage, and is priced at Rs. 14,999, available only via Xiaomi's official website. Additionally, Xiaomi is also providing a Mi coupon worth Rs. 500, against purchase of the Mi 4i 16GB. This offer will be valid only for today.

Xiaomi has also launched the Mi Store app on Google Play Store, giving a one-stop platform to purchase other Mi products on the go. Hugo Barra, Vice-President of Xiaomi International recently posted on Facebook, stating Xiaomi would 'love' to bring its Mi Water Purifier to India soon. Xiaomi has also launched the Mi TV 2S - a 48" television with a 4K panel, which is just 9.9mm thick. With the addition of the Mi Store and Xiaomi looking to bring more products from its stable to India, this will add convenience to Xiaomi users across the country.

The Mi 4i features a Snapdragon 615 octa-core processor clocked at 1.5GHz, along with 2GB of RAM and a 5" 1080p display. It also features a 13-megapixel primary camera with 1080p video recording, alongside a 5-megapixel front camera. It is powered by a 3120mAh battery pack. With the addition of a 32GB storage variant, Xiaomi has placed the Mi 4i at the same price point as the Mi 4 16GB, which itself was given a price cut about a month ago. In comparison to the Mi 4i, the Xiaomi Mi 4 features a Snapdragon 801 quad-core processor clocked at 2.5GHz, 3GB of RAM and the same display with Sunlight Display technology. The 13-megapixel sensor in the Mi 4 is capable of recording 2160p videos, and the front camera is specced at 8 megapixels. The Mi 4 is available in 16GB and 64GB internal storage variants, along with a host of different textured back covers.

Manu Jain, Head of Xiaomi India, stated via a press release, "The past one year has been a truly exciting journey and we are glad to have come so far in such a short time. We would like to thank all our Mi Fans and the partners who have given us immense love and support, and helped us strengthen our foothold in the Indian market. We will continue to bring more amazing products to India and aim to deliver the best value to both our fans and partners."