Xiaomi has sold over 2 million handsets in India during the July-September quarter. This is the highest sales ever for Xiaomi since entering India in 2014.

Xiaomi's India head Manu Jain tweeted that the company recorded 150 percent year-on-year growth. Xiaomi recently announced that its latest budget devices, Redmi 3S and Redmi 3S Prime, have contributed sales of over million handsets. Xiaomi has been constantly doing sales of over 1 million handsets per quarter but this is the first time, the number has reached over 2 million units.

Xiaomi made its debut in India in 2014 as an online-only brand via an exclusive tie-up with Flipkart. Since then, the Chinese smartphone maker has expanded its presence to other e-retail platforms like Amazon, Snapdeal, Paytm and TataCliQ. Xiaomi also recently introduced its first offline only smartphone, in order to catch up on the offline sales platform. 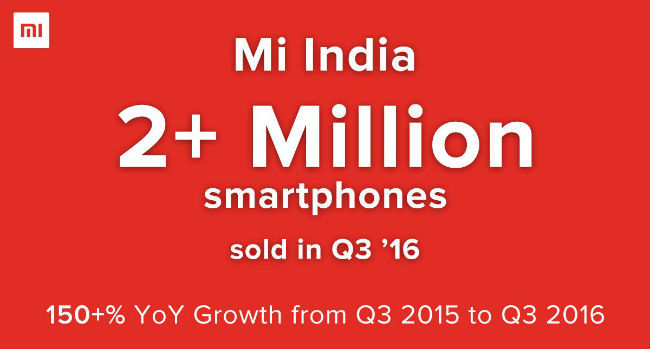 According to latest IDC numbers, Xiaomi is the fourth largest smartphone vendor with a market share of 7.4 percent. The company is poised to overtake home-grown smartphone maker, Micromax as the third largest brand. With the latest quarter sales, Xiaomi could announce its best yearly performance yet.

Since the launch of Redmi Note 3, Xiaomi has turned aggressive in India with expansion of its own retail site and exclusive offers. During the Diwali sale, Xiaomi managed to sell over 247,00 units via Mi.com before reaching sales of 1 million units in just 18 days. Xiaomi has also pushed the 'Make in India' bandwagon ahead with most phones getting assembled at Foxconn's Sri City factory in Andhra Pradesh.