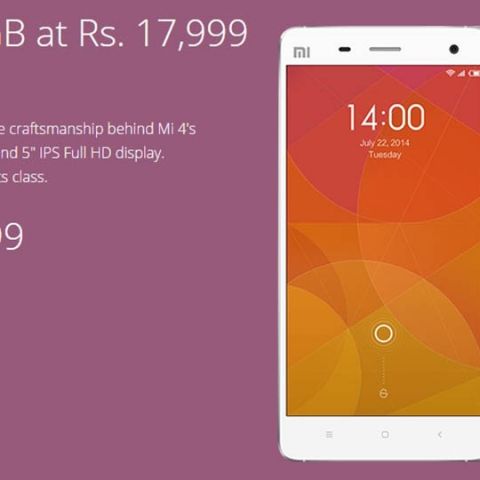 Keeping up with the series of discounts on smartphones, Xiaomi has announced a further price cut on its flagship smartphone for India. The Mi 4 64GB is now available for Rs. 17,999. Initially, Xiaomi had stated that the special discount, which forms a part of its first Mi Anniversary celebration in India, will be available for just one day, and had set a countdown timer on the Mi India website. As of now, the timer has disappeared from the site, which might mean that the discount will be a permanent one.

Xiaomi has been celebrating its Mi Anniversary in India by announcing new products in India and providing discounts. Started on July 22, it will continue for a week. As of now, Xiaomi has announced a 32GB version of the Mi 4i priced at Rs. 14,999, and introduced two headphones - the Mi in-ear and the larger, over-the-ear Mi Headphones. Vice President of Xiaomi Global, Hugo Barra, has also stated that the Mi Smart Water Purifier might be on its way to India soon.

The price drop can alternatively be seen as part of Xiaomi’s preparations to make way for the rumoured Mi 5 and Mi 5 Plus. Although no launch date has been given, the rumoured flagship smartphone can be expected in a few months’ time, given that its prime rivals OnePlus is launching its next generation flagship, the OnePlus 2, on July 28 in India.