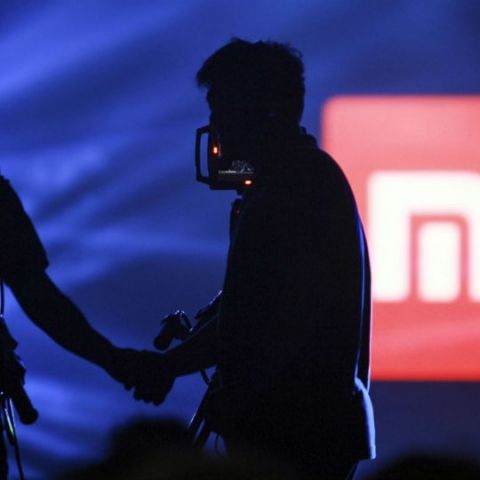 The company made a post on social media denying the allegations.

Chinese manufacturer Xiaomi has denied allegations about spying on its users. The company had yesterday been called out for sending personal and private user data to servers in China without taking their permission. Xiaomi has put a list of questions and answers on its Mi India page on Facebook to quell user anxiety. The same has also been posted by company vice president Hugo Barra on his Google+ page. 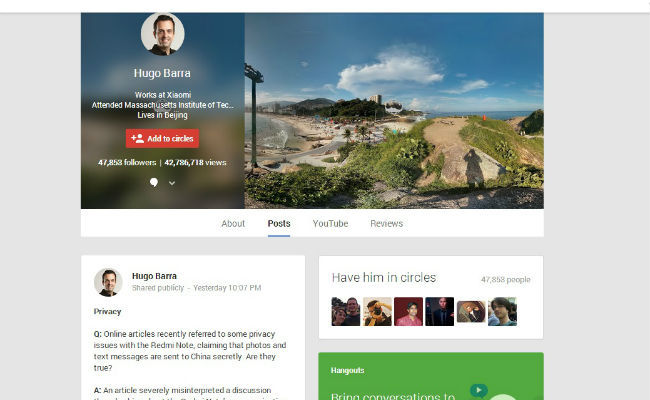 According to Xiaomi, the MiUI contacts servers in China to request “public data for preset messages in the Messaging app and OTA update notifications, i.e. all non-personal data that does not infringe on user privacy”. This means that the company is only taking data from the servers to bring updates for MiUI and to add messages, like jokes, wishes etc. to the user's smartphone. The company also wrote that it is serious about user privacy, explaining that such “unlawful activity would be greatly detrimental to a company's global expansion efforts”. Xiaomi has only recently started selling in countries other than China, with its most recent launch in India, with the Xiaomi Mi3. Its other smarthphones, the Redmi Note and Redmi 1S are also going to be launched in India in the coming months. 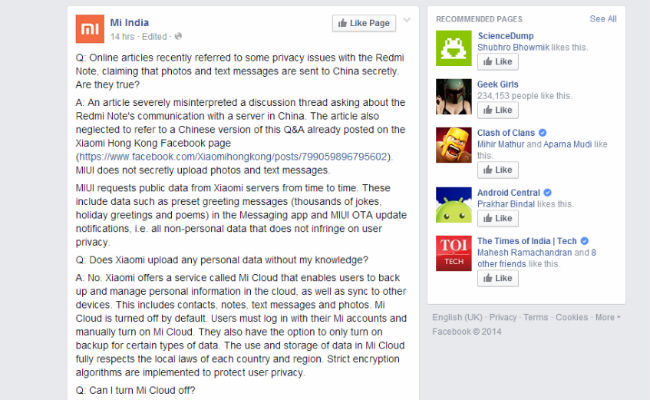 The allegations against Xiaomi had been brought forth by a user, who posted a screenshot showing that his Redmi Note smartphone was connecting with an IP Address in China. The server corresponding to the IP Address was later found (by a PhoneArena user) to be owned by a company with relations to the Chinese government. The company has otherwise received rave reviews for its smartphones, which offer high-end specifications at low end prices, but many users have also commented on the possibility of Chinese manufacturers spying on its users for the Chinese government.

The Q&A posted by Xiaomi has been attached below,

Q: Online articles recently referred to some privacy issues with the Redmi Note, claiming that photos and text messages are sent to China secretly. Are they true?

A: An article severely misinterpreted a discussion thread asking about the Redmi Note's communication with a server in China. The article also neglected to refer to a Chinese version of this Q&A already posted on the Xiaomi Hong Kong Facebook page (https://www.facebook.com/Xiaomihongkong/posts/799059896795602). MIUI does not secretly upload photos and text messages.

MIUI requests public data from Xiaomi servers from time to time. These include data such as preset greeting messages (thousands of jokes, holiday greetings and poems) in the Messaging app and MIUI OTA update notifications, i.e. all non-personal data that does not infringe on user privacy.

Q: Does Xiaomi upload any personal data without my knowledge?

A: No. Xiaomi offers a service called Mi Cloud that enables users to back up and manage personal information in the cloud, as well as sync to other devices. This includes contacts, notes, text messages and photos. Mi Cloud is turned off by default. Users must log in with their Mi accounts and manually turn on Mi Cloud. They also have the option to only turn on backup for certain types of data. The use and storage of data in Mi Cloud fully respects the local laws of each country and region. Strict encryption algorithms are implemented to protect user privacy.

Q: Can I turn Mi Cloud off?

A: Yes. Just go to Settings > Mi Cloud to turn it off. If you would like to use a cloud back up service from another provider, there are options from Google, Dropbox and many others.

Q: Why should I believe you?

A: Xiaomi is serious about user privacy and takes all possible steps to ensure our Internet services adhere to our privacy policy. We do not upload any personal information and data without the permission of users. In a globalized economy, Chinese manufacturers' handsets are selling well internationally, and many international brands are similarly successful in China – any unlawful activity would be greatly detrimental to a company's global expansion efforts.