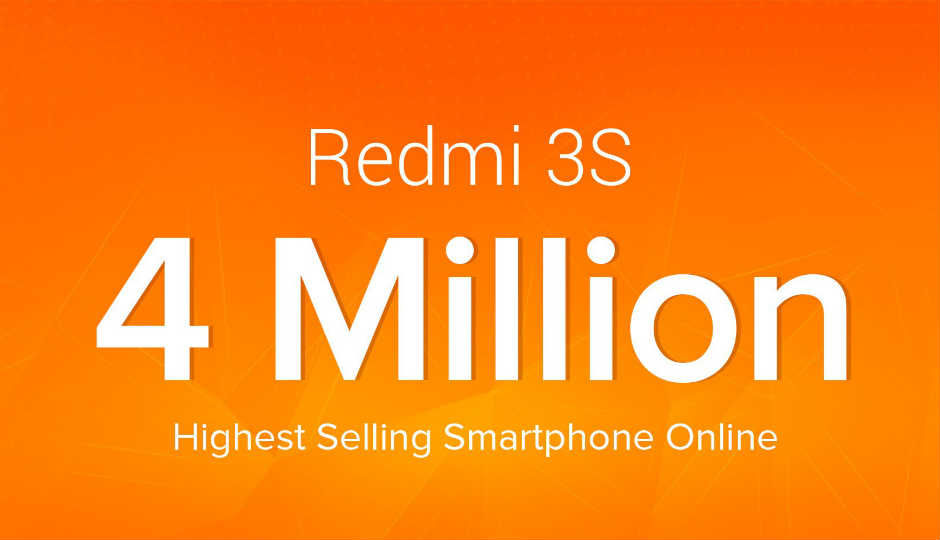 Xiaomi claims to have sold over 4 million units of its Redmi 3S smartphone in India. Xiaomi's announcement comes just a day ahead of the official introduction of the successor to Redmi 3S, the Redmi 4. The company had announced Redmi 3S and Redmi 3S Prime in August last year and then followed up with offline only Redmi 3S Plus in October. It should be noted that the sales figure is inclusive of all the variants launched in the country.

Xiaomi had launched Redmi 3S and Redmi 3S Prime exclusively on Flipkart at Rs 6,999 and Rs 8,999. In February, Xiaomi announced that the sales of Redmi 3S surpassed 3 million units in less than six months after its launch.

According to Canalys, Xiaomi is the second largest smartphone brand in India with a market share of 14 percent. The research firm says the Chinese smartphone maker shipped nearly 4 million smartphones in the first quarter of 2017. Xiaomi India claims its smartphone business has grown four times in the past year alone. Manu Jain, Xiaomi India MD adds the Redmi 3S is now the highest selling smartphone in the online retail segment. At the launch of Redmi 4A in March, the company had confirmed its plans to launch the Redmi 3S successor soon. The Redmi 4 is expected to arrive in two variants varying in terms of display resolution, processor and storage capacity.