Xiaomi has finally unveiled the White Ceramic version of Mi Mix, the smartphone with screen-to-body ratio of 91.3 percent. Xiaomi had announced the Mi Mix in October 2016 in black ceramic, and now there is an option to get the device in white, too.

At CES 2017, Xiaomi has announced Mi TV 4, Mi Router HD and Mi Mix in an effort to expand its offerings beyond the Asian markets. The Xiaomi Mi Mix is designed by French designer Phillippe Starck, and offers a 6.4-inch Quad HD display. It is powered by the Qualcomm Snapdragon 821 processor, and comes in two variants - 4GB RAM, 128GB storage and 6GB RAM, 256GB storage.

The Xiaomi Mi Mix sports a 16MP rear camera with f/2.0 aperture, phase detection autofocus and electronic image stabilisation. It also offers a 5MP front camera but is placed at the lower end of the display in order to cut down on bezels. The White Ceramic version, which the company calls Pearl White, will only be available in China. The company has not revealed availability just yet, but it is expected to ship some time later this year. 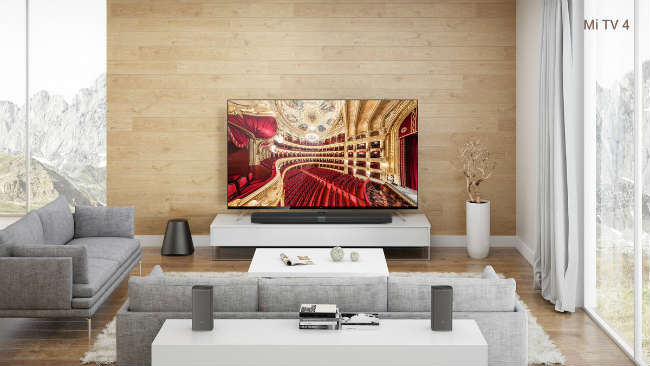 Xiaomi is also introducing the Mi TV 4, the company's flagship TV offering that practically has no bezels and is just 4.98mm in thickness. Like LG and Sony, Xiaomi is also adopting modular designs with televisions. The modular design allows the display panel to be separate from its electronic components, and helps achieve slimmer designs.

The Mi TV 4 comes with 'Patch Wall', an AI system that offers predictive content recommendation based on user behaviour. It also comes with a soundbar that connects to the TV via a single cable. The soundbar also gives access to all I/O ports. The Xiaomi Mi TV 4 will be available in 65-inch variant in China for under $2,000.

Expanding its lineup of smart device offerings, Xiaomi is also introducing the Mi Router HD capable of offering upto 2600 Mbps download speeds. The router supports MU-MIMO standard for delivering separate streams for communication with each device. The router also has 8TB storage for saving data. Xiaomi is not confirming the exact availability but the product should be available in China later this year.