Xiaomi had a major hardware event today in which the company announced a slew of new products marking its eighth-anniversary. New Xiaomi devices range from the flagship Mi 8 smartphones to refreshed fitness band, a new TV and a standalone VR headset. 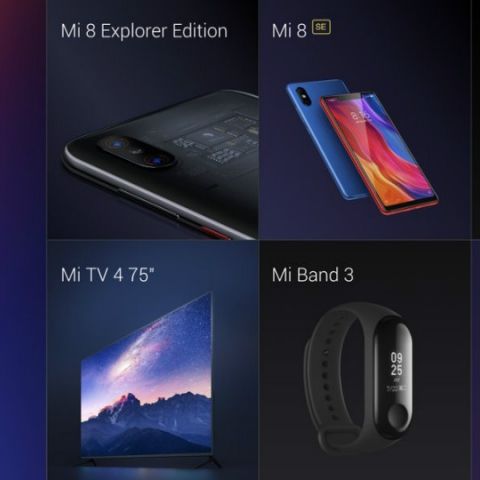 Just as teased, Xiaomi has launched its Mi 8 smartphone in China today, along with the Mi 8 Explorer Edition and a smaller Mi 8 SE model. Apart from the smartphones, MIUI 10 was also showcased today, along with the unveiling of the Mi Band 3, a 75-inch Mi LED TV 4 and the Mi VR Standalone headset. The Chinese manufacturer has gone all out for its 8th anniversary and as rumoured, the Mi 8 is Xiaomi’s first smartphone to feature a notch on the display. The Mi 8 Explorer edition can be considered the top-model with a transparent rear panel and a pressure-sensitive in-display fingerprint sensor. The Mi 8 SE is a smaller variant that is less powerful than the other two models, but is now the first device to be running on the Snapdragon 710 SoC. 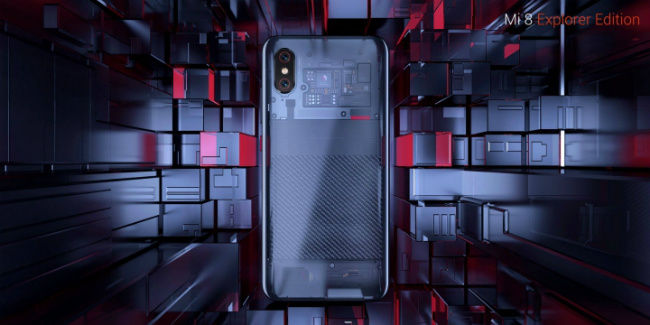 Both the Mi 8 and the Mi 8 Explorer edition smartphones feature a 6.21-inch Full HD+ AMOLED ‘notch’ display which is supplied by Samsung with 600 nits brightness with 60000:1 contrast ratio. They are powered by the Qualcomm Snapdragon 845 SoC, which the company says scored 301,472 on AnTuTu benchmarks. The devices run on Android 8.1 Oreo with MIUI 9 on top but the company has promised an MIUI 10 update soon. The dual-SIM smartphones feature a vertically stacked 12MP + 12MP dual rear camera that comes with 1.4µm pixel size, 4-axis OIS, dual-tone LED flash, AI portraits, AI scene detection and video editing support.

The notch on the front houses a 20MP camera sensor, a proximity sensor, an earpiece, infrared lighting and an infrared lens. The last two pieces of equipment enable a user to unlock the Mi 8 using its IR Face unlock feature and the Mi 8 Explorer Edition using 3D Face unlock. Xiaomi says that the Mi 8 Explorer Edition is the first Android smartphone to feature 3D Face Unlock technology. The Mi 8 also comes with a rear-mounted fingerprint sensor. The Mi 8 is backed by a 3400mAh whereas the Explorer Edition packs a 3000mAh battery. Both devices support QC 4+ fast charging and the Mi 8 also comes with Dual-frequency GPS. It is said to “eliminate interference from buildings and reduce signal delays, increasing the accuracy of navigating with Mi 8.”

The Mi 8 SE features a 5.8-inches Full HD+ 18.7: 9 display with a notch on top and it comes in two variants, one with 4GB RAM/64GB storage and another with or 6GB RAM with 64GB of internal memory. The smartphone features a 12MP+5MP dual camera setup on the rear, while on the front is a 20MP sensor. It is backed by a 3120 mAh battery and it will be available in Red, Blue, Gold and Black colour variants. 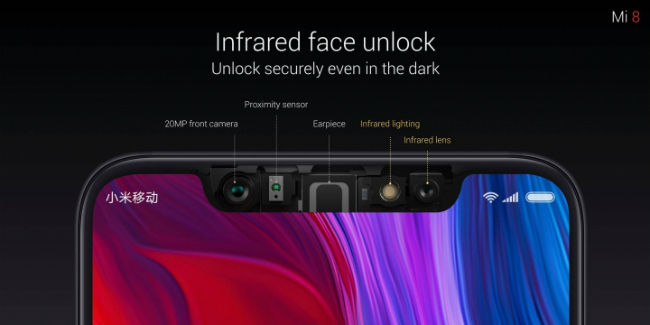 Except for the Mi 8 Explorer Edition's transparent rear panel, it has the same exterior design as the standard Mi 8. It also sports a pressure-sensitive in-display fingerprint sensor and is priced at 3699 yuan (Rs 39,000 approx). It comes in one variant of 8GB RAM, coupled with 256GB internal storage. Both versions of the Mi 8 will be available in China starting June 5. The Mi 8 SE’s base model starts at CNY 1,799 (Rs 19,000 approx) whereas its 6GB RAM variant costs Yuan 1999 (Rs 21,080 approx). 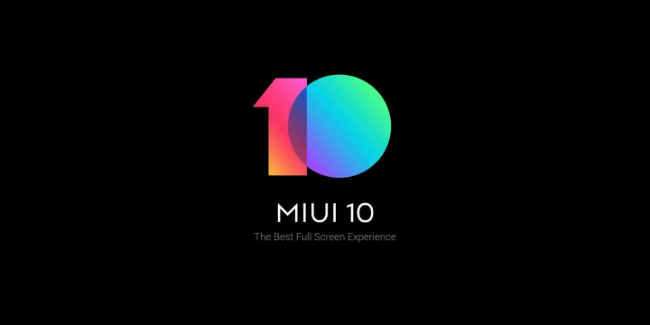 As AI seems to be the new gold, the newly launched MIUI 10 also makes extensive use of it. There is now a revamped recent screen that is said to maximise screen space, support full-screen display gesture, swipe to delete tasks and more. Additionally, the MIUI 10 itself helps the user to capture AI portraits with bokeh effects on both single and dual camera smartphones. Using Machine Learning, MIUI 10 is said to reduce load times to “zero” by studying and anticipating a user’s actions and it can also be used for controlling smart home devices. 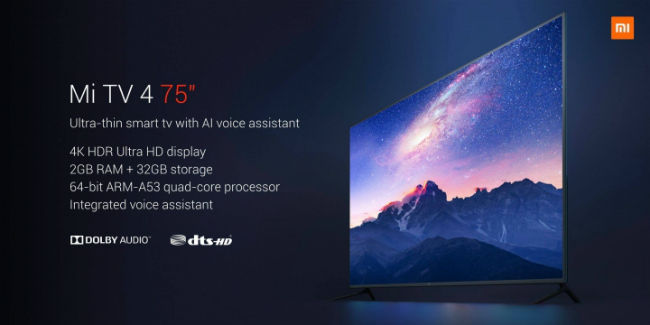 Xiaomi also launched its largest ever television, the Mi TV 4 which is a thin-bezel TV with built-in AI voice assistant. It features a 4K HDR Ultra HD display and is powered by the 64-bit ARM-A53 quad-core processor with 2GB RAM and 32GB internal storage. The Mi Band 3 has also been unveiled at the event and it features a 0.78-inch OLED capacitive display and one can view messages and answer calls via the device. It is also waterproof up to 50m, claims of a 20-day battery life and comes with motion tracking and health management features. 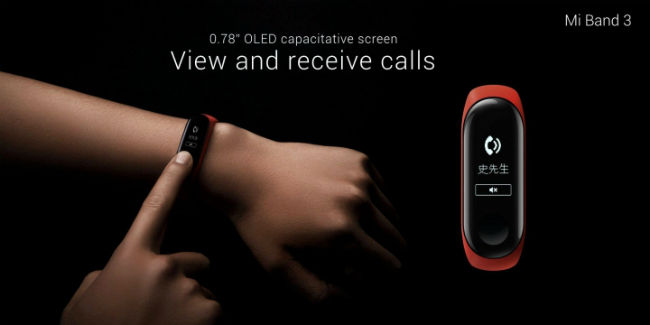 Further, Xiaomi announced the Mi VR Standalone headset that the company has developed in collaboration with Oculus. It is powered by the Snapdragon 821 platform, is wireless and comes with a 2k fast switch screen. There is an “intuitive” controller for the device and it is backed by a 2600mAh battery. The company announced that there are already over 1000 Oculus optimised games available for it. 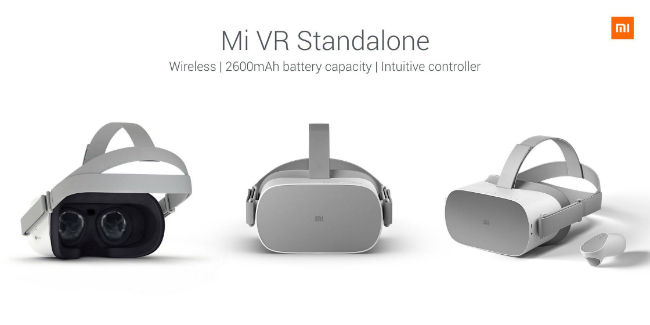