Windows 10 will arrive first on these Lumia smartphones 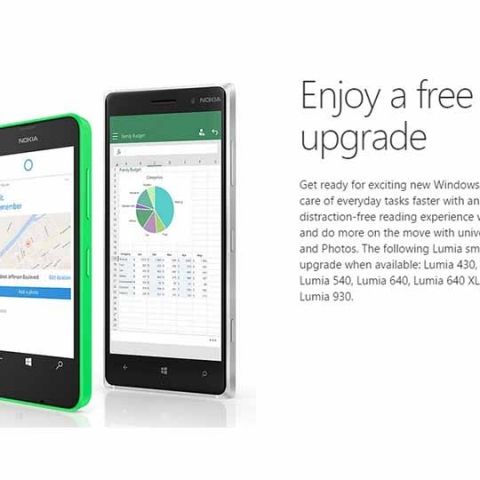 Windows 10 for phones is currently undergoing testing in Windows Insider circles. Although a date for its launch has not been given by Microsoft yet, it is widely expected to be unveiled in September or November. The new Windows 10 for phones has been seen to feature a refurbished Wallet, transparent tiles for the new Edge browser and Microsoft Store, and new live animations for the People tile. Support for 120fps slow motion videos have also been added to the camera.

Usage has been said to be refined further with newer builds, along with a more organised Action Centre. Recently, we spoke about five Lumia smartphones rumoured to be in the pipeline, out of which two of them, dubbed Lumia 950 and Lumia 950XL, have been slated for a September launch. Two more of them, dubbed Lumia 650 and Lumia 850, might have 2016 launches, while there is an additional rumour of an Intel-powered Lumia smartphone running Windows 10, presently in works.

It is possible that Microsoft will launch Windows 10 for phones with the next launch of Lumia smartphones, which may happen in September. As per reports, Microsoft is planning to hold a separate launch event in New York City for the new smartphones, and it may be here that we get to see Windows 10 presented as an upgrade to the above-mentioned existing smartphones.