Vivo X20, the next flagship smartphone from the Chinese smartphone maker will be officially announced on September 21. The launch details of the device were spotted on the company's Weibo account confirming that X20 will sport the new FullView display seen on recently launched Vivo V7+.

The Vivo X20 first appeared in the form of live images and it was also spotted on the official FIFA World Cup posters a few weeks back. TENAA, the Chinese telecom regulator recently certified the handset indicating the imminent launch. The highlight will be the new 5.8-inch FullView display with 2160 x 1080 pixel resolution and an aspect ratio of 18:9. The display is expected to be similar to the 18:9 Full Vision display seen on LG V30 and LG G6 smartphones.

The Vivo X20 is expected to offer better specifications than the Vivo V7+ with 6GB RAM and Qualcomm's Snapdragon 660 chipset. The smartphone will also offer 24MP selfie camera like the one found on V7+. The report suggest it will also feature a dual rear camera setup with 24MP primary sensor. 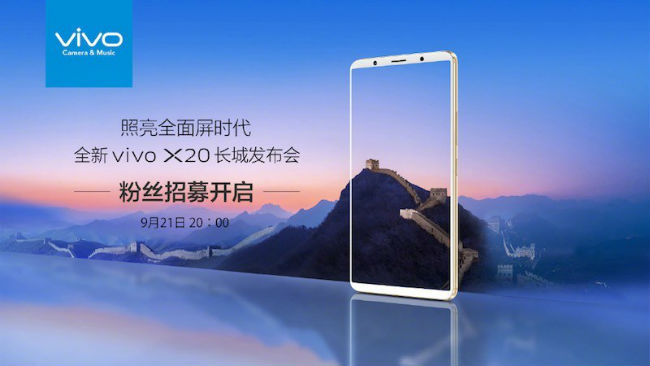 The Vivo X20 seems to sport a design similar to Oppo R11 and the OnePlus 5 with curved antenna lines and dual camera at the back. The smartphone is expected to debut alongside X20A but it is not clear how the two models will differ from each other.

Vivo has been one of the fastest growing smartphone brand with strong presence in offline segment. With X20 series, the company would be hoping to further strengthen its position in China and better compete with Oppo, Xiaomi and Huawei.