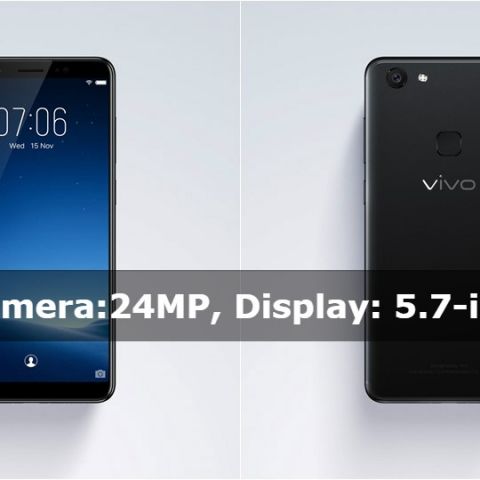 Vivo has unveiled a smaller version of its V7+ smartphone. Called the Vivo V7, it differs from its larger sibling mainly in three areas: display size, internal storage and battery capacity. The new device sports a smaller screen than its Plus sized variant, but still sports the 24MP selfie-camera smartphone. The handset also sports a FullView display will be officially launched in India on November 20.

As far as specifications are concerned, Vivo V7 sports a 5.7-inch HD+ IPS LCD display with a resolution of 1440 x 720 pixels and an aspect ratio of 18:9. Powering the device is same octa-core Snapdragon 450 chipset found in the Vivo V7+. The smartphone comes with 4GB RAM and 32GB internal storage as opposed to 64GB of storage available on its bigger cousin.

However, the highlight of the phone is the selfie camera, which sports same as the 24MP unit found on V7+. The 24MP front camera has f/2.0 aperture lens with selfie flash and support for Portrait mode and Beauty mode. There is also a 16MP rear camera with f/2.0 aperture, phase detection autofocus and LED flash. It supports HDR, face beautification and 1080p video recording at 30 frames per second.

Vivo V7 runs Funtouch OS 3.2 based on Android 7.1 Nougat and sports a rear-mounted fingerprint sensor. The smartphone supports connectivity options like WiFi, 4G LTE, Bluetooth 4.2, GPS and is backed by a 3000mAh battery. Vivo V7 will initially be available in Indonesia, but will be availble in India on November 20. The handset is priced around $300 (around Rs 20,000) and considering Rs 21,990 price tag of Vivo V7+, this device could retail for around Rs 19,990.