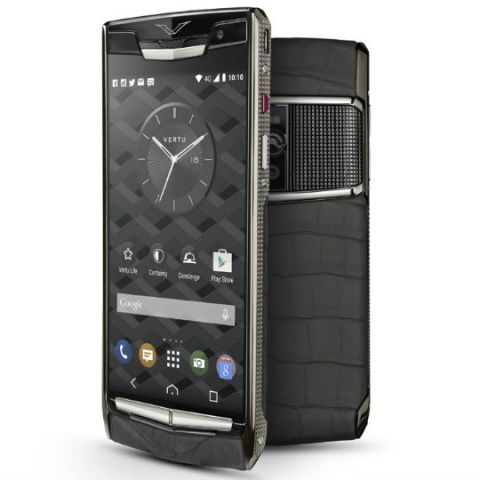 It comes with 5.2-inch Full HD display with pixel density of 428 ppi and protected by a new, fifth generation Sapphire Crystal screen. Under the hood, it has a 64-bit octa-core Snapdragon 810 chipset, coupled with 4GB of RAM. It also comes with a 21MP rear camera with dual-LED flash, phase detection autofocus, f/2.2 aperture, and 4K video recording support. The phone also has a 2.1MP front shooter. It comes with 64GB of inbuilt storage, and supports expansion up to 2TB via microSD card. The whole package is powered by a 3160mAh battery. The luxury smartphone also supports Qualcomm Quick Charge 2.0 and Qi Compatible Wireless Charging. It measures 155x74x10.8mm, and is 4G LTE compatible. The phone will be up for pre-orders from September 28 to October 8, and sales will start from October 16.

The newly-launched Vertu Signature Touch is an upgraded variant of a device with same name launched last year. The major difference between the two is that the predecessor has a 4.7-inch Full HD display with 473 ppi, and is powered by a quad-core Snapdragon processor.

Previously, Vertu has launched three smartphones to its Signature Collection in India. All of these smartphones run on Symbian 40 OS and sport a 2-inch QVGA display. The pricing of these devices start from Rs. 14,00,000. Incidentally, BlackBerry also launched its premium smartphone BlackBerry Porsche Design P’9983 Graphite in India last month. It is exclusively designed by Porsche Design, and has a unique graphite stainless steel frame. It is priced relatively ‘cheaper’, at Rs. 99,990.