Upcoming smartphone Nexus 5 (2015) has reportedly been benchmarked on AnTuTu, and has surpassed all phones with a score of 85,530 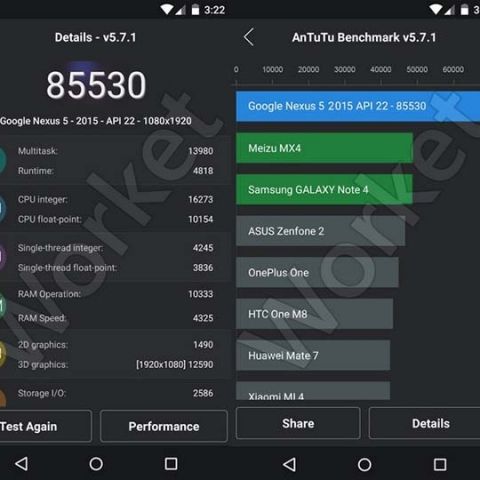 An alleged leak has revealed a staggering AnTuTu benchmark score of 85,530 for the upcoming Nexus 5 (2015) smartphone. This is believed to be a smaller version of the Nexus smartphone, that is being made by LG. Although nothing is confirmed yet, the meteoric benchmark score hints that the new Nexus 5 will be based on a processor that is not yet in use - possibly, the Qualcomm Snapdragon 820.

We had previously reported that LG is planning to base the Nexus 5 on a Snapdragon 808 SoC, the same chipset used in the LG G4. A few other sources had also suggested Snapdragon 810 to be running inside the Nexus 5 (2015). But, if the leaked benchmark scores are true, either of these chipsets can be ruled out. The Samsung Galaxy S6, powered by an Exynos 7420 chipset, is the present leader in AnTuTu scores, with 68,157 points. In our tests, the HTC One M9+, running on a MediaTek Helio X10 SoC, scored 53,834 points. Snapdragon 810-powered Sony Xperia Z3+ scored 49,421.

The possibility of the Nexus 5 (2015) being powered by Snapdragon 820 is strengthened even more owing to recent Geekbench scores being revealed of the upcoming Qualcomm chipset. This also supports previous rumours from LG that the new Nexus smartphone will not be based on its latest flagship. If the scores are true, and the Nexus 5 (2015) does include a Snapdragon 820 chipset, it will be interesting to see if future devices that will feature the upcoming processor will be able to top the staggering 85,530 score.